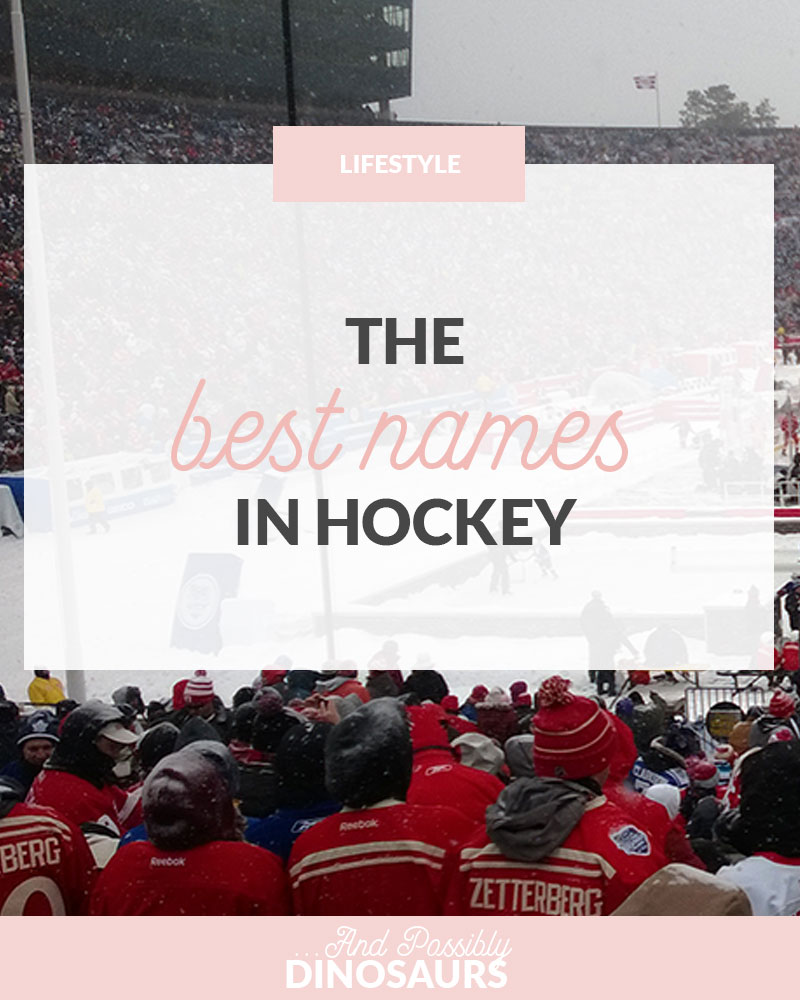 It’s pretty obvious that I like hockey. See here, here, here, and here if you aren’t convinced.

Today, I want to talk about one of my favorite things: the best names in hockey. At least, in the NHL.

The Best Names in Hockey

I love Abby. When I was growing up and my dad and brother would watch Red Wings games, I thought Abdelkader was his nickname. Like Terminator. Nope. Real name.

And he’s American. I remember listing off some Red Wings players to my coworker and including their home country. When I got to Abdelkader, she said “WOAH! Where’s THAT guy from?!” “…Muskegon.”

I don’t really know much about Bjugstad, but I love saying his name. Byooooogstad. It’s just fun.

I’m pretty sure it’s impossible to say “Sergei Bobrovsky” in anything but a Russian accent.

So. Many. Unnecessary. Letters. Why not just spell it Buflin? It’s still fun to say.

I feel like I need to sing Chipchura’s name to the chim-chimney song from Mary Poppins.

It’s no secret that Fil is my favorite hockey player. I even named my cat after him. It’s taken me a long time to figure out how to spell his name correctly, but it’s just awesome to say.

Back when he played for the Red Wings (also known as “the good ol’ days”), we called him Filp. But Randi‘s mom couldn’t figure out how to say that, so she called him Flip. Also good.

Sing it with me: Teenage Mutant Ninja Hertls

A few weeks ago, the Red Wings played the Stars, and the announcers intentionally kept saying Jokipakka’s name. How can you not?! Yurki Yokipakka. It’s awesome. I love the European j-just-kidding-it’s-a-y.

These Fins and their crazy names. Seriously.

I thoroughly enjoy the idea of a man with such a loving name playing a relatively violent sport.

He’s got a V in his name. Not a U. You have to say it with a Swedish accent.

His name reminds me so much of Lupita Nyong’o. Also a great name.

Every time the Wings play the Blackhawks, I laugh at Oduya’s name. Oh do ya? Oh do ya?

If you’ve never heard of TJ Oshie, you just aren’t American. Or you didn’t watch the Winter Olympics last year. Either way, he and his name are awesome.

With a nickname like Ovi, you can’t hate this guy’s name. And he just loves playing hockey, and does some awesome charity work. He’s just great.

I love Jordin Tootoo. One of the biggest crimes in all of hockey is that he no longer wears the number 22. (Get it?!) Oh, and his birthday is February 2. It’s like they planned this.

Which one is your favorite? Is there a player I missed? Let me know in the comments!