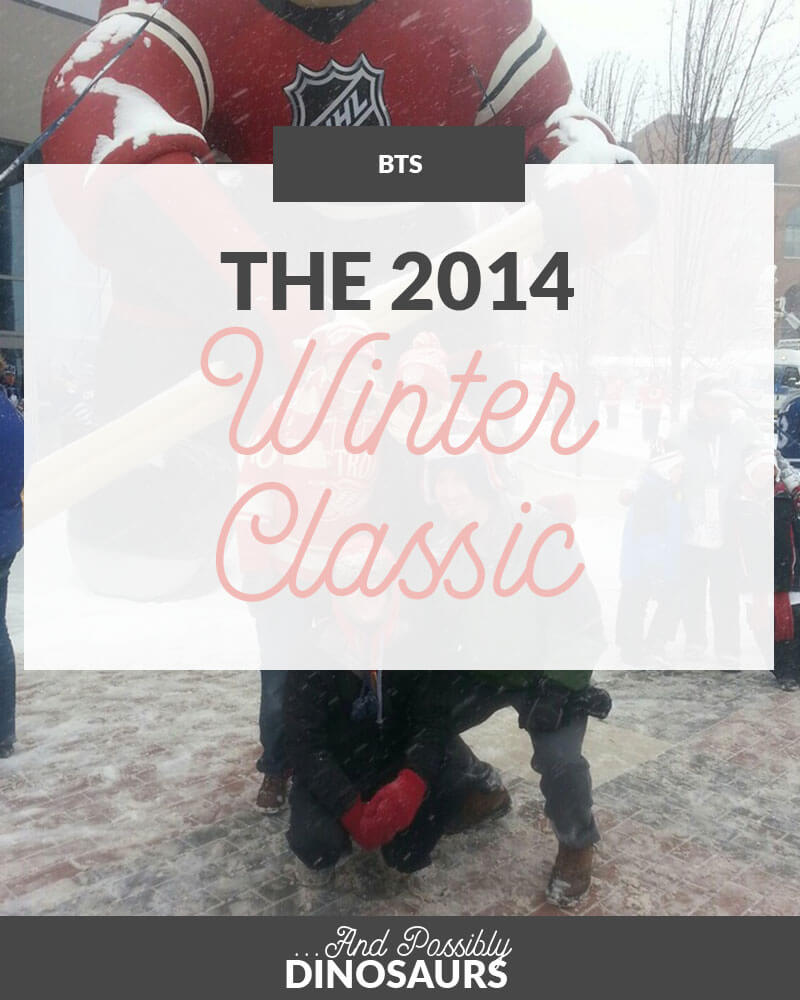 I use the word “fortunate” lightly, because it was 13° Fahrenheit when the game started, and it snowed all day.

I was able to get four tickets total, two of which went to our friends Zach and Aaron. I bought two tickets back in July when I became a season ticket holder to the Grand Rapids Griffins, the American Hockey League affiliate of the Detroit Red Wings. They cost me $135 each, but I was expecting them to be $300 or more each, so I was happy to pay it for this once-in-a-lifetime opportunity.

Then, of course, the weekend before the big game, I got a call from my boss saying he had two tickets to the Winter Classic that were mine if I wanted them. I explained that I already had tickets, but I knew some people who would want to go if given the chance. He agreed, and Sean and I took my boss’s tickets and gave ours to Zach and Aaron. So really, all things considered, $270 for four tickets to the big game wasn’t a bad deal at all.

We did much more research this time around, because our first Red Wings game was a mess–we walked roughly five miles and had giant blisters on our feet by the time we got to our seats. With 105,000+ people in attendance, we knew we had to have a plan in advance.

Arriving at the Big House

We had discovered that there would be free parking at Briarwood Mall, and a $4 shuttle would be running from 9 a.m. until the start of the game, so we got there around 10 and found a close parking spot.

We made sure to stop at the bathroom before heading to the bus–105,000+ people and 5+ layers of clothing meant there wasn’t going to be much opportunity to relieve ourselves.

We only had to wait about 15 minutes for the bus, which was (of course) full of Maple Leafs fans. I heard two references to Tim Horton’s and at least three “eh”s in the five-minute bus ride to the Big House. They were definitely Canadian.

One of the highlights was definitely the fan zone outside the Big House before the game. There really wasn’t anything else to do, and at first it seemed like a let down; there were plenty of things to do, but the lines for all of them were too long and we knew we wouldn’t make it to the front in less than 45 minutes, so we skipped them all.

All except, of course, the merchandise tent. The line was really long and it was really confusing on the inside, but it helped us kill some time. We each got a hat and a scarf, and I got a winter headband for when my hair is in a bun or pony tail and I therefore can’t wear said hat. We spent a lot for the five items, but they’re limited edition and will be really cool to have in the long run.

Sean decided to spend the big bucks and get a beer while we waited for Zach and Aaron, but I passed. The thought of drinking anything cold was appalling to me at the time. (And sure enough, as Sean’s beer was running low, it froze at the bottom of the cup.)

We walked around the fan area for a while and found some pretty cool things to entertain us: ice sculptures for each team, giant inflatable hockey players, men on stilts, and an awesome band from Grand Rapids performing some covers. We tried to dance to warm up, but it just didn’t work. I also feared falling on my face when trying to dance, so for my own safety I stood still. 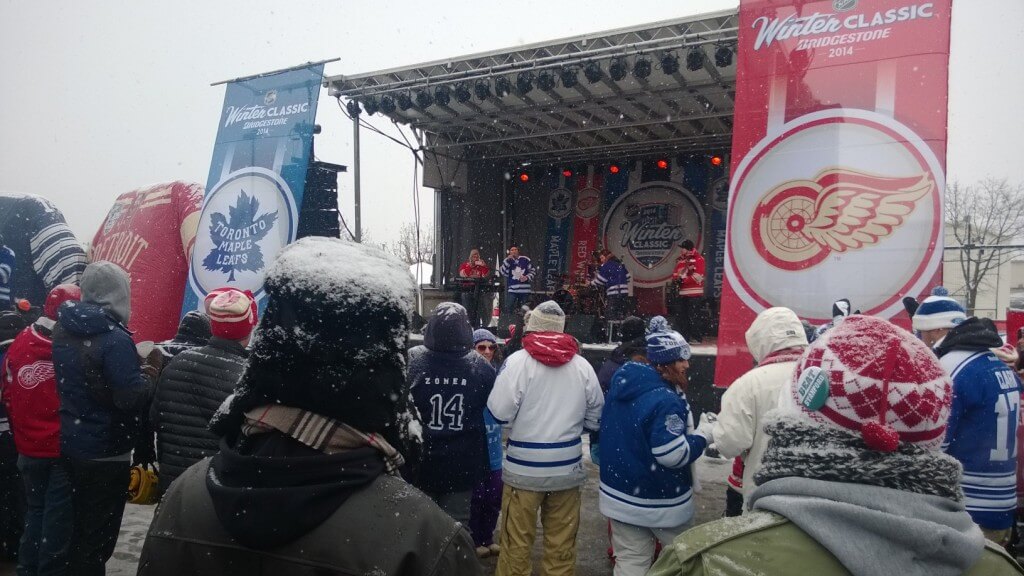 There was a band from Grand Rapids playing in the fan area before the game. They were pretty much the highlight because everything else had lines that were 45 minutes or longer.

Once we found Zach and Aaron, we went into the Big House to find our seats. We almost wiped out several times thanks to the several inches of snow that had accumulated since the morning (and of course our section was on the opposite side of the stadium as the entrance), but we made it to our seats virtually unharmed.

The game itself was awesome, despite the freezing temperatures and the regular breaks to shovel large quantities of snow off the ice. Being in the Red Wings section when Daniel Alfredsson scored the first goal of the game was surreal–a wave of emotion felt by nearly everyone on that side of the stadium.

I’m pretty sure I didn’t move the entire game; I just sat on my free seat cushion (huzzah!) and huddled with myself as much as physically possible in the close quarters. Michigan Stadium might have a capacity of 109,901, but that doesn’t include the puffy coats and dozens of layers everyone had on during the Winter Classic. There definitely wasn’t any personal space. But that was just part of the big experience, so I didn’t mind.

We ended up leaving after the second period because we were both honestly a little worried our toes had become frostbitten. Zach and Aaron stayed behind, so we caught the bus back to the mall, grabbed some Panda Express, and hit the road for home.

The drive home was definitely the worst part: it took us two hours to get from one side of the mall to the other. The drive that normally takes a little over two hours ended up taking almost five and a half, but at the end of the day, I’m glad we went and are able to say we were part of history.

Next time, though, I think I’ll stick with an indoor hockey game. 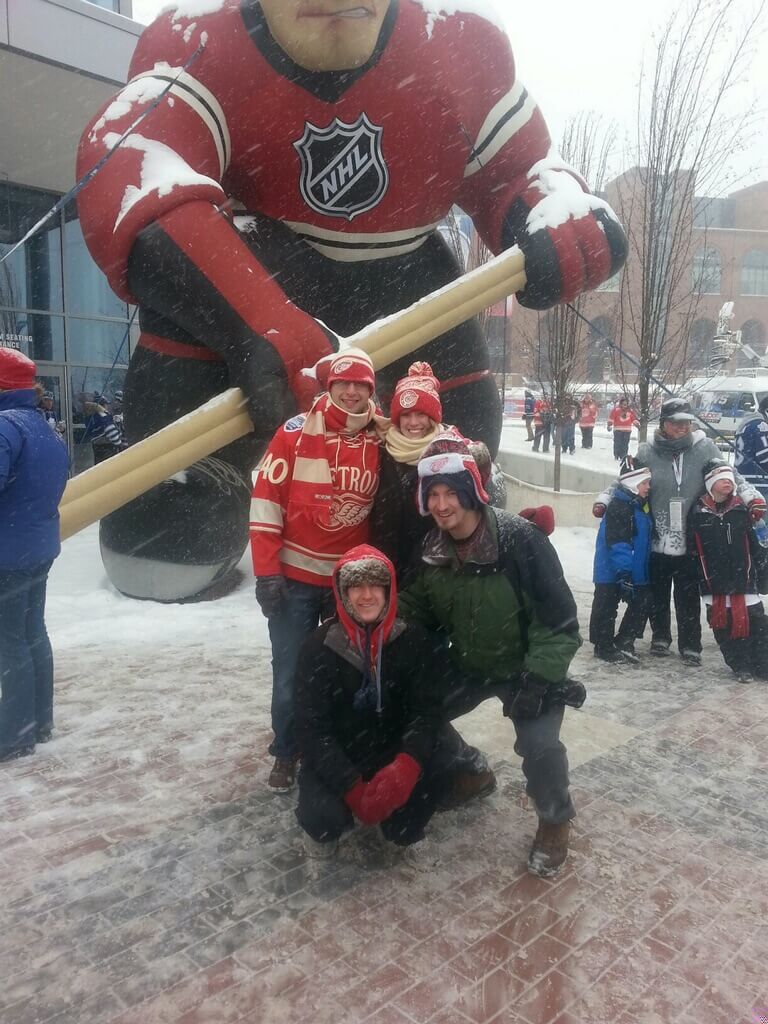 Family photo: Sean and I with our two sons, Zach and Aaron. 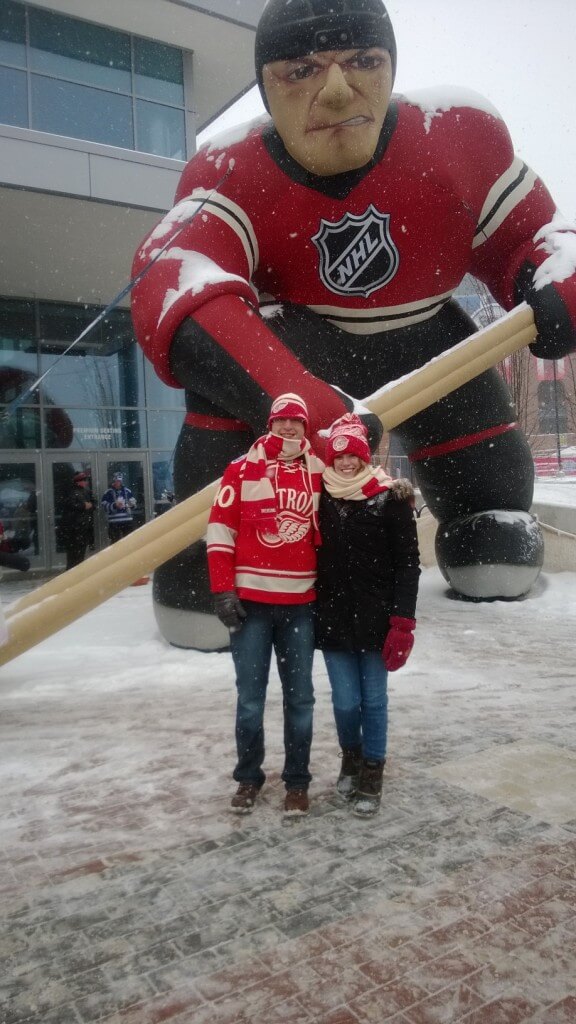 Sean and I in front of a giant inflatable hockey player. 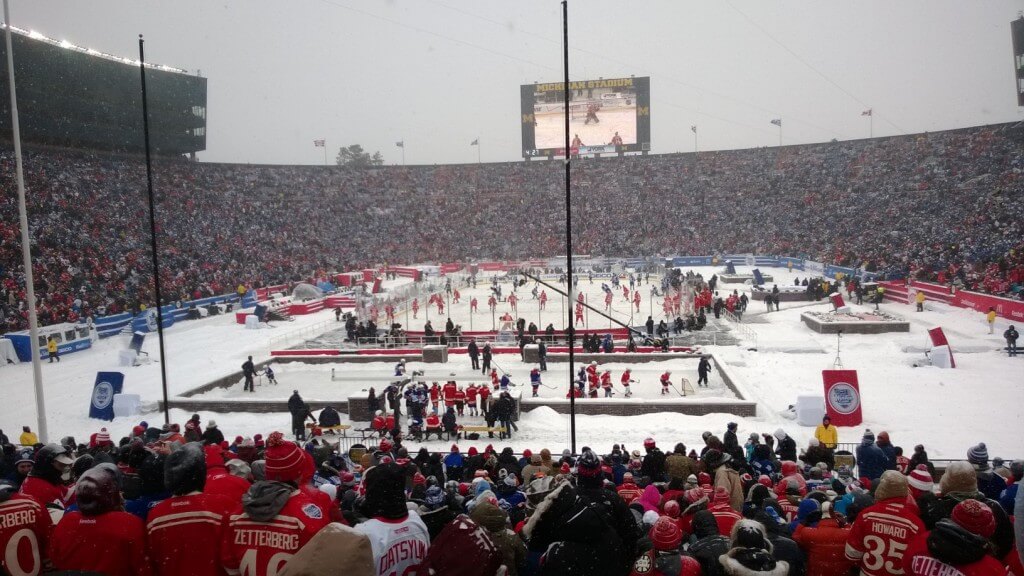 We had really good seats thanks to my awesome boss! 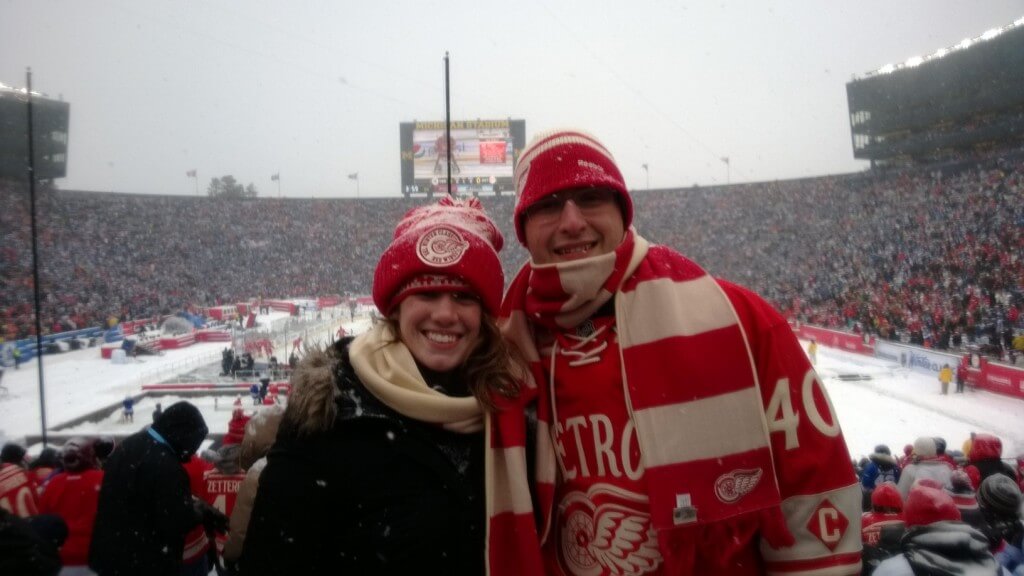 It was VERY cold at the game. Luckily, Sean and I each got a scarf and a hat, and I got a winter headband that fit underneath my new hat. 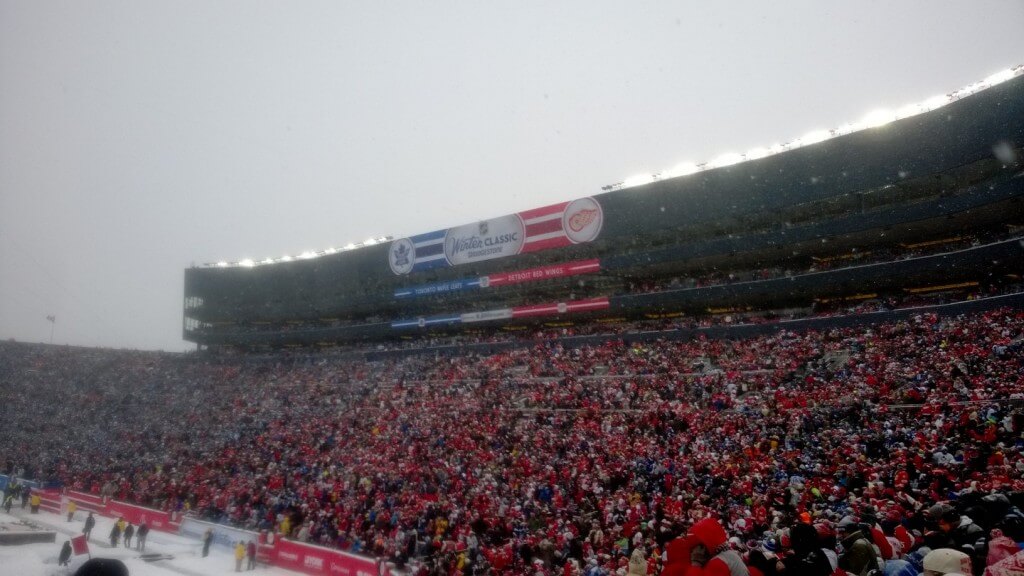 I loved being able to see the dividing line between the Red Wings side and the Maple Leafs side. There were some outliers on both sides, but it was still an awesome sight.