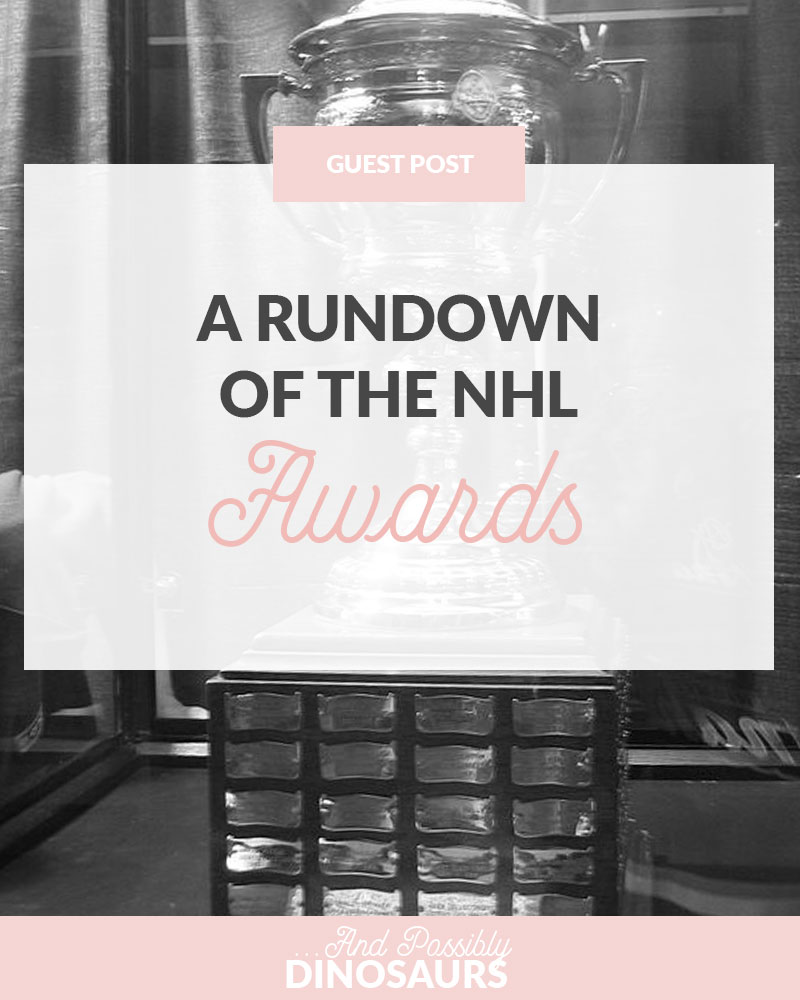 After a brief hiatus (which felt like forever), Ashley Hufford of Under the Ash Tree is just about done with her work at the NHL for the summer. Which means she’s able to do more blog writing again! 🙌 And how lucky am I that she gets to end her hiatus with a guest post on And Possibly Dinosaurs?! She’s going to share the different NHL Awards and how the winners are decided. They’ll be given out tonight, so be sure to tune in to find out the winners!

Take it away, Ashley!

The NHL Awards are one of my favorite events of hockey season. It’s a time to let the pain of the previous few months fade away (because yes, the season always ends painfully for 29 NHL teams… Congrats Blackhawks) and instead focus on the best moments and players of that year! Tonight’s awards will be spectacular without a doubt: big name presenters, colorful Las Vegas scenery, various musical guests.  But as always, the hockey community and the NHL players are the driving force and most important part of this event, and it is so much fun to honor the best game on earth!

The trophies themselves are historic; most are named after influential hockey figures and the same trophy is given out each year! While this is epic, it also can be confusing because a player taking home the “Ted Lindsay Award” or the “Hart Memorial Trophy” doesn’t make much sense if you don’t know what those trophies mean. Caitlin asked me to help clear that up for you so that you can watch tonight and know what every major award is and root for your favorite player to take it home!

There are two types of awards: awards that are won based on numbers, and awards that are voted upon, by the players, the media or various other hockey factions. All awards are based on regular season performance, so playoff gamess aren’t included!  I’m going to start with the numbers-based awards:

NHL Awards Based on Statistics

This award is given out to the player who has the most points (goals and assists). This year, Jamie Benn, captain of the Dallas Stars, won with 87 points.

This award is given out to the player who scores the most goals. This year, Alexander Ovechkin, captain of the Washington Capitals, won with 53 goals.

This award is given out to the goalie(s) who have played at least 25 regular season games and has the fewest goals allowed. This year, this award is shared between two goaltenders: Corey Crawford of the Chicago Blackhawks and Carey Price of the Montreal Canadiens.

NHL Awards That Are Voted On

The Jack Adams award is given out to the “Best Coach” as decided by the NHL Broadcasters Association. It’s always complicated and hotly contested because NHL coaches are amazing. But this year, I think it’s especially hard because so many teams went farther than expected, and a lot of that was due to coaching.

The Masterton is a bit of an odd award for people to understand, as it is entirely based on the opinion of the Professional Hockey Writers’ Association (PHWA). It is awarded to the player who “best exemplifies the qualities of perseverance, sportsmanship, and dedication to hockey.” Last year, Dominic Moore of the New York Rangers won, as he came back to play following the death of his young wife from cancer.  The year before, Josh Harding of the Minnesota Wild won for playing most of the season despite being diagnosed with multiple sclerosis.

The Selke is also a challenging one to explain. It is awarded each season to the forward who shows “the most skill in the defensive component of the game.” It’s not about goals, but more about blocked shots, hits and puck play. It’s also voted on by the PHWA.

The Lady Byng is also known as the sportsmanship trophy. It’s usually given to players who don’t have a lot of penalties and are generally known to be exceptionally good players on and off the ice, voted on by the PHWA.

Every award is important and valuable, but this one is especially meaningful because it is given out to the best rookie of the season. The player, voted on by the PHWA, must been under 26 and have not played more than 25 games in any previous season.

The Calder proves that no matter where you are drafted or how big you are, you still have a chance to make it in the NHL.

Defensemen have the toughest job in the NHL.  They have to see the ice better than nearly everyone and are expected to lay themselves on the line to keep the puck out of the net. The Norris trophy, voted on by the PHWA, is awarded to the player who shows the “greatest all-round ability” in that position.

The Vezina is given out to the best goalie in the NHL. It’s not based on wins or numbers, but instead voted upon by all 30 of the NHL General Managers.

The final two awards seem pretty similar, but the difference is who votes on it. The Ted Lindsay is the best player in the NHL as voted by the players. It’s not the most important award, but the players often say this is the most important to them.  There is no greater honor than being called an MVP by your teammates and competitors alike (other than winning the Stanley Cup itself, obviously.)

The Hart is the MVP of the season, voted upon by the PHWA. It is by far the biggest award given out each season and is always presented last.

I am so excited to see how the Awards go tonight and I cannot wait to see who takes home the trophies!