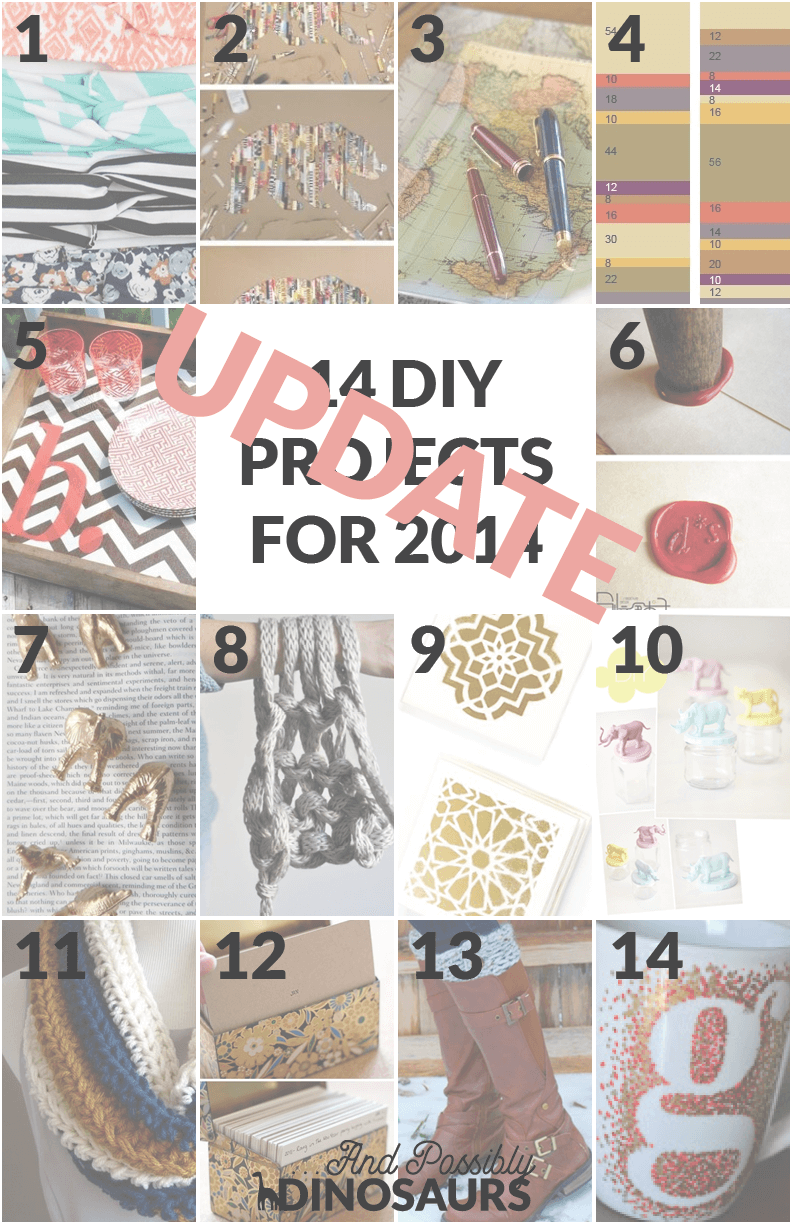 First of all, what were the projects I was planning on achieving?

Now let’s look at what I started, completed, and completely forgot about.

Sean and I started this project, drawing and cutting out dinosaur silhouettes to cover with magazine strips. We’ve also got the spots picked out on the walls for these. Now we actually have to cut the strips out and decoupage it onto our canvas. But the dinosaur silhouettes have sat around for about six months, so who knows how long that will take for us to actually do?

This was the DIY project I was most concerned about for two reasons. because the plate has to be curved without a round base for stabilization. Then we had to decide on a location and style of the map. We ended up finding the plate and know that we want to have a map of Dubrovnik on it, but we haven’t found one we like enough.

I bought the craft kit from Darby Smart for this DIY project. Now we either need to wait until it gets warmer or take them over to my parents’ house and swipe their garage for an hour or two. Once we get the motivation to do that, the actually making of these coasters will be easy.

That’s right. I only completed one DIY project from my list. In an entire year. I decided to do them in February and made them Olympics themed. They didn’t end up sticking around, though, because the animals fell off. Maybe the failure of this DIY project is what made me lose my motivation for the rest of them.

DIY Projects I Completely Forgot About

I don’t really wear headphones any more, so this one completely fell off my radar. Plus I don’t have my own sewing machine, so this DIY project would have been way more work than it is worth.

I’ve made a ton of scarves lately, but I would have to invest in a ton of colors for one scarf, and then I’d be left with a ton of useless scraps. At this point, this DIY project isn’t worth the time and money.

I’ve actually got no need for a tray, and I don’t have much room for it. I like the look and the idea, but right now this DIY project just isn’t the right fit for me.

Okay, so I didn’t exactly “completely forget about” this DIY project. I just decided that it isn’t the type of thing I should DIY. I got a really cool wax seal in Venice that has a C on it, but I haven’t used it because I like the set it came in, and I don’t want to ruin it. I then found an Etsy shop of wax seals that I’m obsessed with, and I’ve already ordered two. It’s not crazy expensive (although they do take a while to arrive), and they’re going to work out a lot better than a DIY project wax seal would.

I might still do this DIY project of animal magnets (with dinosaurs, of course). Right now, though, we don’t use many magnets in our apartment, so it seems like this DIY project isn’t the best use of time and money.

As stated before, I make a lot of scarves that I’m really happy with, but none of them have been arm-knit. It’s something I’m interested in learning, but I’ve got a ton of other DIY projects that take a bit more precedence than this one right now.

Same as before. I prefer to spend my time making DIY projects for gifts or for my Etsy shop, and I would have to invest in specific yarn for this one. Plus, as much as I love these colors, I don’t have any jackets they would match, so this DIY project is on hold for now.

This is a fun DIY project idea, but the TimeHop app on my iPhone already does it for me, so it seems silly to invest time and money in it.

I wore boots a lot more in college than I do while I’m working, so this DIY project doesn’t seem practical for me. It might be good to try out so I can sell them on Etsy, but it’s not the right DIY project for me right now.

We have waaaaay too many mugs for how small of an apartment we have. Sean already made me pare down my collection significantly (the rest are at my parents’ house until we get a bigger place or one breaks), so a mug DIY project just doesn’t make sense for us right now. Which is a bummer, because I love mugs.

Have you started many DIY projects this year? Have you completed all of them? Let me know in the comments!