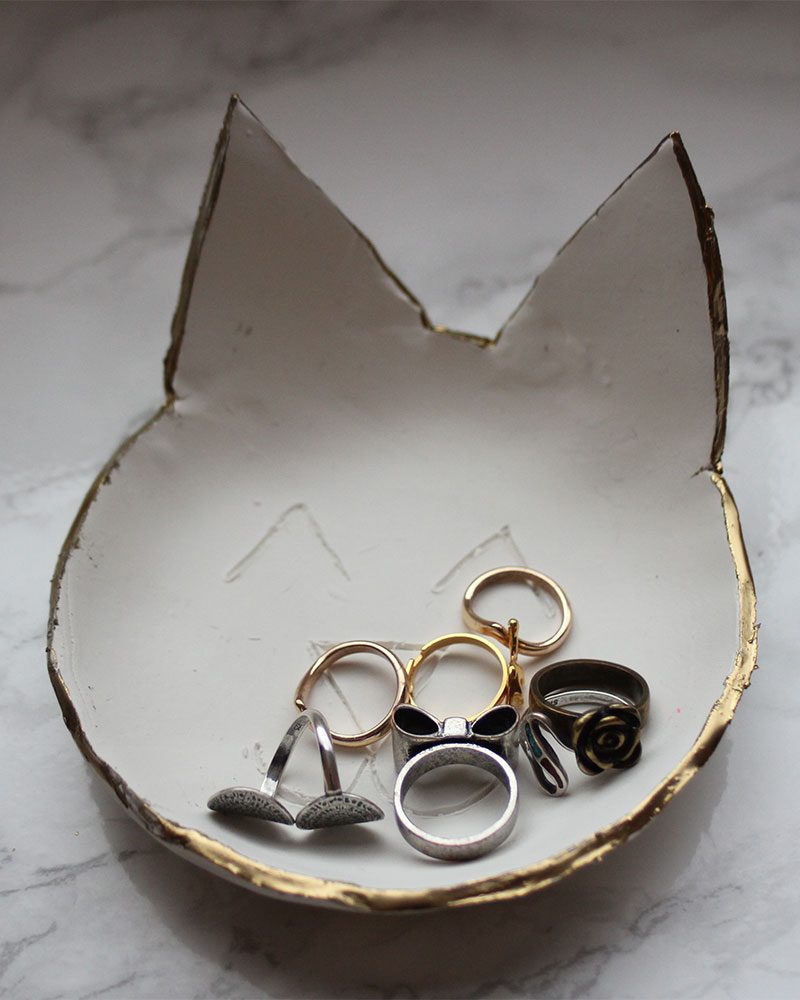 If you’re on Pinterest, you’ve probably seen A Beautiful Mess’s marbled catchall bowls. They’re one of the most recreated DIY projects I’ve seen, and for good reason. They’re super easy and super cute.

I started making my own, but then I got to thinking: how can I make these diy clay bowls my own?

Then it hit me: add some triangles to the top and voila: a cat!

It took me two tries to get the bowls right, but it’s super easy now that I know what proportions to use.

Here’s what you need: 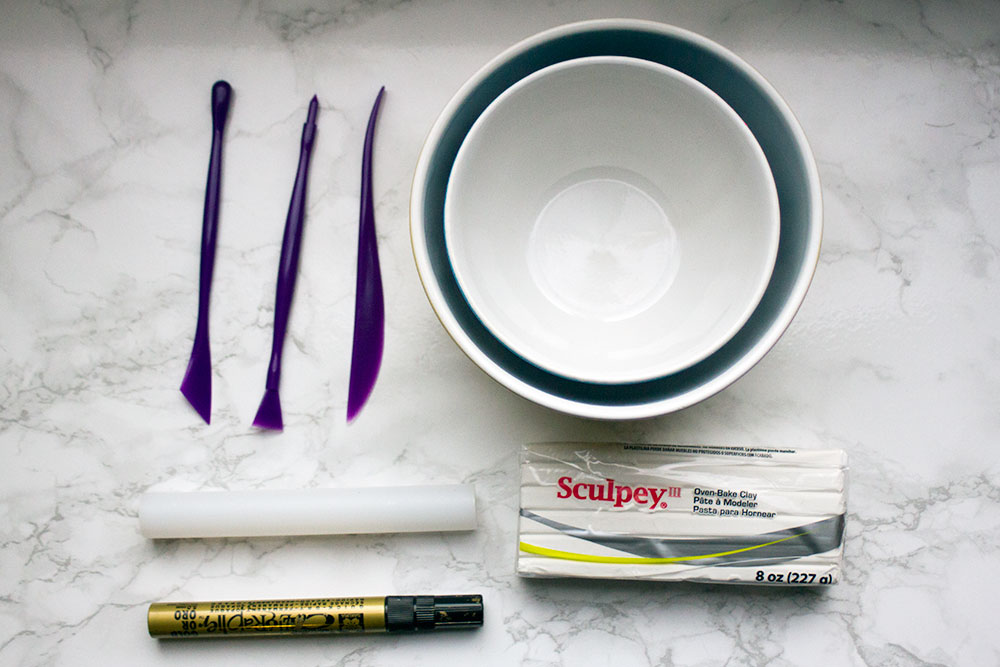 In my first attempt, I used a 4oz package of hot pink oven-bake clay to make the bowl. I absolutely loved the color, but there wasn’t enough clay leftover to make ears big enough, so it looked a little wonky.

I’ve also made bowls that are too thin and break really easily while I’m trying to paint the edges, so I recommend using more than you think you’ll need. I didn’t use the entire 8oz block of clay, but it was nice having plenty on hand in case I needed it. 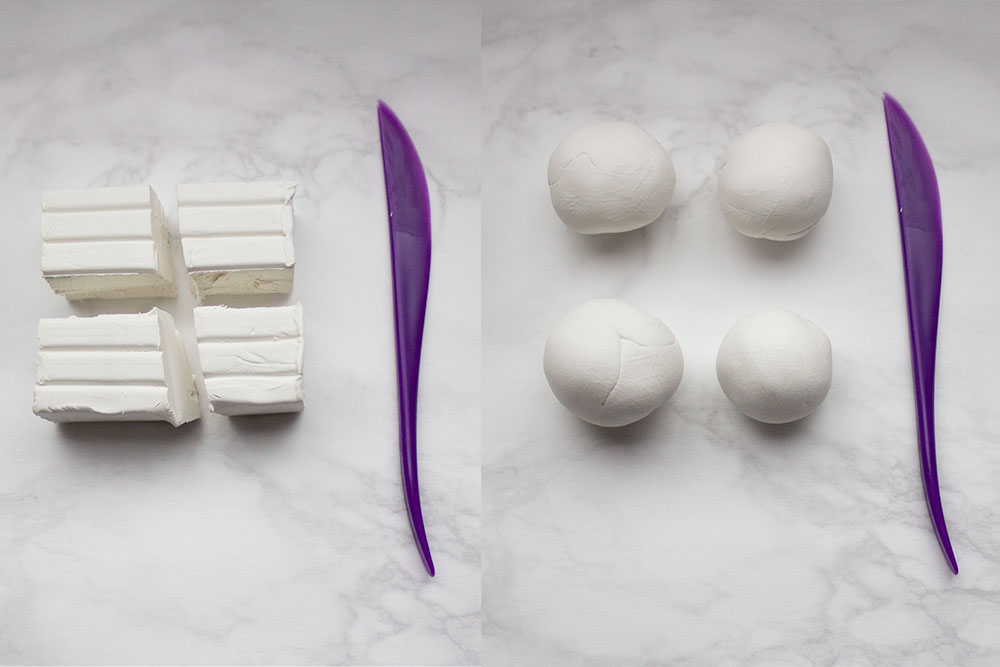 First, you’ll want to roll out the clay and get it nice and soft. I recommend rolling it out onto parchment paper, because it’s easier to get the clay from the counter to the bowl when you can just peal it off some parchment paper. Plus, it leaves a smooth edge, unlike some cutting boards.

I cut it into several chunks first so I could handle it a bit easier. Then I combined it all into one big blob.

Then you’ll want to take your rolling pin (or jar or pint glass) and flatten it out to the desired thickness. Just make sure whatever you use to roll out the clay doesn’t have anything that will leave impressions in the clay. You want it to be as smooth as possible. 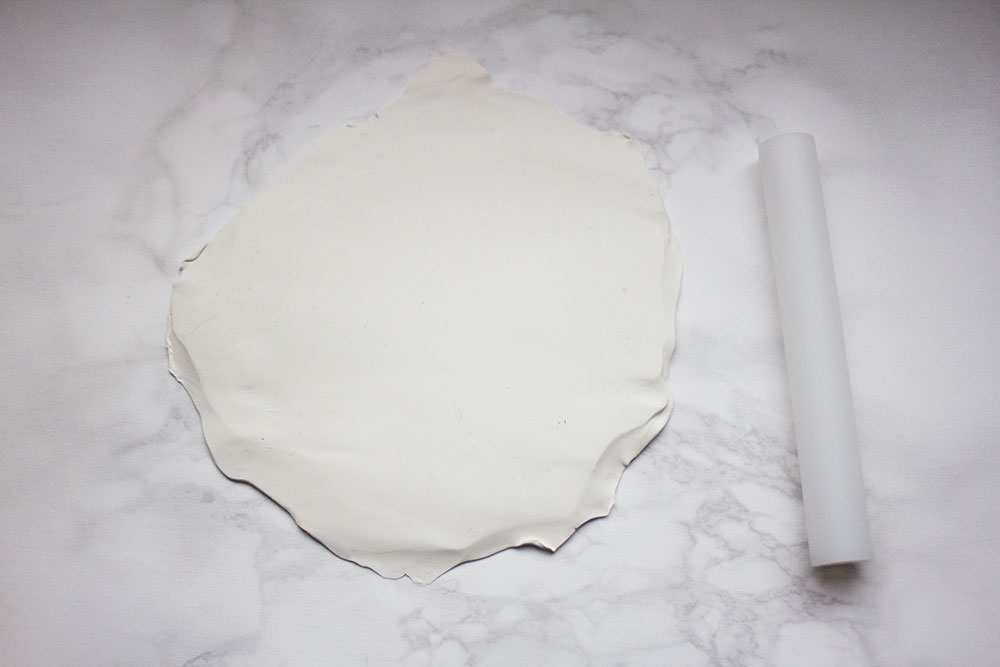 I’d recommend rolling it out to no thinner than 1/4 inch.

Step 2. Cut the shapes out of the clay. 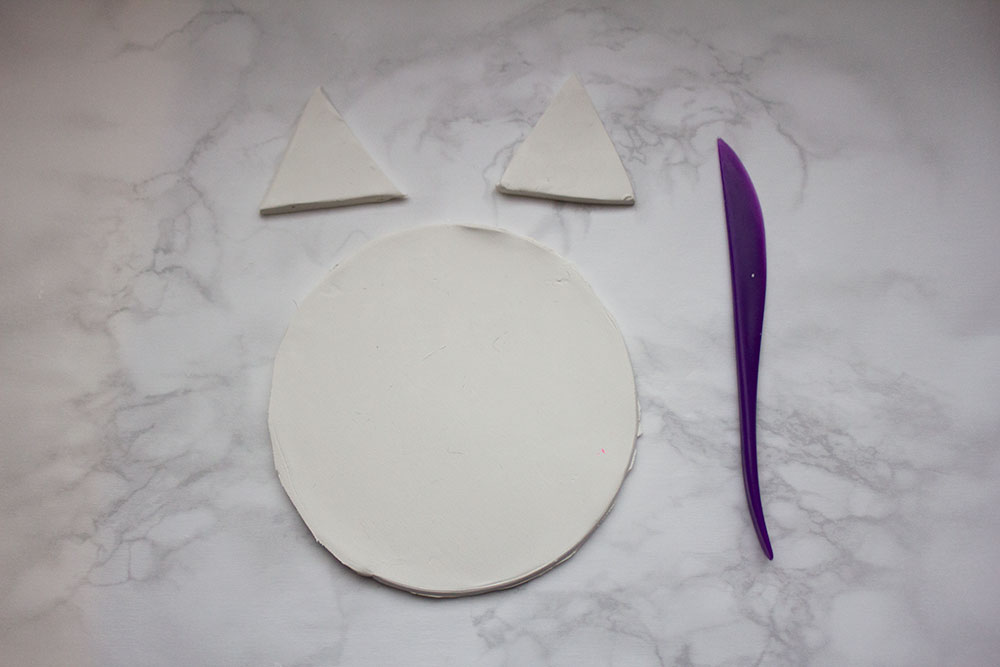 Once you’ve got it rolled out to the desired thickness, cut a circle out of the clay. I used a bowl as my guide, but you could use a glass or even a cookie cutter.

Trim off the excess and roll it back into a ball.

Then flatten it back out to the same thickness and cut two triangles out.

Another option would be to cut out the entire shape at once. Lay the bowl (or other circular object) onto the clay, cut around half of it, and then add the the ears to the top. That might make it sturdier.

Step 3. Put it all together. 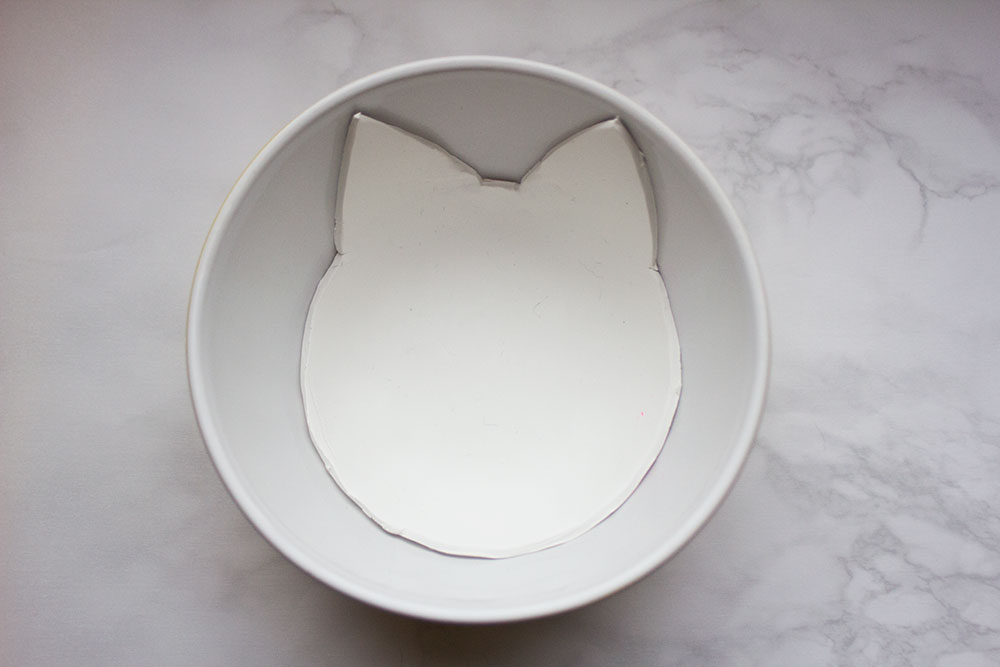 Position the triangles where you’d like them and smooth the clay together with your fingers. Make sure they’re really stuck together, though. I’ve already had an ear fall off once. I plan on gluing it back on, which shouldn’t be a problem. It just won’t be as pretty.

Once you like the way it looks, peel it off the parchment paper and put it in the bowl. Gently push the clay to the bottom of the bowl.

Once the clay is settled, use a pencil or x-acto knife to draw a cat face in on the bowl. 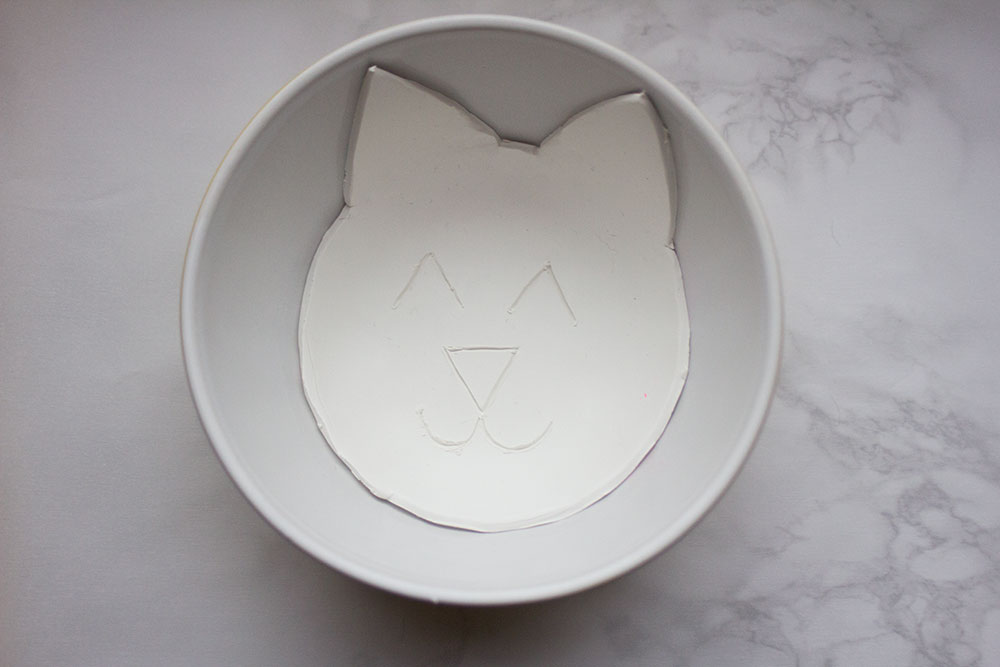 Then pop it in the oven according to the directions on the package!

Once it’s out of the oven, let it cool for a few minutes. Then take your gold paint pen or gelding paint and decorate the edges! 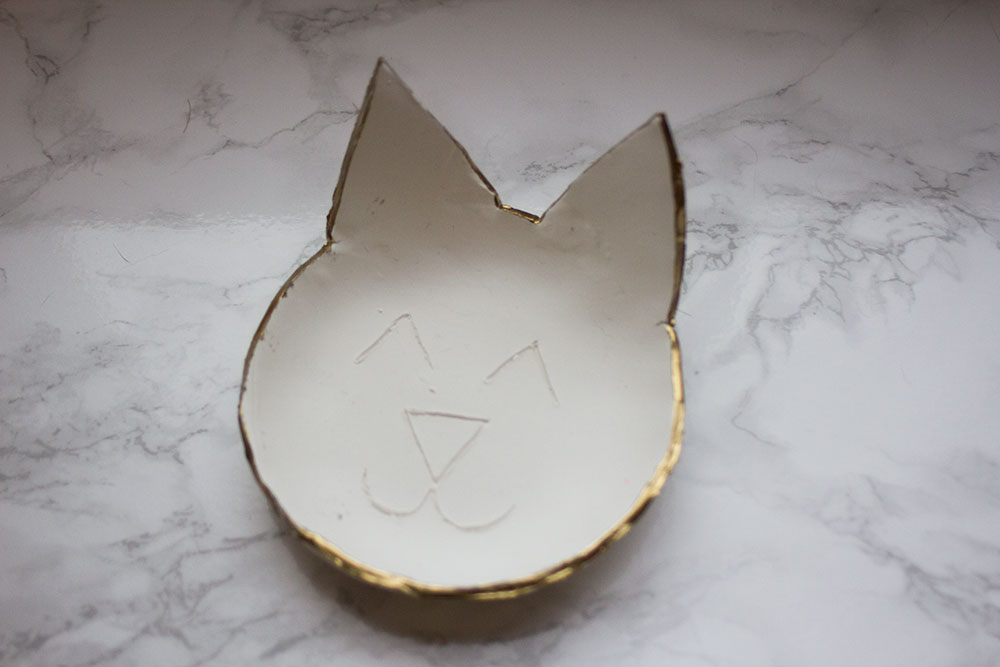 A word of warning about the gold paint pen, though: make sure there’s a lot of paint on the tip of the pen, because if it’s too dry it will scratch the clay right off. It would probably be easier to just use gold paint instead.

I’m super happy with how it turned out! Just make sure you are lifting it from the bottom. The ears are pretty fragile, so don’t lift the bowl up by the ears.

There are so many options, too. You could marble the clay beforehand or paint it after so it looks like your own kitty.

What animal would you make? 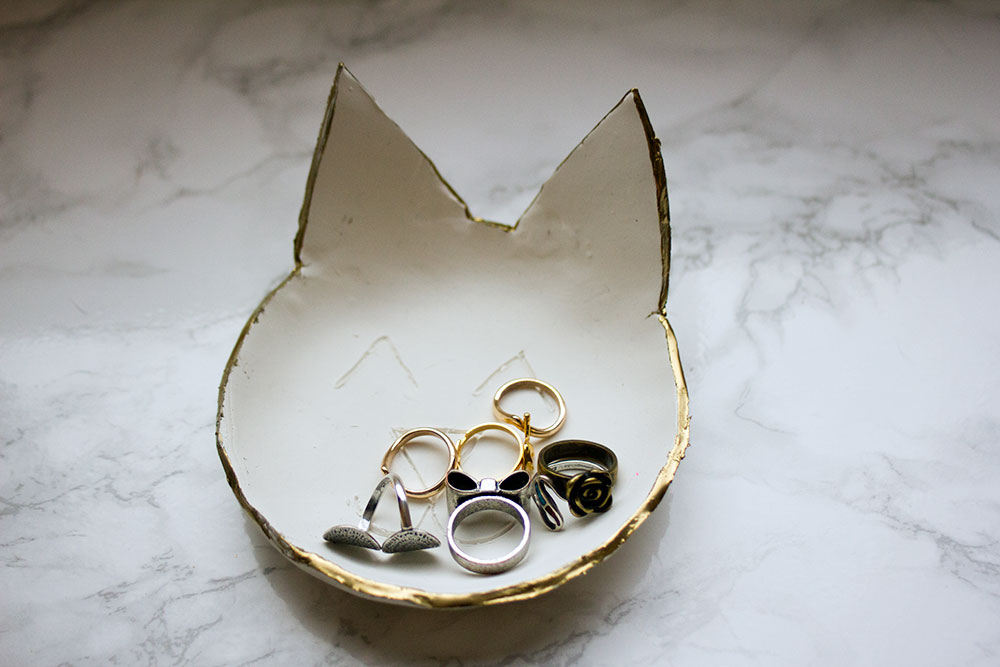