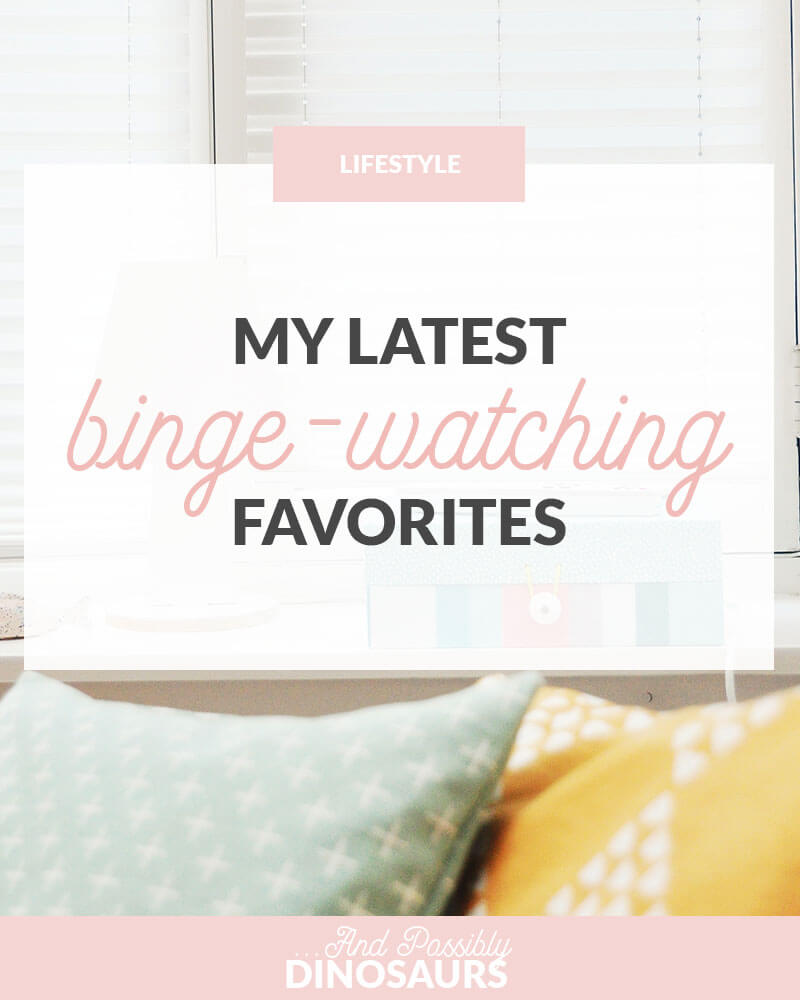 You know what really sucks? Being sick.

I’ve had a bad head cold for the past few days, and all I’ve wanted to do is sit on the couch and binge-watch tv shows on Netflix and Hulu. But, alas, I still had work to do.

I can still dream, though. Here are my latest binge-watching favorites.

Netflix is everyone’s favorite, amirite? If you only want to pay for one subscription service, this is the one to go with.

Who doesn’t love Amy Poehler? I mean, seriously. Then throw in liberalism, Chris Pratt, Rob Lowe, and Aziz Ansari and you’ve got a recipe for success. Unfortunately only the first 6 of 7 seasons are on Netflix.

Sean suggested we watch this one, and I was pretty apprehensive. We watched the first episode and were super confused. We had no idea if we even liked it or not. But, by the end of the second season, we were super sad to see it go. It’s kind of like the Scary Movie of The Office / Parks and Rec. And who doesn’t love Portia de Rossi?

I heard a ton about this show as it was ending, so naturally I jumped on the bandwagon. There are a ton of characters, so it’s a bit confusing at first, but it’s really an enjoyable show. It tends to get a little soap-opera-y at the end. They really touch on every issue involved in Parenthood. But hey, it’s good TV!

Another superhero movie / tv show? Yes please! I didn’t know a ton about Daredevil’s story line, but I’m hooked now. A kid becomes blind and learns a ton of martial arts. Oh, and he can basically see by listening. As an adult, he becomes a lawyer by day and a crime fighter at night. I can’t wait for Season 2!

This was another tv show Sean and I started watching based on hearsay. After the first episode, we were a ton more confused than we had been before we watched it. But, by the end of the season, we didn’t want it to end! We still don’t really know what’s going on, but it’s super enticing. Luckily it’s been renewed for a second season!

Need I say more? Plus, they’re coming out with a four-episode reboot. Yes please!

Hulu isn’t quite as good as Netflix on two fronts: a) the quality isn’t as good, and b) you have to pay extra to be free from commercials. But, alas, there are still some good reasons to pay for it.

Ah, yes, we meet again. Remember how I said Netflix only has seasons 1-6? Well, Hulu’s got season 7 covered for you. You can easily get it done within the free trial period. BUT there’s one reason I continue to pay for Hulu even after finishing Parks and Rec…

Yup. You read that right. All seven seasons of Sabrina are on Hulu. Guess what I’ve been doing nonstop since I got sick? Wishing I were watching Sabrina, with a bit of watching Sabrina mixed in there. It really reminds me how weird the 90s were.

My list wouldn’t be complete without one last honorable mention:

Seriously. This show / book series is absolutely amazing. If you aren’t reading and/or watching it already, please for the love of god and all that is holy, start now.

What are your current binge-watching favorites? Let me know in the comments!