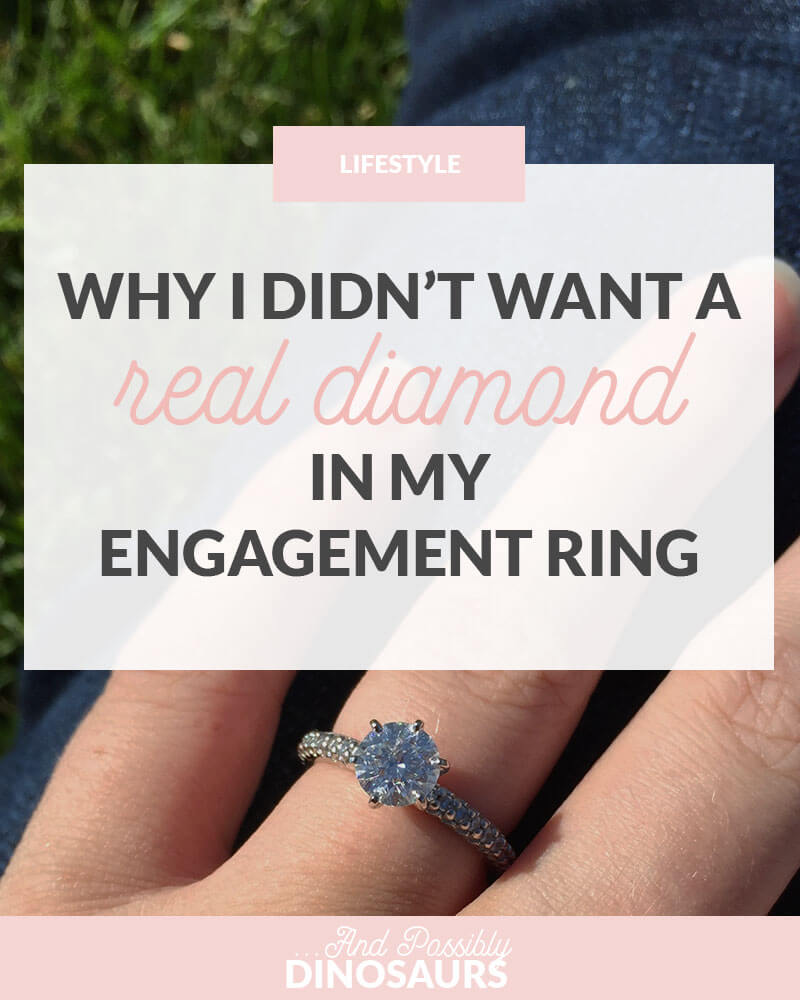 As you may have heard, Sean and I got engaged back in September, and I couldn’t be happier!

One question I got quite a bit when we first got engaged was whether or not the diamond is real. Most people were joking, and they weren’t expecting me to say that it isn’t. But I didn’t want a real diamond in my engagement ring.

When Sean and I first started talking about getting engaged, he asked if I wanted a real diamond or not. At first I thought “well of course I do.” But then I started to really think about it, I didn’t have a good reason why.

I did know a few things, though:

So, the last question mark was what kind of stone. And the more I thought about it, the less I wanted a real diamond.

I was heavily involved with Invisible Children back in college, and the last thing I wanted was a blood diamond.

For those of you who don’t know, a blood diamond is a diamond that is mined and sold to fund civil wars. Typically, they’re mined by slaves and fund conflicts in Africa, which is why it is so close to my heart.

Sure, there are certifications that say a particular diamond is conflict-free. But because the trade is so elusive, it’s hard to know for sure whether or not it’s a blood diamond.

You know what’s a surefire way to know whether or not you’re getting a blood diamond? Don’t get a diamond at all.

Sean did lots of research, because that’s what he does, and found an awesome rock. It’s called an Amora Gem, and it’s only made in one lab in Washington state.

Oh, and it naturally occurs in space.

So, not a blood diamond? Check. Bonus: fun space fact.

But, even better, it’s sparklier and less likely to chip than a diamond.

And, amazingly, it’s much cheaper than it’s diamond alternative. Because we like being smart with our finances, too.

So there you have it. Diamonds aren’t the only stone you can get in your ring. By all means, get a diamond if you want one. But just know that you don’t have to simply because it’s traditional.