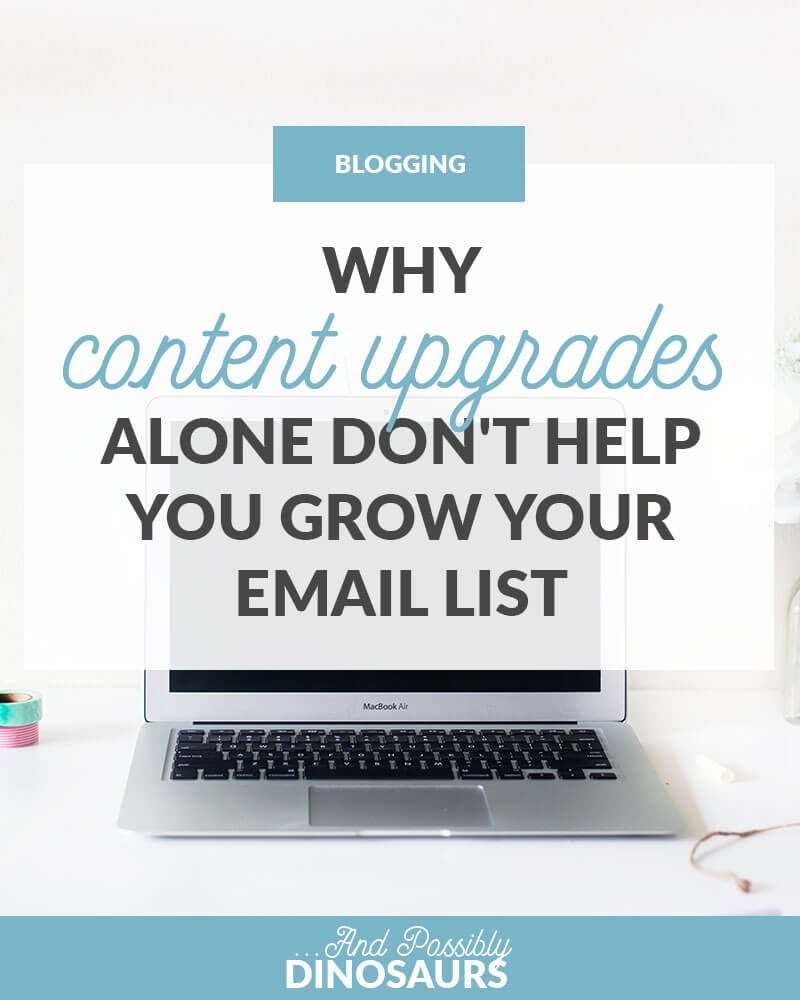 But it’s time to be honest about content upgrades for a second.

Don’t get me wrong: content upgrades are an awesome way to gain subscribers. We’ve talked about this a lot before.

So, what the heck are you talking about, Cheevers? Isn’t gaining subscribers the same thing as growing your list?

Imagine this: you’re reading a blog post and sign up for the blog’s email list in exchange for an awesome worksheet. You download it, fill it out, and immediately get the benefit from it.

But you don’t get any emails from them, so you forget that you’ve signed up for their email list.

Then, a month later, you get a random email from this blog you think you’ve never heard of.

Sound familiar? I do this a lot.

So, while you may be gaining a lot of subscribers from your content upgrades, it’s possible they’re not sticking around.

If you’re not sending out valuable content regularly, your subscribers won’t recognize your emails in their inboxes.

If they don’t recognize you, trust you, or see the value in your emails, they’re going to unsubscribe.

So, sure. You’ll get a lot of subscribers to your email list. But as soon as you send out an email? Your numbers are going to go waaaaaay down.

Why Your Subscribers are Leaving You (& how to keep them around!)

As someone who highly values Inbox Zero, I’ll admit: I unsubscribe liberally. I don’t have a ton of time to spend in my inbox, so the fewer emails I have to sort through, the better.

So, what are some of the most common reasons your subscribers are leaving you?

First things first: are you providing value to your subscribers?

If you’re not providing high-quality content, they’re not going to see the value of your emails.

Inboxes are incredibly personal and valuable real estate. If they don’t see a good reason to keep you around, they’re going to kick you out of their inbox.

What to do instead: Offer up good shit! Always make sure you’re offering up high-quality content to your subscribers.

This can come in a lot of different forms. For some people, it’s an RSS feed of your most recent blog posts.

Not sure what your email subscribers consider valuable? Ask! Try out a few options and see what does the best, or send out a reader survey asking what content they look most forward to.

So, you’re giving out awesome content. Great! Now, when are you sending it? Whenever you think of a good topic to send out?

If you’re sending out emails at random, you’re going to confuse your subscribers. People love consistency, so if you send them an email on Monday one week, on Thursday the next, and then don’t send anything for another two months, they’re not going to remember who the heck you are.

Plus, a new subscriber should never have to wait more than a week for an email from you. They signed up because they want your content, so give it to them!

What to do instead: Create an editorial calendar for your newsletter and stick to it!

For example, I send out my emails on Monday mornings. Other people send them on Thursdays or Sundays. It’s up to you! Simply choose a day and time and stick to it.

There will be days you don’t feel like writing. I get it. But stick to it as best as you can! Even if you need to send it out a few hours late, make sure you’re sending it out. It’s better to send it late than give yourself a pass and then start slacking on your editorial calendar consistently. (Not that I know from experience or anything…)

Okay, so let’s say you’ve got your newsletter calendar all figured out. You’re going to send out emails on the 21st of every month.

Think about how many emails you’re getting every day. Too many, right?

This doesn’t mean you should be sending emails less often to appease your subscribers. It means you’ve got more competition for their attention and memory!

If you get an email from someone once per month, you’re probably not going to remember the last email they sent you. It was simply too long ago, and you’ve received too many other emails in the meantime.

Sure, there’s an exception to every rule. For example, there’s an email I get once per month from the orphanage I volunteered with in Ghana. I still look forward to receiving it every month, and I read through the whole thing as soon as I receive it.

However, I’ve got a strong emotional connection to the organization, so I don’t open the email and wonder who the heck they are. That probably won’t be the case for someone who signed up for your list in exchange for a content upgrade.

What to do instead: Send out content weekly. Yes, weekly.

We want people to see the value in your content and remember who the heck you are! In order to do that, you need to be emailing them weekly.

Remember how many emails you get every day? Weekly really isn’t that often.

The only emails you’re sending are sales-y.

This error is especially common around the holidays, but I’ve seen people do it year-round.

Be honest: how many of your emails are sales pitches? If they’re anywhere close to 50%, you’re probably going to be seeing a lot of unsubscribes.

Sure, you’re going to be sending out more sales pitches during launch periods. And that’s fine! Just make sure it’s not like that all the time.

What to do instead: Give more than you take. Make sure you’re giving your subscribers awesome content more often than you’re asking them to do anything for you.

Because if you’re taking more than you’re giving, that’s not a beneficial relationship for your subscribers, so they’re going to leave you behind.

Content upgrades simply aren’t enough to grow your email list. Sure, you might gain a lot of subscribers, but if they don’t remember who you are or see the value in your content, they’re just going to unsubscribe right away.

Instead, make sure you’re offering up good shit weekly in order to keep all of those awesome new subscribers around!