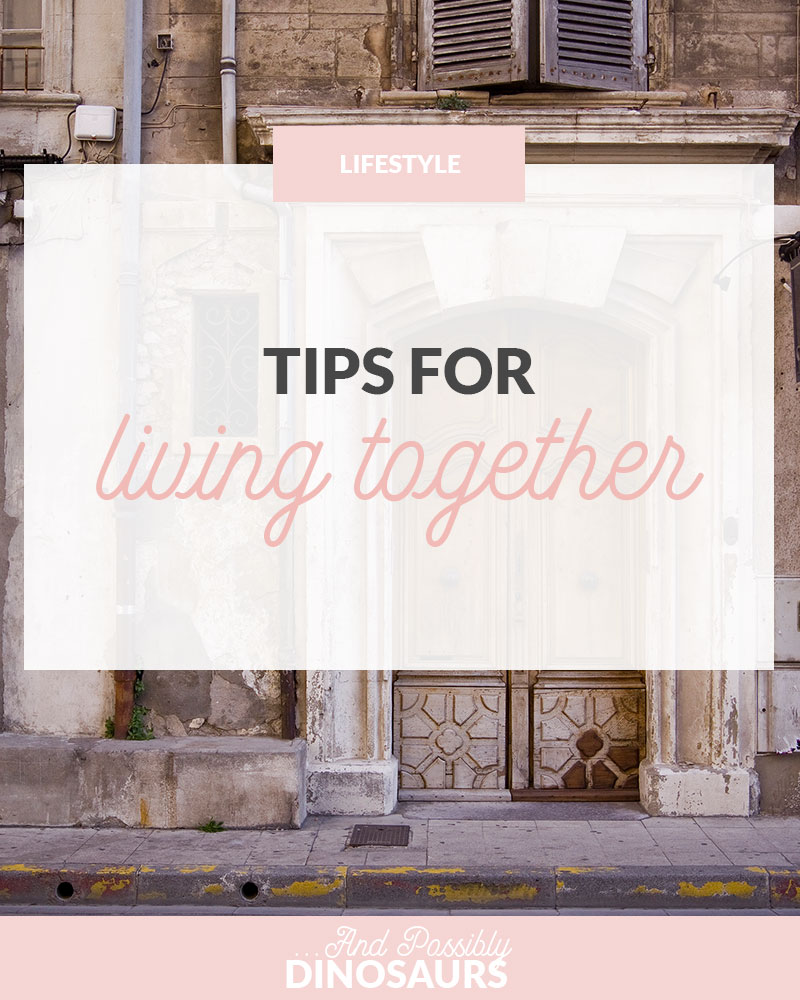 I’ve had some terrible roommates in the past. I’ll never forget coming back to school after winter break freshman year of college to find my crazy vegan roommate (nothing against vegans–that’s just what we called her) getting dreads put in her hair.

She also had to have her own refrigerator, which smelled like dying children because of all of the rotted fruits and veggies.

Mind you, I’ve also had some great roommates. Randi and I still get along really well, Lexie and I never bickered, and Sean, well… Sean and I are still dating, so that’s a good sign.

Whenever you’re moving in with someone, whether it’s a friend or a significant other, it’s imperative that you lay down some ground rules right off the bat.

Splitting up chores is a huge way to prevent arguments in the future. My previous roommate KC and I didn’t do this until a few months in. And when we did finally split them up, we got rid of a lot of awkward tension.

It doesn’t matter how you divide them up, but make sure you agree on it. You could pull a Graceland and have a chore wheel. KC and I rotated: dishes one week, trash the next. Sean does kitchen stuff, I do laundry room stuff.

This is especially important if you’ve got a pet. The cat box is in the laundry room, so it’s technically my territory. But I only really go in there when I do laundry, so I’m constantly forgetting. Sean (understandably) doesn’t want to do it, though, and he shouldn’t have to. So he reminds me when I forget.

Which brings me to my next point…

Hold Each Other Accountable

When you’ve got the chores divided, make sure you’re holding each other accountable. But at the same time, give each other some slack.

If I forget to do laundry one weekend, and Sean wakes up Monday morning with no clean work socks, I’m in big trouble. On the other hand, if I’ve gotten behind, but he’s got enough clothing to get through a day or two, he gives me a break.

Be Flexible with the Rules

Similarly, it’s important to be flexible with what works and what doesn’t. When KC and I were living together, we had a great system set up. But one night, she was doing the dishes and started the dishwasher at 11 p.m. I had been asleep, but the dishwasher was so loud it woke me up, and I had a hard time going back to sleep. I simply explained it in the morning, and we agreed we wouldn’t run the dishwasher after 10 p.m.

Just be nice about it! If something’s bothering you and you think of a better solution, bring it up. But don’t talk down to your roommate or act high and mighty about it. Be a person.

Lay It All Out on the Table

Not literally… unless none of you mind living in a pigsty.

Make sure you talk about anything and everything that could come up. If you share a bathroom, figure out schedules. Thinking of having guests come over? What’s your roommate policy on it? You don’t have to have a contract by any means, but find out how your roommate feels about different situations.

Know Who’s Paying for What

Do you have individual rent payments, or does one person pay the other? Are you getting groceries together and sharing everything? Know who’s accountable for what payments. And remember–some things shouldn’t be split. Furniture, for instance, should be kept separately, so when one of you moves out, there’s no question about whose it is.

Also, if you’re thinking about getting a pet, lay down the ground rules for payment. Who’s paying the security deposit? Who’s paying for the food? Knowing where you stand will be incredibly helpful and prevent future fights.

Since you’re living together, you might as well like each other! Hang out. Have a glass of wine at the end of the day. Do some crafts. Go to a movie. Be friends, in addition to roommates.

When all else fails, don’t be gross. Clean your hair out of the shower. Don’t leave your stuff laying out. Throw away your moldy food. It’s common courtesy, and your roommate will appreciate it immensely.

What rules do you live by when you live with someone? Let me know in the comments!