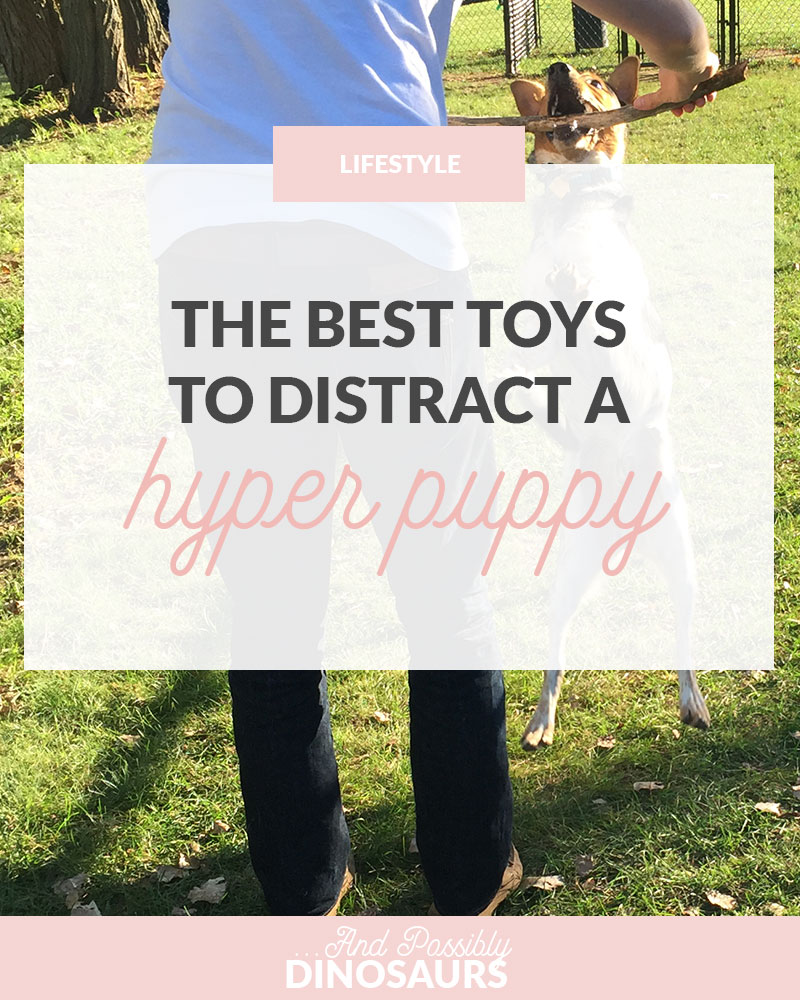 One of the first things I did when I moved out of my parents’ house post-college was adopt a pet. First I got a cat, but I knew I wanted a dog, too. So naturally, as soon as our apartment complex allowed dogs, Sean and I got a puppy.

Literally… we found out we could get a dog on December 24, and we came home with one on December 28. We would have gotten one sooner but, you know, the holidays and stuff.

Boy, were we in for a surprise. We ended up getting Stanley, an Australian Shepherd / Blue Heeler mix who’s a little bundle of energy constantly in need of our attention. We didn’t mind it too much at first, but eventually we needed a way to distract a hyper puppy when we wanted to watch TV or I wanted to work on my blog.

Thankfully, we found some.

During one of Stanley’s first vet visits, he was bouncing off the walls. The vet tech gave him a rawhide and BAM, it was like he was a completely different dog. He laid down and chewed on the rawhide while she took the information she needed.

At first, he went through one every 3-4 days, but he started eating them faster and faster, so we got him bigger and bigger rawhide bones. Now he goes through a giant rawhide bone in about 20 minutes, so we save them for those times when he’s really hyper and we really need him to calm down.

Similarly, Stanley loves his Nylabones. And luckily for us, he can’t doesn’t consume them, so they last a lot longer. Naturally, I got him the dinosaur ones. He doesn’t love them nearly as much as rawhide, for obvious (taste) reasons, but he still loves them.

Word of caution, though: depending on how pliable the plastic is, they could turn into daggers. I recommend wearing long pants and long sleeves if your puppy wants to cuddle while chewing on it.

For a while, Stanley hated the Kong. He just didn’t get it. We tried everything: peanut butter, frozen broth, kibble. Nothing worked. Luckily, he eventually figured it out and has grown to love it. We simply fill it with peanut butter and some kibble and he goes to town!

A few warnings, though: When he gets near the end, he makes some gross noises, so headphones are in order. Also, it’s not uncommon for us to find peanut butter on the door or the ceiling. Yes, the ceiling. And when filling it up with peanut butter, don’t double-dip the spoon. Please.

One of my good friends Lexie spoiled me and Sean Stanley for my birthday this year. In addition to my gift, she got Stanley a little ball that he loves. We put his treats into it and he has to push it around the room to get the treats out. It was one of the first types of toys the vet recommended, because Stanley is a herding dog. This means he needs to have a job to do. As the vet said, if you don’t give him one, he’ll find one himself. And you probably won’t like the job he finds.

This model has two layers between the treats and the dog, so he has to work really hard at it. It’s a little noisy, depending on the treats you buy, but it’s not nearly as bad as the Kong-slurping noise.

Okay, so this one doesn’t technically distract a hyper puppy, because you have to play with them rather than leaving them to it. But we’ve found that Stanley gets so tired from running after the laser pointer that he just goes to sleep. It’s magical..

We just run him back and forth in our apartment or the dog park, and he gets super tired. When we put the laser pointer away, he gets upset at first, but after a few minutes he’s conked out on the couch. #worthit.

What do you use to distract your hyper puppy? Let me know in the comments!