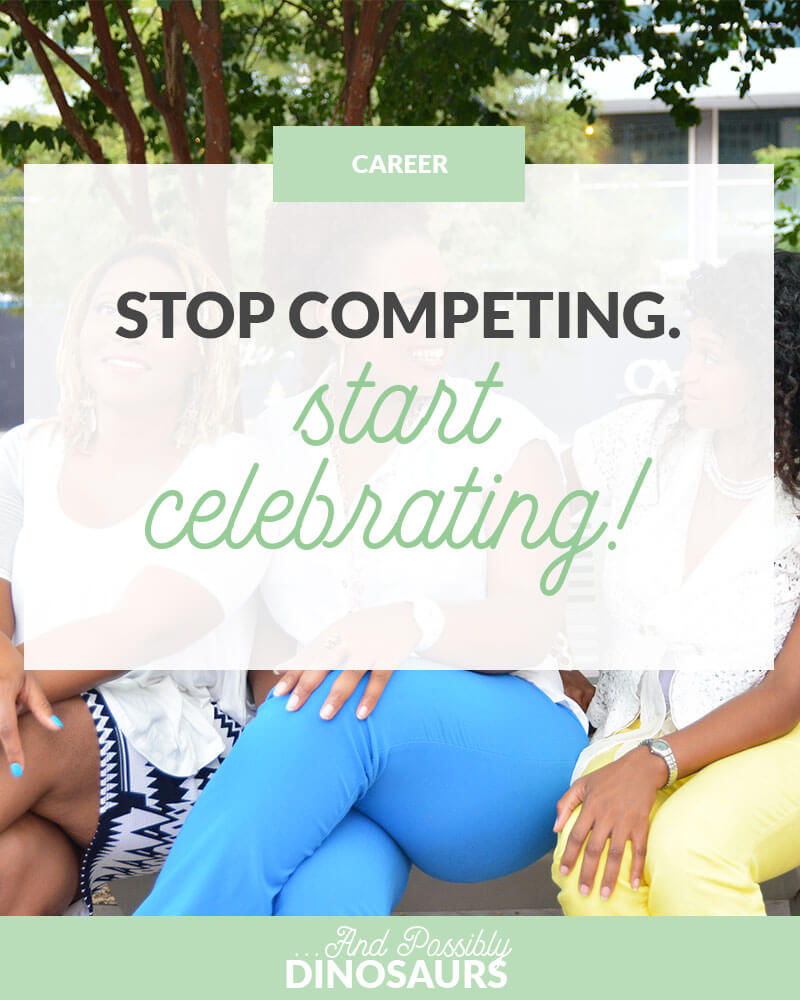 Women tend to get screwed over a lot. The wage gap, rape culture, and sexual stereotypes put us at a disadvantage against our male counterparts. And that’s not even bringing race into the argument. And while it may take a long time to fix these problems and prevent the unfair disadvantages from occurring, we can make immediate process be changing the way we react to these disadvantages.

Growing up, I believed women were inherently catty. That it was easier to be friends with guys because there would be less drama. Well, the reason for this cattiness and drama is that we think we need to compete with each other to get by. If it’s so hard for a woman to be recognized for her work, then there’s no way two women would be recognized, right? So the obvious solution is to drag down the other women while you’re scrambling for the top.

But here’s the thing: that’s not the solution at all. (Shocker, right?)

As women, we know that we’re perfectly capable of doing most (if not all) of the jobs men do. So why are we perpetuating the stereotype by bringing other women down? It’s time we start supporting our gender so these negative stereotypes can be brought to an end.

But if we were celebrating each other’s accomplishments and lifting each other up, that’s half the population saying “you go girl! you’re a woman and you totally can do that!”

That’s a big difference, am I right? Let’s look at a few ways we can shift our mindset in different parts of our lives.

Let’s start this one off with a little back story, shall we?

Why? We were so competitive. We always liked the same guy, wanted to play the same position in the same sport, etc. So we got in fights all the time.

One summer, we were at summer camp together and were hanging out with our brother cabin. Can you see where this is going?

We were hanging around the camp fire, and slowly everyone split off from the group conversation into mini-discussions. Kenzie and I started chatting with this guy named Victor for quite a while.

By the end of the week, we got his AIM screenname (god, I feel old) and continued chatting with him. Turns out, both of us liked him. And both of us wanted to date him. (Despite the fact that he lived like three hours away and we were in middle school and would never see him again.)

Looking back on it, I can’t help ask myself if I actually liked Victor, or if I just liked the idea of a boyfriend. (spoiler: it’s the latter.) Or maybe I just didn’t like the thought of my best friend dating someone when I wasn’t.

I’m sure this wasn’t the first time this we-like-the-same-guy fight happened, and I can say for sure it wasn’t the last. But once we grew up, we found our own taste in guys and are happily in relationships with two different guys.

(The funny thing is, when the four of us were hanging out before Sean and I moved to Kentucky, I totally saw Sean in Kenzie’s boyfriend. It was weird.)

And while some competition in the workplaces is healthy, it’s important to know where to draw the line.

One important thing to consider: what’s your mindset? Are you competing with a coworker because you know it will motivate you to better yourself and your career? Or are you competing just with female coworkers because you notice that upper management is mostly male and therefore have a hard time seeing more than one woman advance?

If it’s the latter, then I have some advice for you: find a new job. That’s not the type of place you want to work.

But friendly competition is good. It’s a really good motivator to not only do better for the company, but also advance your career. Just make sure you’re both in on the competition and have no hard feelings about it.

And despite the friendly competition you may have, make sure you’re celebrating everyone. If someone gets promoted? How awesome for them! Whether or not it’s a promotion you wanted, try to think about it from their perspective. If you just got a promotion, wouldn’t you want people to be happy for you?

This one is really hard to shake. As a blogger, it seems naturally to compete with basically every other blog in your niche. I always find myself comparing And Possibly Dinosaurs to a ton of other blogs I love, like XOSarah and The Nectar Collective. But you can’t do that to yourself. It’s just not fair.

After all, Sarah and Melyssa are real people. They’ve worked their asses off to build a brand and business for themselves, which is something to be celebrated.

Sure, I use them as inspiration and aspire to be like them some day. But I don’t want to compete with them. It’s not healthy.

So remember: comparison is the thief of joy. And competition and comparison are bffs.

This one is tricky. Competition is an inherent value of sports, so why would you want to take that out of it? Don’t worry, that’s not what I’m saying.

I love me some friendly sports competition. But remember: the people who play sports are real people, too.

Take, for example, the NWHL. It’s the inaugural season of the National Women’s Hockey League, which I was celebrating hardcore. Women are finally being paid to play hockey!

Then I had to choose a team to root for. There are only four teams so far: the Buffalo Beauts, the Boston Pride, the Connecticut Whale, and the New York Riveters. I chose the Riveters, for obvious reasons. 💪 (Wearing my Riveters sweatshirt now, in fact!) I couldn’t choose the Boston Pride because I have a genuine hatred for Boston teams. I can’t really explain it; I just don’t like them. (Sorry to any readers from Boston! Nothing personal.) So, I have fun cheering against them.

But then the Women’s Winter Classic happened. On December 31, 2015, the Boston Pride played the Montreal Canadiennes (of the Canadian Women’s Hockey League) played in an outdoor game at Gillette Stadium. During the game, 24-year-old Denna Laing of the Boston Pride fell into the boards and suffered a severe spinal cord injury. She has limited movement in her arms and no feeling in her legs.

As I said, I love hating on Boston. But no one wants to see someone get hurt. Competition is part of the game, but there’s more to life (and the players’ lives) than competition.

So there you have it. Competition is good in moderation, but don’t forget to celebrate each other.

What are you doing to celebrate the women around you? Let me know in the comments!