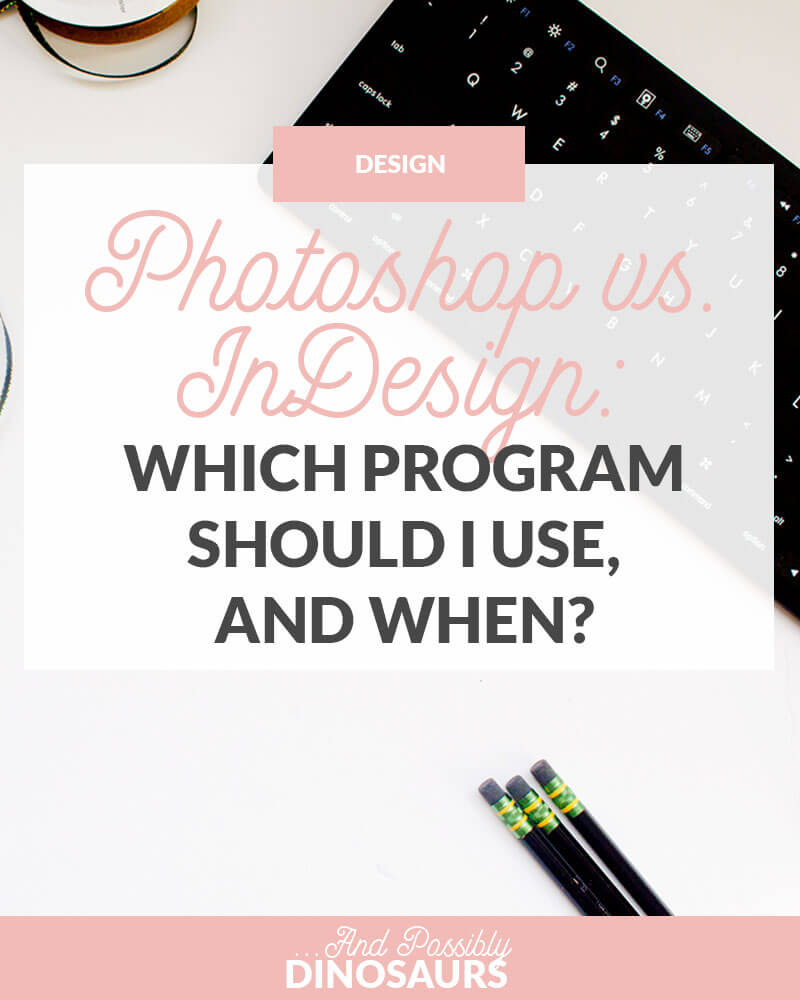 It’s no secret that I absolutely love Adobe’s products. But I’ve always had a Photoshop vs. InDesign rivalry going on in my head.

I’m super comfortable with both programs, but I keep going back and forth on which program I should use for certain projects. Some days, Photoshop makes more sense. Others, InDesign does.

So, I’ve made a comprehensive Photoshop vs. InDesign Guide on which program you should use, and when.creaa

As the name implies, Photoshop is great when photos are involved. Here are some of my favorite projects to do in Photoshop.

So obviously we’re going to talk about photos first. Photoshop works great for editing headshots. I’m not talking editing out all of your blemishes and making your skin look plastic; I’m talking cropping the photos to the appropriate dimensions, making sure the resolution is correct, etc.

Mind you, I did technically edit the headshot I use for my blog (the one with the yellow background on the top of my sidebar). The yellow wasn’t quite right, so I used Photoshop’s Replace Color tool( Edit -> Appearance -> Replace Color) and replaced the existing yellow with my brand’s yellow.

Another great use of Photoshop is editing stock photography that you take for your blog. Because let’s be honest, no photo ever really turns out exactly how you want it. Say you’re trying to take a photo of some white paper on a white background. Your camera is likely going to try to make all of that white a medium grey, so you’re going to need to change your settings on your DSLR and edit it in Photoshop.

It’s also great for editing out distracting elements like cat hair or dust. (You’d be astonished at how many times I’ve had to Photoshop cat hair out of my blog photos. Thanks, Val.)

Plus, depending on the image, you can change the background color, just like I did with my headshot’s yellow background. Say I want to create a flat lay image with a pink background, but I don’t have the exact right pink. I take the photo with a similar shade background and replace the color!

This is the #1 blog project I complete in Photoshop. Every single blog post I write has its own header image, and each one is created in Photoshop. I’ve even created a template so I simply have to open the document and hit Save As, so my images always have the same fonts, same colors, and same logo placement.

If you’re interested in doing this for yourself, check out the full blog post header template tutorial here.

Similarly, I’ve got a matching template for my social media sharing images. I use the same image for Facebook and Twitter, and I’ve created a Pinterest-friendly image in the blog post itself, so I really only have two. But in the past, I’ve also created square templates for Facebook and Instagram that featured different inspirational quotes, so there’s really a lot you can do with it.

If you want to create your own social media image templates, check out this tutorial!

If you’re selling e-products like ebooks or printables, product mock-up images in Photoshop are super helpful. I simply find whatever mock-up template I need on Creative Market and voila, my product appears to be real.

For example, I was creating some travel posters to sell on Etsy. I didn’t want to have to print them out and ship them, so I made them available for Digital Download. But I knew I needed to have an attractive product image, so I got this Clean White Frame Mockup for $7 and was able to download a Photoshop document (PSD) that I could paste my artwork into.

Here’s the poster I was selling: 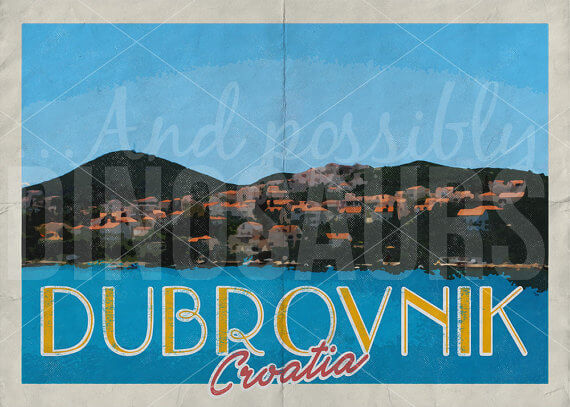 And here’s the poster in the Clean White Frame Mockup, so I could show customers what my poster would look like if they printed it out and framed it: 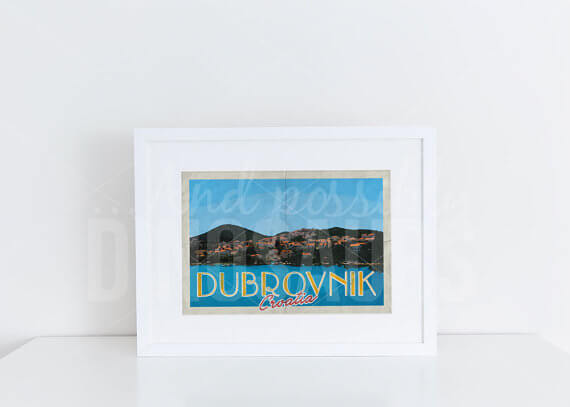 You can find a ton of different mockup images on sites like Creative Market. For example, I know a lot of people get iPad mockup images for their ebook sales pages. You can even get mockups of physical books!

Not sure if you should use Photoshop or InDesign? @caitlinhonard can help!Click To Tweet

InDesign, on the other hand, is better used for graphic design projects. Here are some examples.

Woah now, Cheevers. You’re repeating yourself. Make up your mind.

What you’re going to need to decide is whether or not your blog post header image is going to have photos or not. This helps you choose your winner in the Photoshop vs. InDesign debate. Mine, for example, does, so I use Photoshop. A more graphics-based header image, though, would be better in InDesign.

Basically, see above. If there are images, use Photoshop. If it’s just shapes and text, use InDesign.

Ah, ebooks. The ultimate project to create in InDesign. Ebooks are the perfect example of when to use InDesign, because there’s so much you can do with it. You can wrap text around objects, link text boxes so all of your text flows from one page to another, and link your table of contents page(s) so they automatically jump to the corresponding chapter.

Trying to create an ebook in Photoshop is just… not going to work. The textboxes don’t have as much functionality as they do in InDesign, and you can’t have a multi-page document in Photoshop like you can in InDesign. 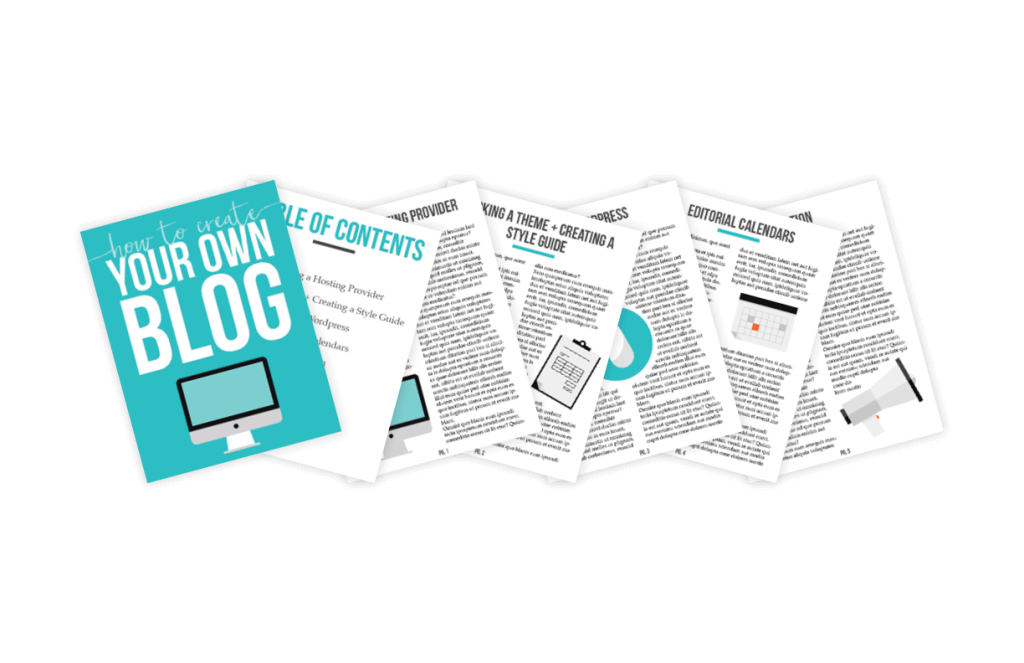 I know plenty of people create worksheets in Photoshop, but I think they’re making a mistake. InDesign is so much easier to create a worksheet in, and it adds a whole new level of functionality to your worksheets: interactive elements.

With InDesign, you can create worksheets that your audience can write in and check off right from their computer. No more having to print out a worksheet to fill it out; just type in the box and save. It’s really amazing, and adds a whole new customer service level to your worksheets.

On a similar note, workbooks are a great project to tackle in InDesign. You can create multiple forms, on multiple pages, and create links to other pages or to external websites. Imagine if you wanted to have a Click to Tweet link on the last page of a workbook. You can’t do that in Photoshop. You can in InDesign.

As a Type-A person, my love for checklists is probably disturbing. I’m very goal-motivated, and I love checking things off a to do list. But who wants to have to print out a checklist just to get the satisfying feeling of crossing something off? As someone with a tiny desktop printer with crazy-expensive ink, I’d rather not.

With InDesign, you can create checkboxes that you can check off right from your computer. The possibilities really are endless.

One of my InDesign files that I access the most is my And Possibly Dinosaurs Style Guide. I created a vector-based guide that has all of my fonts, colors, logos, etc. in one place. Whenever I need something, I simply open up the InDesign file and copy whatever element I need and paste it wherever I need it.

In Photoshop, everything is raster-based. So, I could have my And Possibly Dinosaurs logo in there, but if I needed to blow it up from 500px wide to 2400px wide, I wouldn’t be able to. Well, I could, but it wouldn’t look good at all. With InDesign, I can create it as a vector image, which means I can blow it up as large as I need it and I won’t be sacrificing quality. Yes, please.

Similarly, mood boards are awesome in InDesign. You can create boxes in whatever shape you want and place photos and illustrations into them. So, create a board on Pinterest with all of the graphics you love, and import them into an InDesign file to make them pretty.

I don’t create my resume in any program except for InDesign. It’s seriously the best. If you’ve tried to create a resume in Word, you know the struggle of trying to line everything up based on font size, trying to figure out where the tables are, etc. It’s just a pain in the ass.

Plus, I love being able to add links. I’ve got my blog on my resume, and I’ll make “And Possibly Dinosaurs” a link to my homepage, so the person looking at my resume can easily click over and see what the heck And Possibly Dinosaurs is. I also link to my online portfolio, my social media accounts, and anything else on there that can be referenced online. Going the extra mile say what?

Similarly, media kits are super easy to create in InDesign. Think about them like your blog’s resume, and the company you’re reaching out to is the hiring manager. I include the logos of brands that I’ve worked with, and each logo is a link to the corresponding sponsored post. Same with my top posts: rather than including a URL they need to copy and paste, InDesign lets you turn the text into a hyperlink. It’s super awesome and makes you look hella professional. You can’t get those links in Photoshop.

Just do the same to create a pattern. Create whatever image you want repeating as a vector, and then copy and paste it in a pattern. Boom! Thanks, InDesign.

And finally, we’ve got business cards. Super important for anyone trying to start their own business. Being vector-based, InDesign allows you to make your logo as small as you need to fit on a business card while still being super sharp. Plus, many printing companies use InDesign already so you can send them the native InDesign file to avoid losing color quality.

So, which program wins in the Photoshop vs. InDesign battle? If you were counting the number of projects you could do, then I’d say InDesign. But it’s all up to you. Which types of projects are you creating the most? I personally use InDesign all the time, but I use Photoshop a lot too.