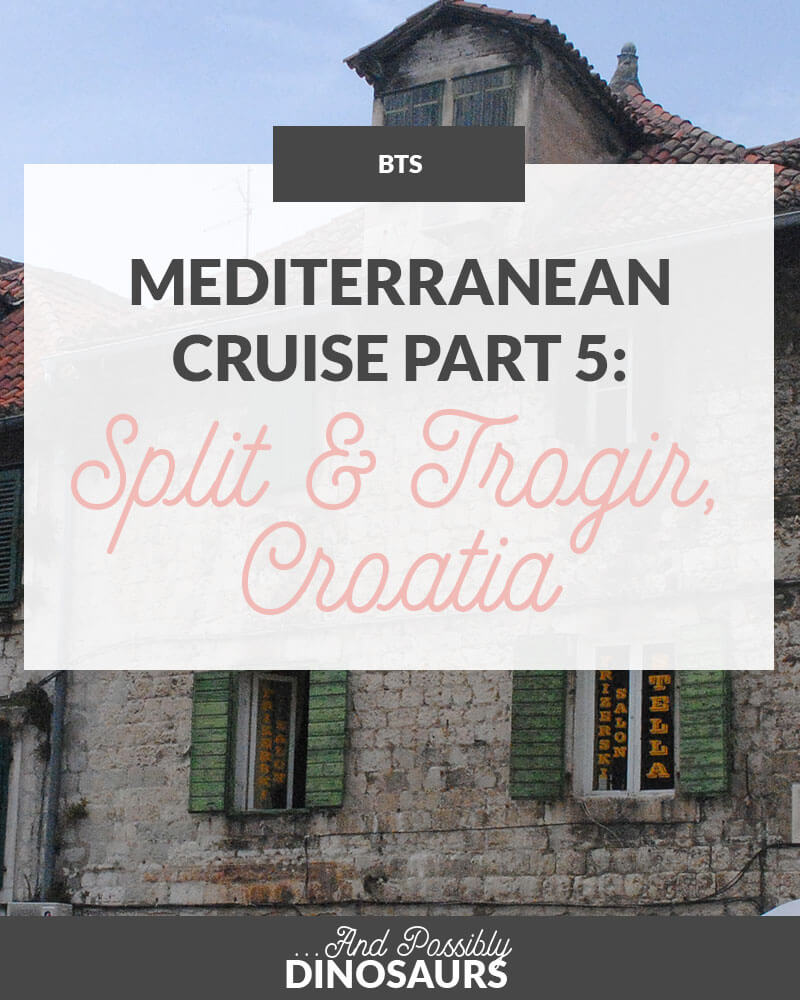 Our fifth and final port brought us back to Croatia.

Our excursion took us not only to the second-largest city in the country, Split, but also to the old medieval town of Trogir.

We hopped on the tour bus and made our way to Trogir. The scenery was breathtaking on the way; we saw beaches, towns, and mountains seemingly on top of one another. The mountain range was dotted with bright yellow flowers and fields of lavender.

When we got into Trogir, we walked through the medieval town and saw a cathedral, shops, and even a Dalmatian folk music group. (No, it wasn’t a group of singing spotted dogs. Split is located in Dalmatia.) 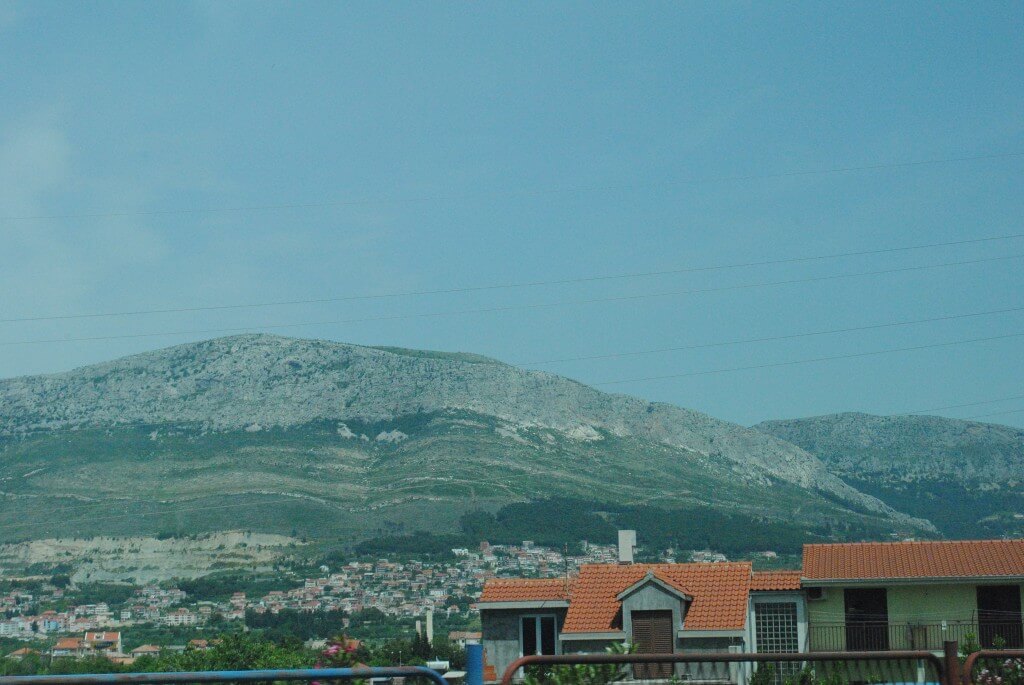 Most Croatian coastal cities aren’t able to expand for one large reason: mountains. With the ocean on one side and mountains on the other, there isn’t much room to expand. In this photo, you can also see lavender growing in the field to the left of the forest. 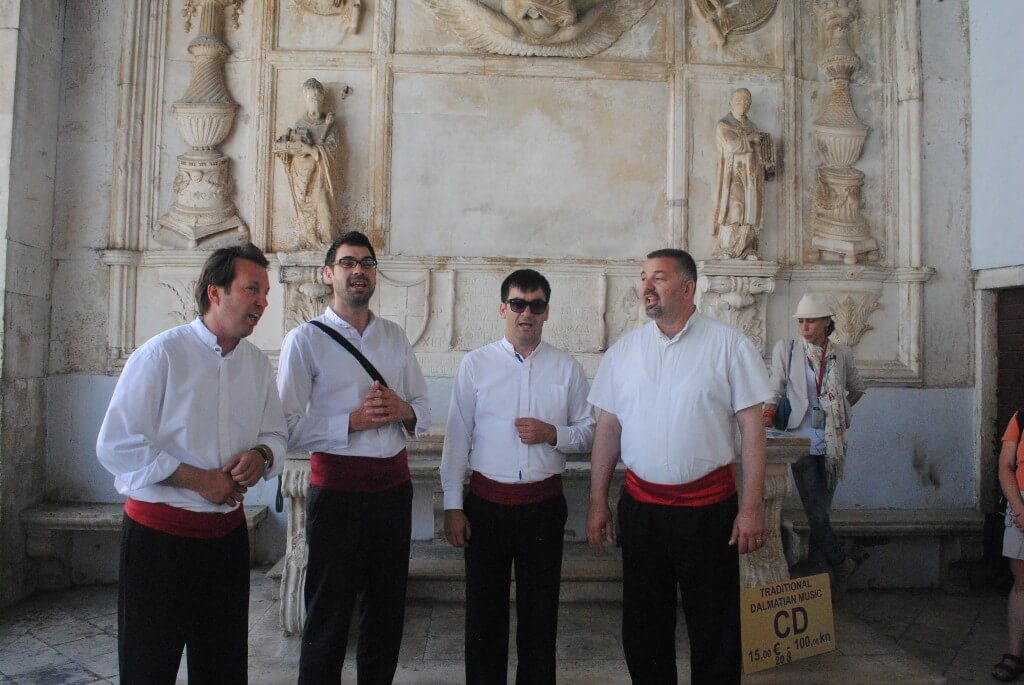 We were able to hear some traditional Dalmatian folk music, which was really cool.

The city of Trogir has been rebuilt on top of itself several times. It’s been overtaken by many different groups throughout history—including Greeks, Romans, and Venetians—and each group wanted to customize the city in its own way. They really didn’t care to preserve anything from the previous civilization; they used what was useful and built over what wasn’t. Back then, nostalgia didn’t run as rampant as it does today. The age of things didn’t add value, so just because it was old doesn’t mean it was saved. (That being said, gold and gems were always looted, no matter their age.)

The entrance to the Cathedral of St. Lawrence was absolutely stunning. Stone carvings surrounded the entire entrance, showcasing Adam and Eve, the 12 months (explained in chores and hobbies that are done in each month, like sheep shearing), and the life of Jesus. They are still in beautiful condition, despite being 800 years old.

Part of the right-hand column of the entrance shows a man shearing sheep. 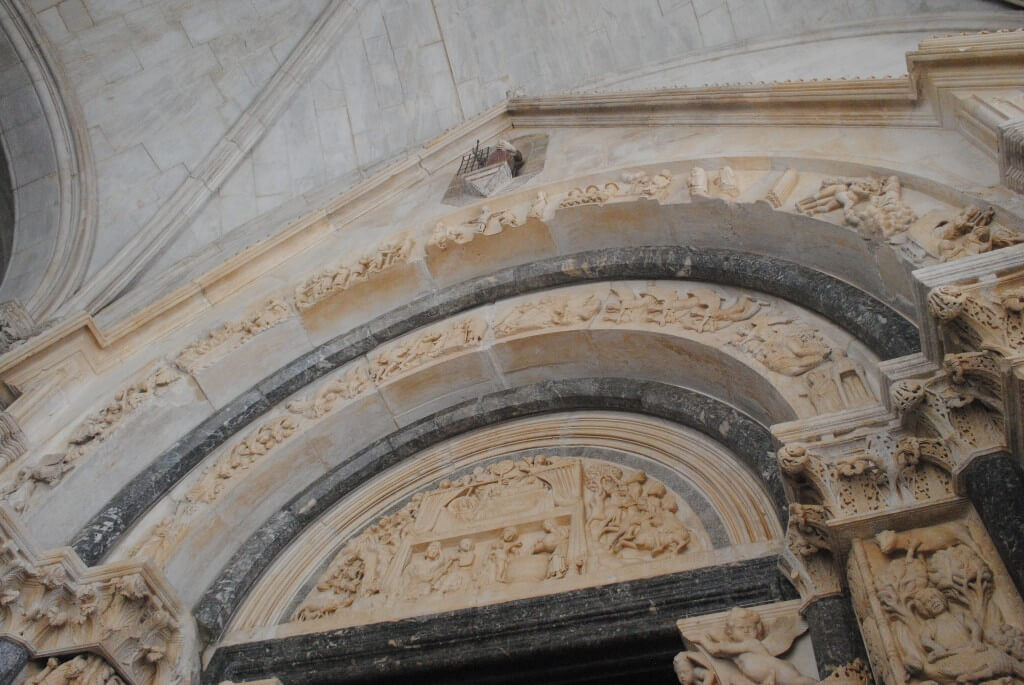 The lunette above the entrance shows the scene of the nativity. 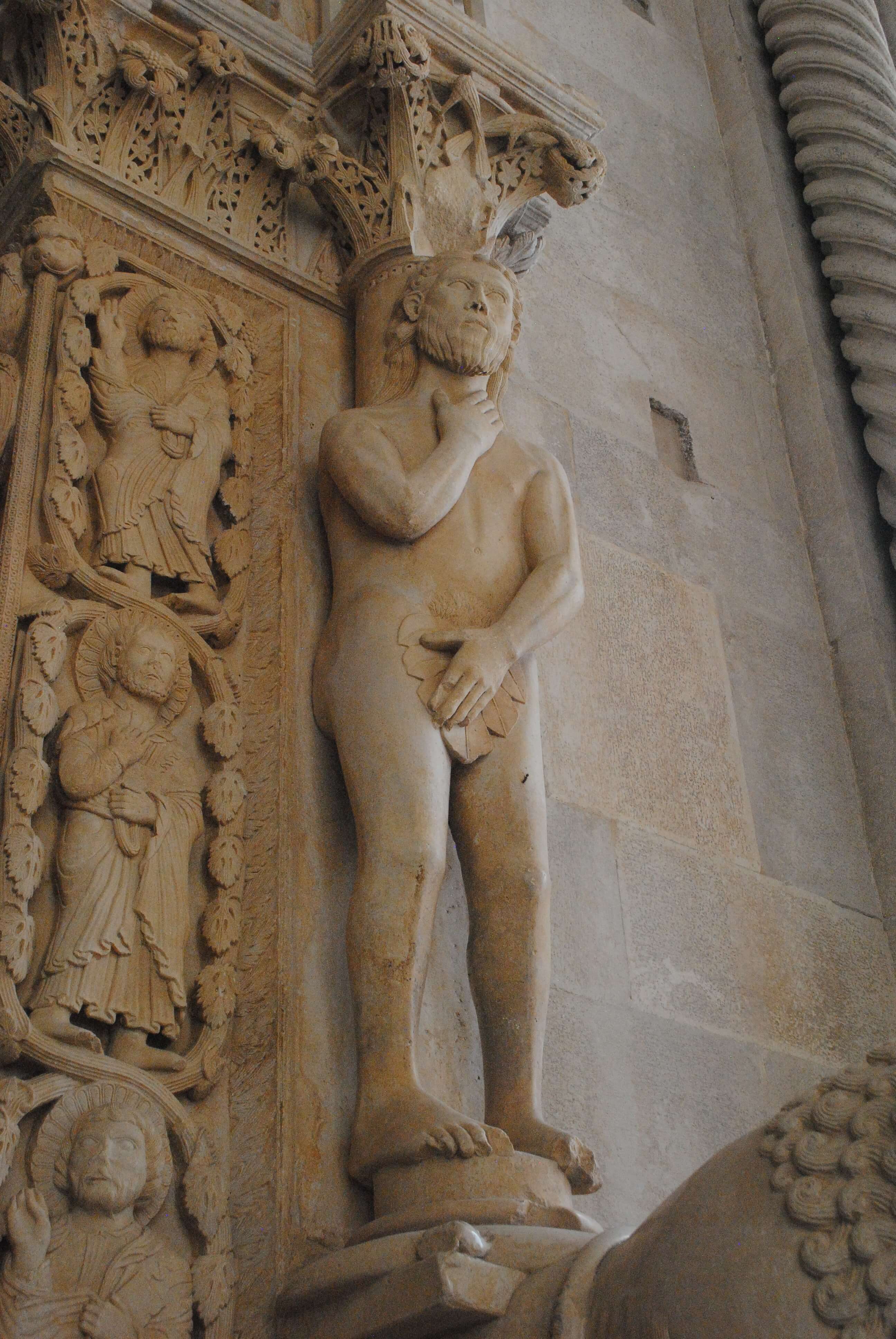 The statues of Adam and Eve (who was located on the opposite side of the entrance) were revolutionary when they were first installed, because it was one of the first times the couple was shown in the nude.

The inside of the cathedral was just as beautiful. There was a chapel inside adorned with more stone carvings, including one of my favorites: God peeking in on his creation.

Once we finished the Trogir part of the excursion, we had some free time to walk around. I found some french fries and Sean got some Croatian beer and gelato; we were on vacation, so we didn’t feel like we had to be healthy.

After we got some food, we basically just wandered through the town (which is starting to become our MO…). I found some Croatian lavender for myself and a clicker pen for my mom (she loves clicker pens), but other than that we just ducked into and out of shops and explored.

Once we got to Split, we explored Diocletian’s Palace.

As you may or may not know, Diocletian was a Roman emperor in the third and fourth centuries, and he was an all-around mean person. Back in those days, the main way to become emperor was to kill the current emperor (which he did), so after 20 years he decided to go the retirement route rather than the murder route.

Which naturally meant “in a span of 10 years using thousands of Christian slaves, build a giant palace for myself and a ton of soldiers who will protect me.” Nice guy, right?

We walked into the basement of the palace, which was cluttered with booths where shopkeepers sold jewelry and souvenirs. Back when the palace was being built, they basically used the basement as a trial run. They wanted to get the layout right before bringing out the big guns, so to speak. Once the palace itself was built, it was most likely only used for food storage.

As we’re standing in the basement with the palace towering over our heads, our tour guide tells us that, until a few decades ago, the basement was full of petrified shit. Literally.

Turns out after the palace had been abandoned, various groups settled in it and dug holes into the basement to use for trash and toilets.

They’ve been able to dig through most of the 40-some rooms, and so far have only found one noteworthy thing: Diocletian’s dining room table. It’s actually pretty cool. Another fun fact: Diocletian and his cronies may be some of the first people to partake in bulimia. They would gorge themselves on food at this dining room table, excuse themselves to the bathroom, puke, and then gorge some more. How very Hunger Games of them.

When we got upstairs, we saw the mausoleum where Diocletian’s body used to be. Turns out some  Christians were pretty pissed about his less-than-friendly relationship with the religion, so they broke into his mausoleum, stole the body, and turned it into a cathedral.

His body’s whereabouts are unknown. He could have been smashed into dust that has since floated around the world, or he could be at the bottom of the Mediterranean.

The architecture around the square was beautiful: Egyptian stone pillars held up beautiful arches, under which sat a 3,500-year-old sphinx. 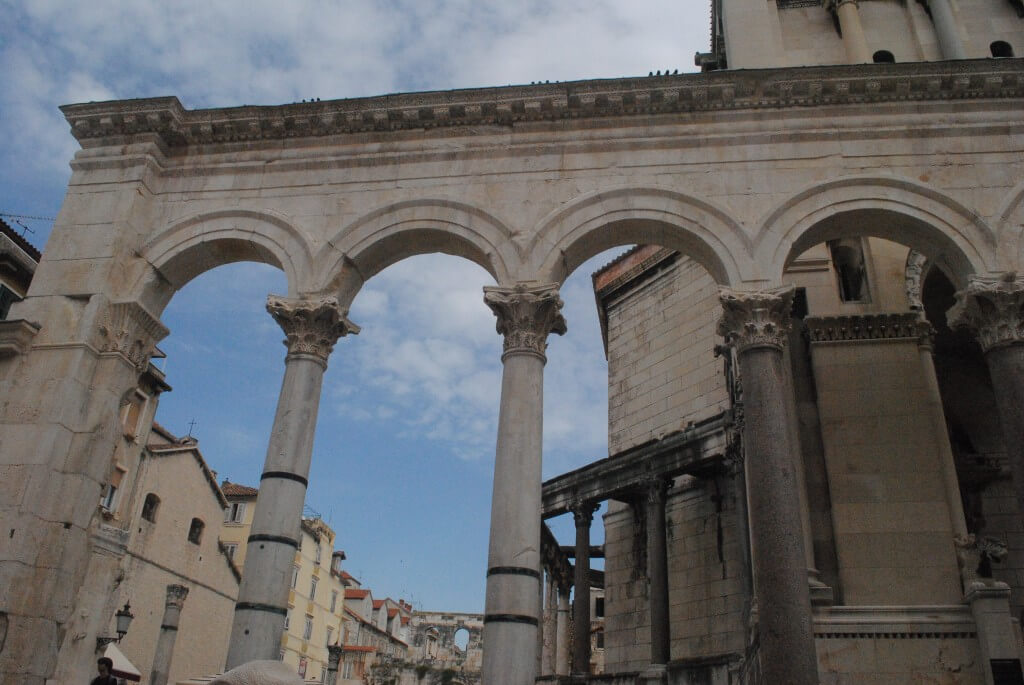 The red pillars are Egyptian stone, and the octagonal building behind them is the mausoleum-turned-cathedral. 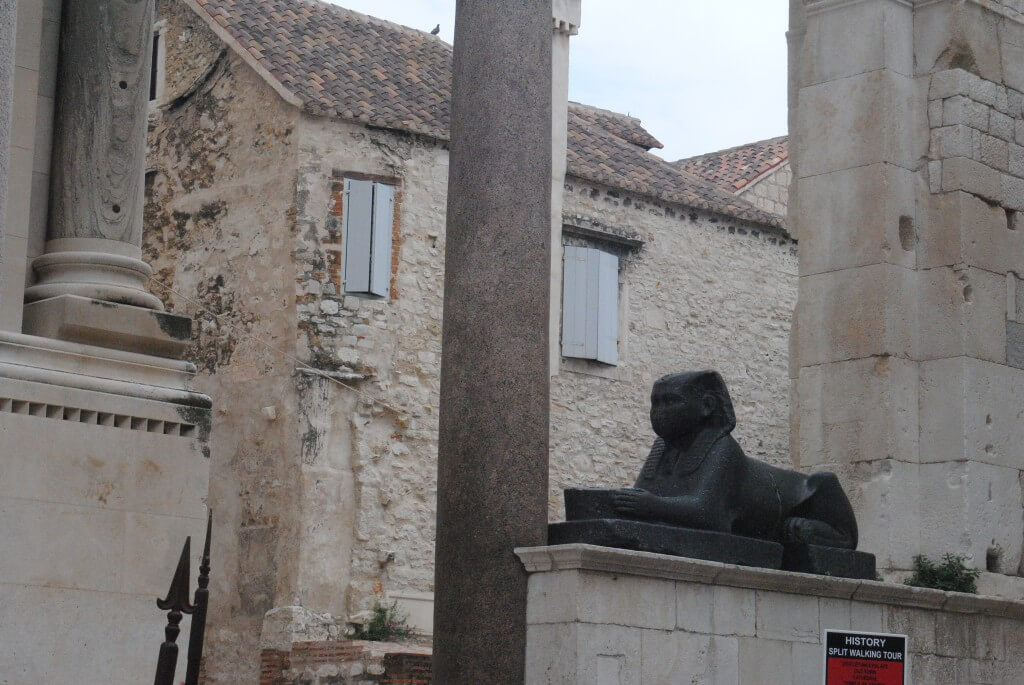 As we continued walking through the palace, I felt like we were traveling from the past abruptly to the present; the tour guide pointed out more Egyptian stone pillars that now stood in the middle of a functioning bank, and clean laundry hung from lines between apartments.

The palace has evolved throughout history, becoming whatever the city of Split has needed it to be.

Once the tour was over, we did some more sightseeing (read: wandering) on our own before heading back to the cruise ship. That night we packed our bags, and the next morning we were homeward bound!