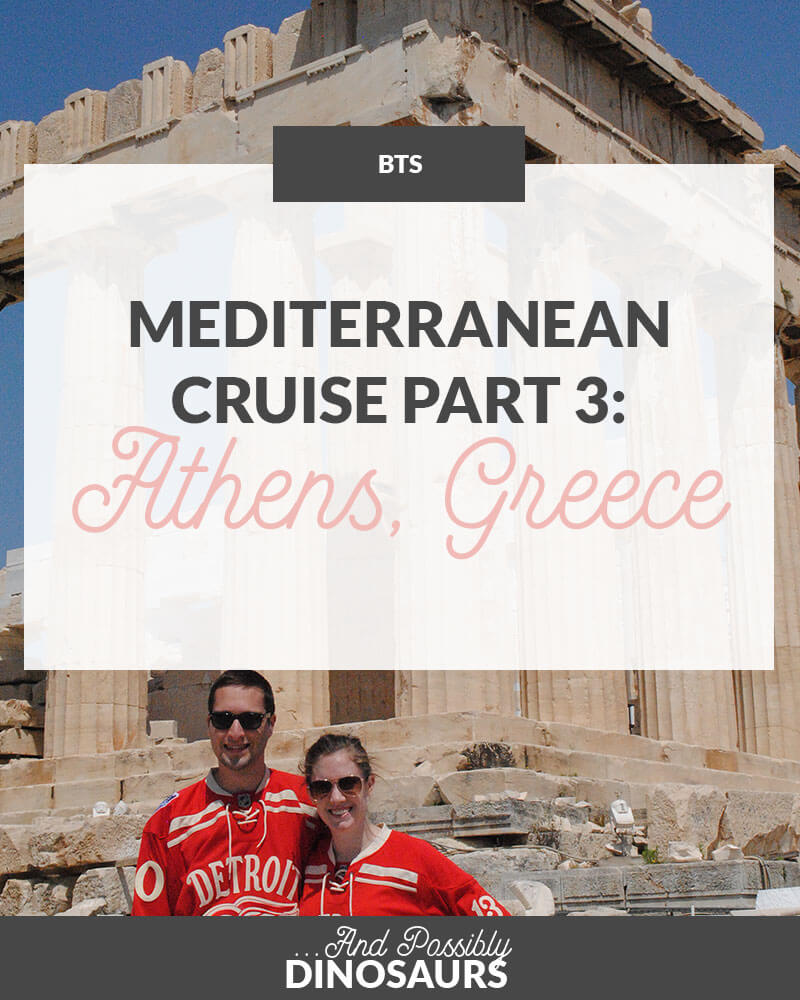 After a cold, cloudy, and mostly uneventful day at sea, we arrived in sunny, sweltering Athens, Greece. This was by far the most disappointing port.

Let me preface this post by saying I’m really glad we went to Athens. It was really cool to see such ancient architecture and history. That being said, I would never go back.

We took an excursion called Acropolis and Leisure and had the misfortune of an awful tour guide. (This might be the reason Athens was so lousy for me, but I can’t say for sure.)

My disappointment started with the drive from the port to the Acropolis (from the Greek words for “hill” and “city”). The city is just ugly. I expected more. There were crappy plastic awnings on most of the buildings and vinyl ads hung from almost all of the balconies. I was expecting the grandiose city it was in the past, something beautiful like Santorini.

That’s definitely not what we saw.

We got to the top of the Acropolis, and…. 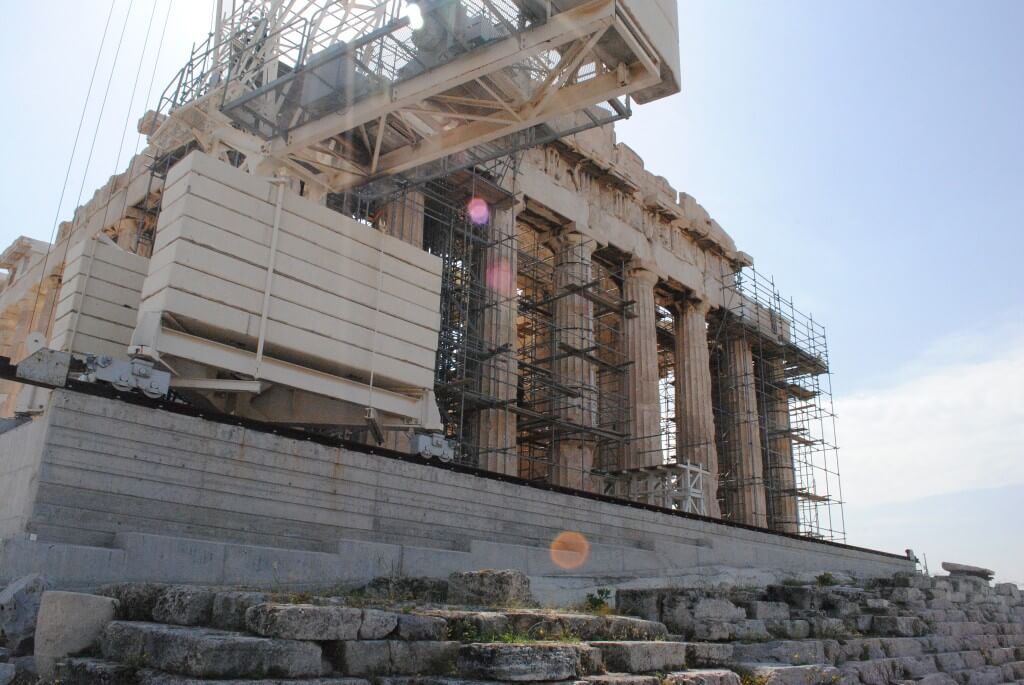 It was just plain underwhelming. I didn’t even realize I was looking at the Parthenon until the tour guide (in monotone broken English) said so, because the side facing us was covered almost entirely with scaffolding.

In addition, the above picture was one of the few I was able to take without a single person in it. We went in the offseason and there were still hundreds of people crammed onto the top of the hill.

It was also incredibly warm, and we were there in the spring. Make sure you pack warm-weather clothes if you visit.

The ground was covered in worn-down (read: slippery) marble, made walking risky at best. I’m pretty sure you couldn’t get to the top of the Acropolis without breaking your face open if it were raining.

However, we still got to see cool sights like the Temple of Athena and the non-scaffolded side of the Parthenon. 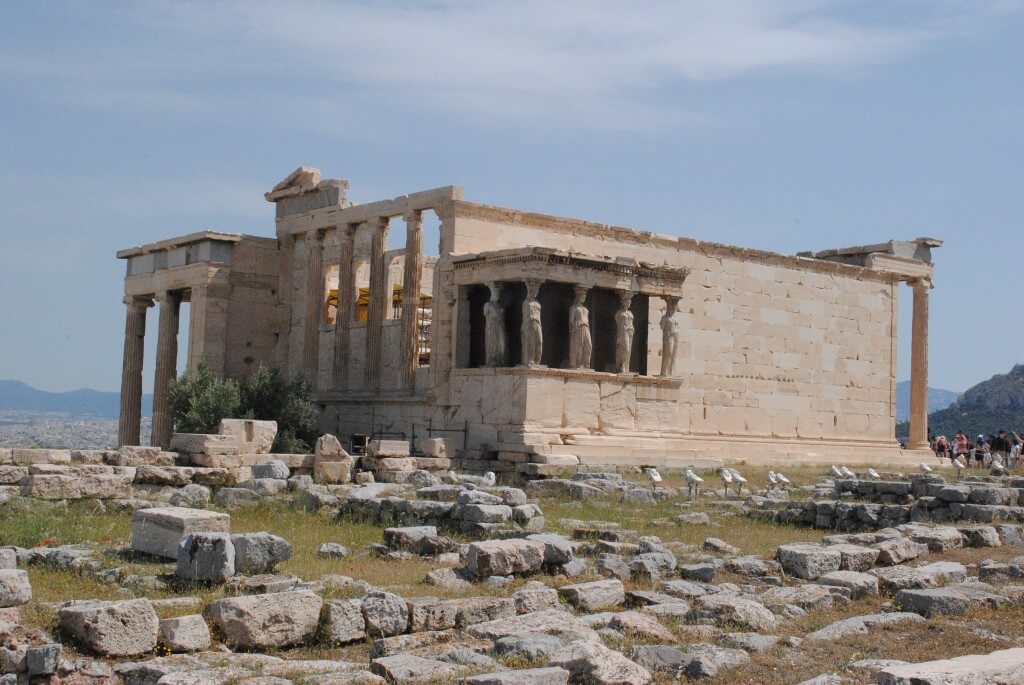 The Temple of Athena 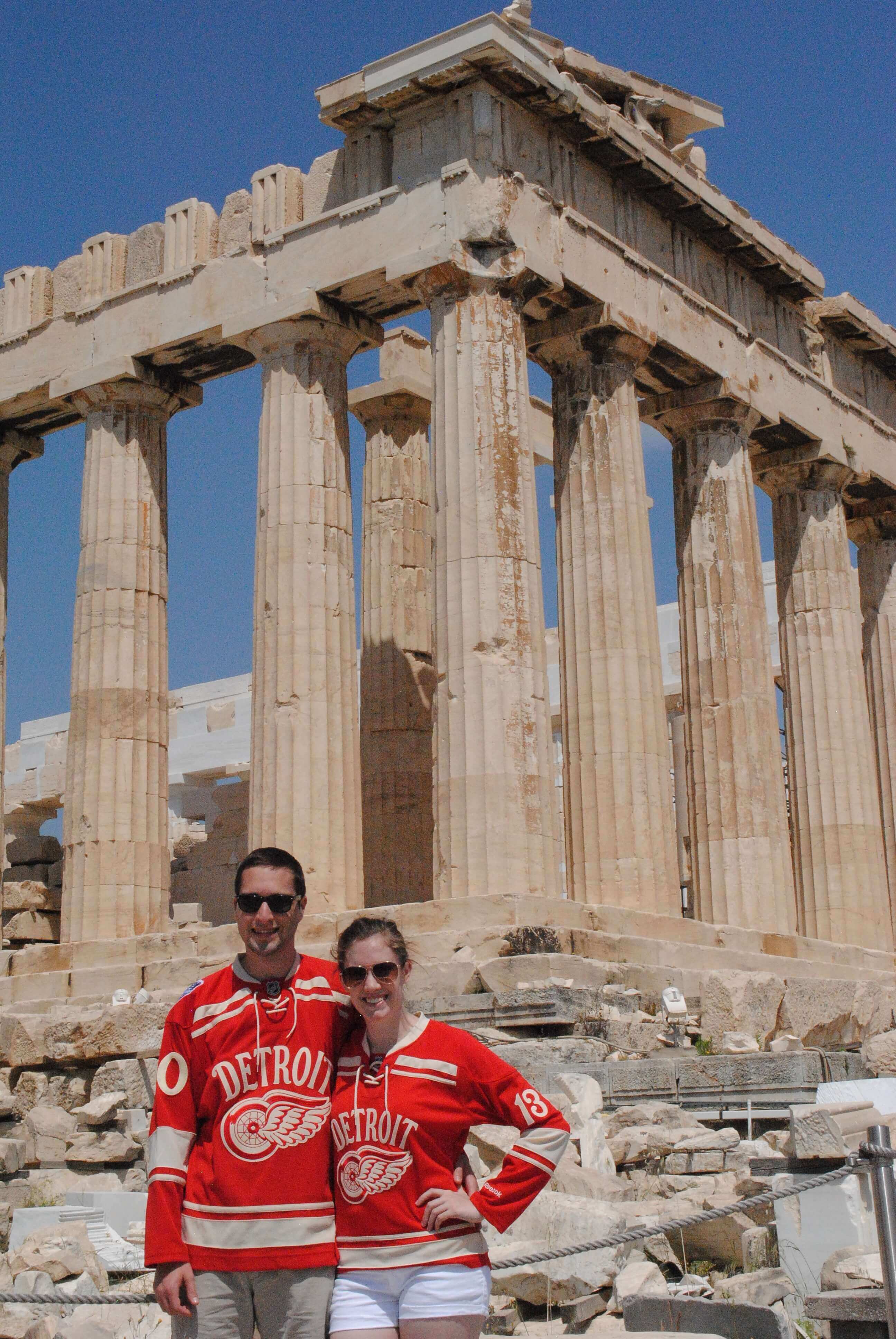 The Non-Scaffolding Side of the Parthenon!
Yes, we will be submitting this photo for Red Wings Fan of the Day.

We also got to see the few remaining columns from the Temple of Zeus (you know, the giant talking statue from Disney’s Hercules), both from afar and close up when we drove to our next location. 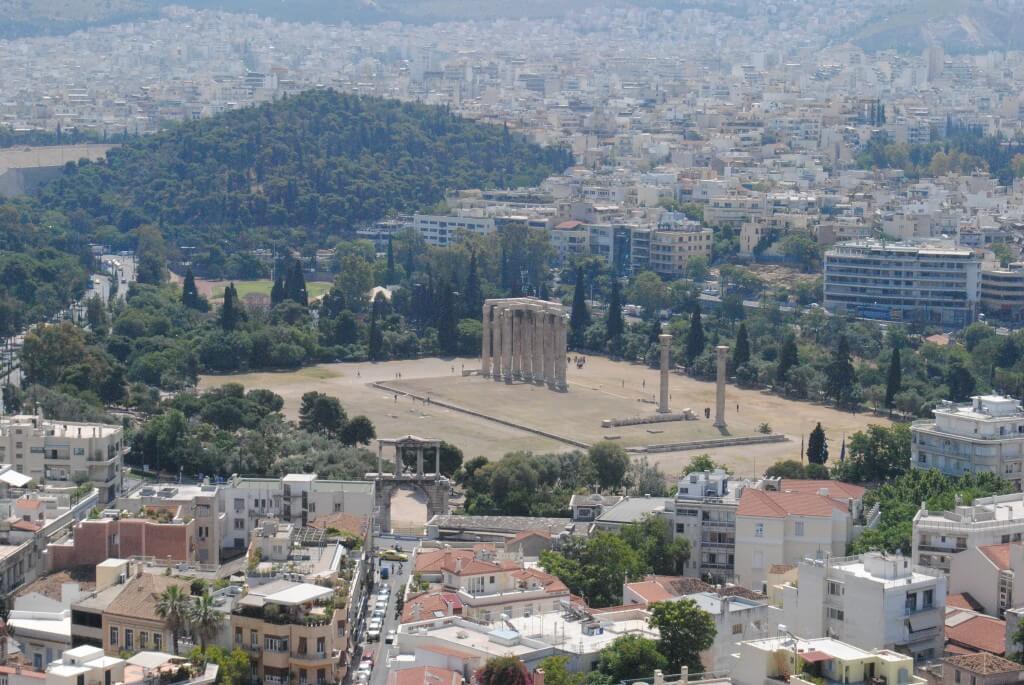 What remains of the Temple of Zeus, one of the Seven Wonders of the Ancient World.

The next location was by far the coolest. We were able to walk around the first Modern Olympic Stadium circa 1896.

However, it still pissed me off because we had to pay €5 to get inside, despite the excursion people from Norwegian claiming there would be no hidden fees. 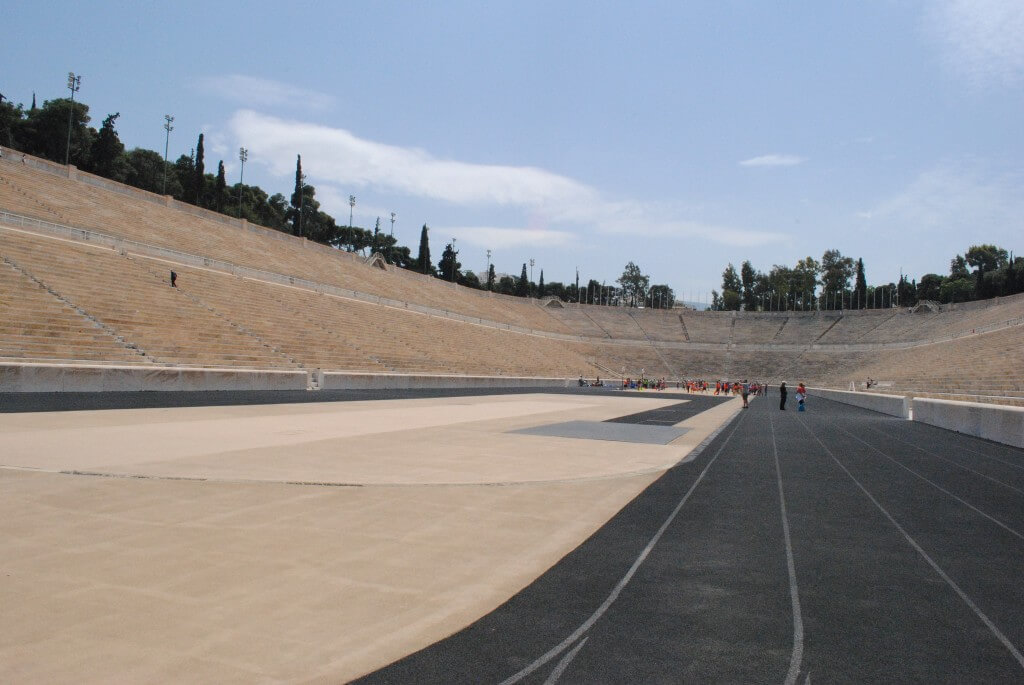 They still use the stadium for gym classes! 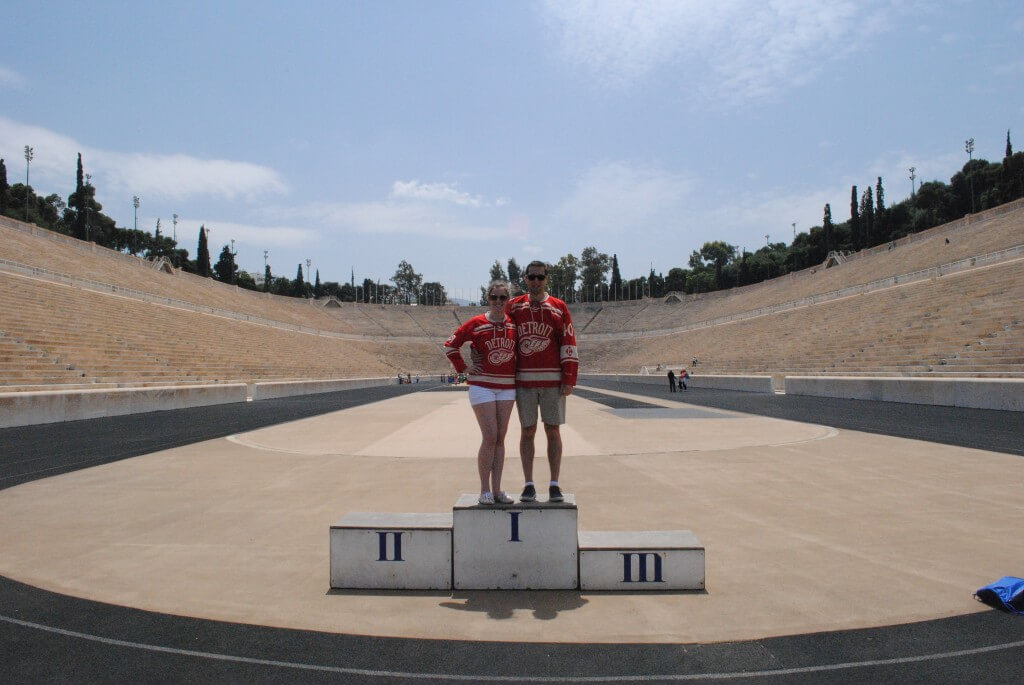 We will be submitting this one to Red Wings Fan of the Day, too.

We then got to shop around for a bit, which was fun. We were really hungry (it was 2 p.m. by the time we were able to shop on our own, and lunch hadn’t been provided), so we got some delicious gyros. I ended up getting a small greek vase and a ring, and Sean got an awesome Atlas statue.

Once we were done shopping we went back to the ship and cooled off from the 90º heat. Did I mention it gets hot there? Because it does.