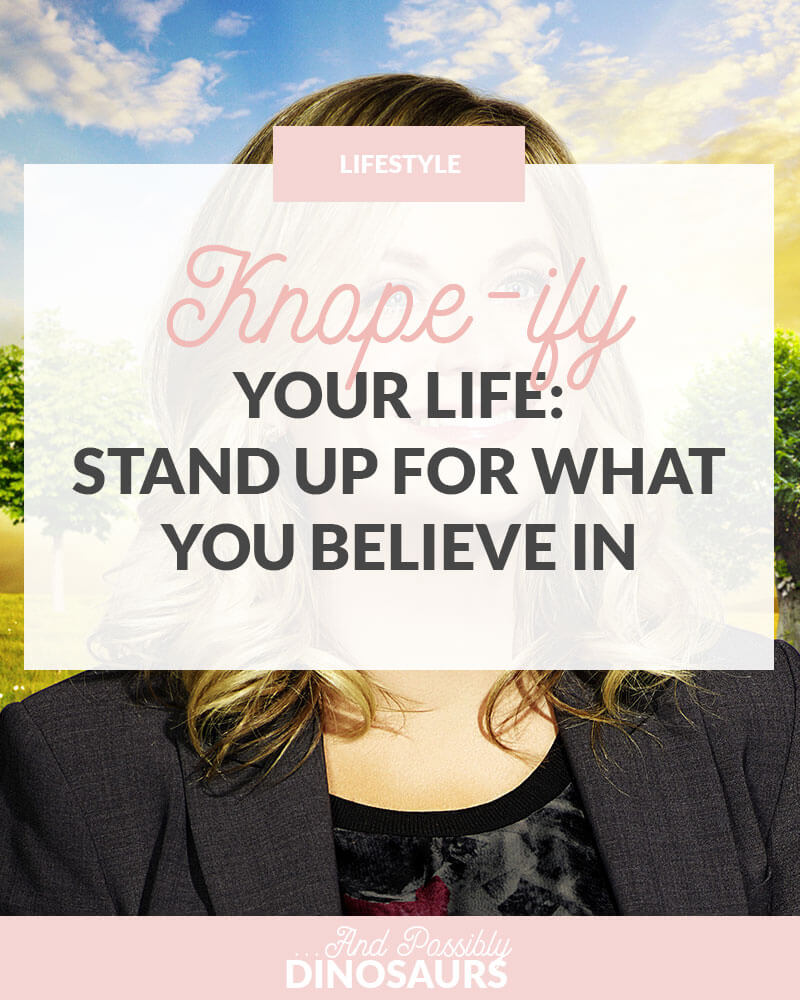 February starts next week, which is crazy on so many levels. But it’s also exciting, because it’s home to my two favorite holidays: Ash Wednesday and President’s Day!

Kidding. My birthday and Galentine’s Day!

No, that wasn’t a typo. I really mean Galentine’s Day. It’s celebrated on February 13, the day before Valentine’s Day, and it’s when you get all of your gal pals together and love on each other. Typically over some waffles. How amazing is that?!

Just about as amazing as the holiday’s creator, Lesie Knope. AKA Amy Poehler in Parks and Recreation.

So, to prep ourselves for Galentine’s Day, I’m going to be sharing a series of posts through the end of February about how to Knope-ify your life, complete with GIFs (obviously). Because she’s a pretty amazing, albeit fictional, woman, and we should all try to be a little more like her.

First up: stand up for what you believe in.

But before we get to that, we should really talk about who Leslie Knope is. Right?

Who is Leslie Knope?

In a word? Badass.

She loves her job more than anyone else there, by about 300%. She’s an incredibly liberal, government-loving idealist who loves how big ideas can change the world, even if they come from a small town like Pawnee.

Her boss, Ron Swanson, is a mustachioed, right-leaning, whiskey-drinking, gun-toting government hater who works for the local government so he can prevent it from actually accomplishing anything.

And while everyone loves Ron (including Leslie herself), she doesn’t let him get in the way of her accomplishing her goals.

That’s one of my favorite things about Leslie Knope: she stands up for what she believes in.

She knows when she’s got a great idea, and doesn’t let political bureaucracy bring her down. When obstacles are put in her way, she jumps over them and keeps going toward her dream. She respects other people and values their opinions, but never waivers when she feels strongly about something.

So, how can we all incorporate a little more Leslie Knope in our lives?

How to stand up for what you believe in

Dream big, and know your why

In order to have something worth standing up for, you’ve got to really believe in it. It’s hard to put your foot down about which burger is better: a Big Mac or a Whopper. (A Whopper, obviously.)

Think climate change, education policy, religion, and women’s health. Whatever side you stand on these issues, know why you’re there. Research the topic and really decide what makes you feel that way.

I am a proud feminist. But how can I call myself a feminist? Is it because I saw a performance by Beyonce where she ended with a giant lit-up sign that said FEMINIST? No, it’s because I’ve researched the ideals of a feminist and identify with them heavily.

Leslie has a binder for everything. While you don’t necessarily need to go that extreme, take her idea. Think through everything and understand it as completely as you can.

Don’t be afraid to speak up

So you know what you believe, and you know why. Now you actually have to stand up for it when people disagree.

I’m not talking attacks on people, here. Be civil and pleasant, but also firm. That’s why you’ve done all that research, remember? Now you can stand up for your beliefs in an intelligent, well-thought-out way.

Take my feminist beliefs, for example. If I hear someone being sexist, whether or not it’s intentional, I call them out on it. At my old job, a (male) coworker asked a group of (also male) coworkers where “you girls” were going to lunch.

Without even turning my head, I called him out on it, saying “you appear to be using the word ‘girl’ as an insult, and I don’t appreciate that.”

I could have let him slide, but his comment was making my workspace an area that didn’t align with my beliefs. And I had to stand up for myself.

Act on your beliefs

Okay, so you know what you believe and you aren’t afraid to tell people about it. But now can you act on it?

One of Leslie’s biggest beliefs is the necessity of free, government-owned parks that are available for everyone to use. She doesn’t just talk about this belief, though; she acts on it.

She not only gets herself a job as the Deputy Director of the Parks and Recreation Department in Pawnee, she also [SPOILER ALERT] gets a job with the National Park Service and fights to get a good chunk of land declared a national park rather than a campus for a new tech startup.

It takes a lot of work, but she pulls it off, dammit. Don’t be afraid to put in a lot of work toward your dreams.

Learn to be resilient

When you start acting on your beliefs, you’re going to get some push back. It sucks, but it’s the way the world works. But you can’t let that get you down.

If these are truly your beliefs, you’ve got to keep going. Leslie was turned down time and time again whens he tried to make a pit by her friend Ann’s house into a park. But she didn’t give up.

You’ve got to stick with it. Sure, being turned down sucks. Feel free to be sad for a little bit.

But then you’ve got to pick yourself back up and get back out there. If Leslie can do it, so can you.

With so many opportunities to be shut down, it’s important to love yourself. You’ve got to be sure of who you are and what you believe so you can’t be easily manipulated by other people.

These are the beliefs that make you who you are. Don’t take that lightly.

Love who you are, and don’t let other people change you.

So, there you have it. Just a few ways to be more like Leslie Knope by standing up for what you believe in.

And when you stand up for yourself, you never know what could happen.