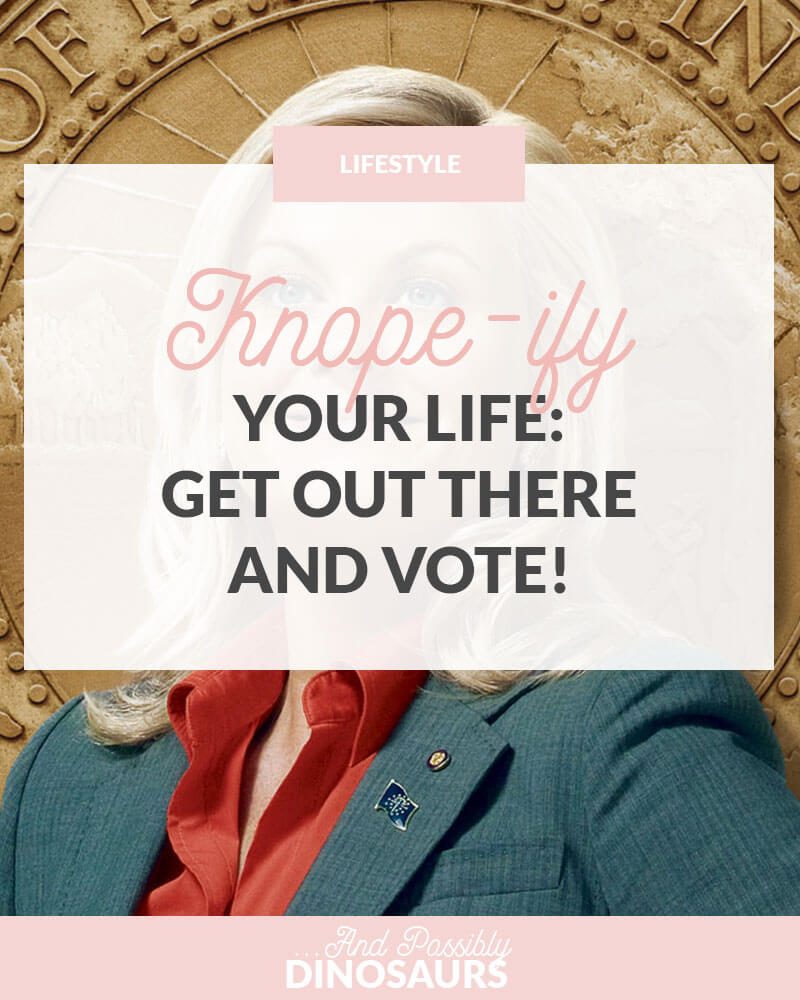 Welcome to Part 2 of the Knope-ify Your Life series on And Possibly Dinosaurs! We’re discussing ways to be more like Leslie Knope of Parks and Recreation, just in time for Galentine’s Day tomorrow!

If you’ve seen Parks and Recreation, you know how important government is to Leslie Knope. She’s super amped up about it.

But here’s the thing: for most of us, it’s really not that exciting. We know government is important, but we don’t necessarily see the impact it has on us day-to-day. Sure, we’ll see it when gay marriage is legalized for the entire country. Or on election day. But after that? Not much.

So, how can we fix that?

Knope-ify Your Life: Get Out There and Vote!

Voting is a key ingredient in being active with your government. And I’m not just talking the presidential election, here. I’m talking as many times as you are allowed to per year.

Registering is so important! Seriously. If you don’t register, you can’t vote.

The good news is, it’s really not that hard to register to vote. But I do recommend looking into your local laws when it comes to registration. For example, in the state of Michigan, voters must “present themselves before the state” before they’re allowed to vote absentee. What does that even mean?

So, “presenting yourself before the state” means either registering in person with the government or voting in person. This can really screw over college students who want to vote absentee but don’t realize until it’s too late that they can’t.

Don’t let that happen to you. Call up your County Clerks’ office and ask. 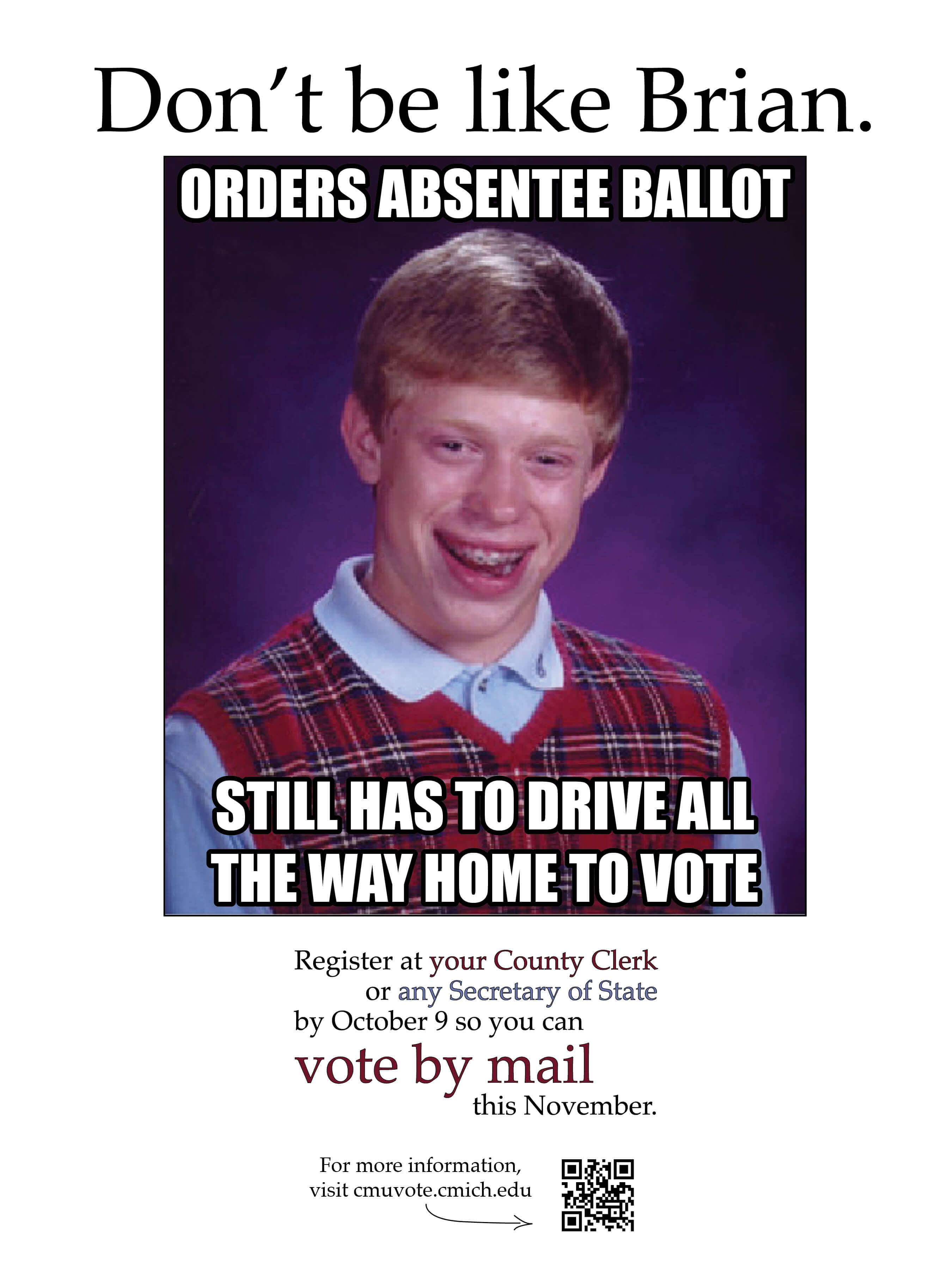 Step 2: Research the candidates and the positions

Let’s talk presidential election here, because that’s what’s in the news the most. There are five main contenders, as I see it: on the dem side, there’s Hillary and Bernie, and on the GOP side, there’s Trump, Rubio, and Cruz.

Originally, I thought I’d align most with Hillary. I liked the idea of a woman president, and I align more with the liberal side of politics. To be honest, I wanted Elizabeth Warren to run for president, but that didn’t happen, so what’s a girl to do?

Then, I took the quiz on isidewith.com. You fill it out based on your views of different issues, and it tells you which political candidate you side with most. You can even go into detail and see which things you disagree with and agree with the most. Pretty cool, huh?

And, honestly, I wasn’t wrong. I align 97% with Hillary Clinton. But what I didn’t necessarily expect? I align 99% with Bernie Sanders.

So, what types of things didn’t I agree with Hillary on?

And while these three things may only make up 3%, they’re a big deal for me. So, Bernie gets my vote. See how important research is?

In the United States, the election with the highest voter turnout is, not surprisingly, the presidential election. That’s because it’s got the most news coverage, because it affects the greatest number of people.

But, here’s the thing. Just because it affects the greatest number of people doesn’t mean it affects most people greatly. Say what?

As an example, let’s go back to my home state of Michigan, shall we? You may have heard of this little thing called the Flint water crisis.

Basically, Michigan Gov. Rick Snyder tried to save some money by switching the city of Flint (which is largely black and poor) from the Detroit water system to its own water system. Except doing so meant poisoning the citizens of Flint with lead. Whoops.

Gov. Snyder was just up for re-election in 2014. Just think if he hadn’t been re-elected, and his whole thing might not have happened. That’s how important it is to get out and vote in more than just the presidential election.

(For the record, I didn’t vote for him.)

So, study your local ballots (preferably before you get to the voting booth on election day). If you don’t know what a position actually does, go back to step 2. Figure out how it impacts your day-to-day life. Then vote based on the answers you find.

Step 4: Don’t forget about the proposals

No, I don’t mean the marriage kind.

People aren’t necessarily the only thing on the ballots. More often than not, you’ll also be voting on some proposals. Make sure you understand what a Yes or No vote on these actually mean.

Politicians sometimes try to make the wording of the proposals confusing so people don’t know which way they’re actually voting. They’re super important to your day-to-day life, so make sure you’re voting the way you want.

Some politicians are nice enough to give out brochures that say “here’s what a yes vote means, here’s what a no vote means” without being biased one way or the other. If you’re lucky enough to find one of those, use it. It’s seriously helpful.

Before the SCOTUS made gay marriage legal in all 50 states, Michigan voted against it. That’s why it was illegal in Michigan. So make sure you know what you can vote on so your voice is heard.

We all want to be like Leslie Knope. So let’s start acting a bit more energetic about the government and get out their to voice our opinions!