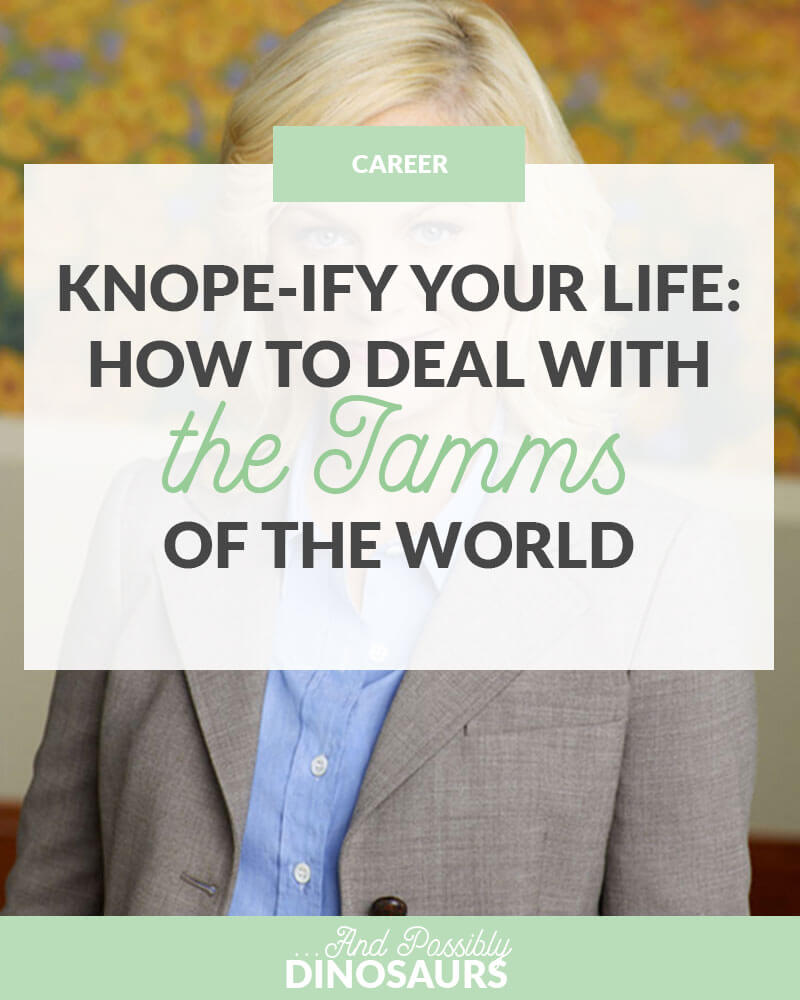 The worst character, on the other hand, is obviously Jerry Gergich.

So, what do you do when lit’rally the worst person in Parks and Rec is suddenly staring you down in real life? We’re talking someone who’s super full of themselves, does whatever they can to annoy you, and is just plain rude.

Well, you channel Leslie Knope. (And, if you can, some Chris Traeger for good measure.)

Stay positive, no matter what

Because, let’s be honest. If one of their top life goals is to annoy the shit out of you, staying positive will just end up annoying them. And eventually (hopefully) they’ll stop.

I’m not talking Chris Traeger positivity here. He’s lovably, annoyingly positive all the time. He was excited when he died in an emergency protocol test.

I mean, if you’ve got the ability to be that positive all the time, go for it. But let’s be honest, very few people do. Instead, let’s strive for Leslie-Knope-level positivity.

She’s gung-ho about basically everything (and everyone) in her life, but she knows where to draw the line. So, what are some tactics you can use to stay positive?

Leslie loves dancing. Even if you only have time for a quick dance session in your dining room, pump up the jams (not the Jamms) and let it all out. Dance as ridiculously as you can. It will seriously make you feel better.

Have you heard of the pencil trick? It surprisingly works. You stick a pencil (or a pen, I suppose) between your teeth, which forces your mouth into a smile. This, in turn, tricks your brain into thinking you’re happy, even when you’re not. Neuroscience, man.

The same thing is true of laughing. I remember a specific meeting during on of my internships in college where the president of the company made us get in a big circle. He then proceeded to laugh the most superficially awful laugh I’ve ever heard. But within 30 seconds, everyone at the meeting was cracking up. Laughing is super contagious, even if it starts out as fake. (If you’re alone, you can always look up YouTube videos of laughing babies or whatever. Be creative.)

Chat with your girlfriends

Whenever I’m feeling down, I know I can text up one of my BFFs Angela and she’ll cheer me up. We talk about blogging, food, Parks and Recreation, whatever. It helps get my mind off of things and feeling positive. And, thanks to technology, we don’t even have to make special plans to talk–we can strike up a quick conversation whenever we need to. Thanks, Obama.

I seriously love sleeping. It’s my favorite. So whenever I’m feeling hurt, angry, sad, or just not positive, I lie down for a two-hour nap, and I’m good.

Get back to reality

Ope, there goes gravity. (Had to.)

Sometimes, you need to step away from whatever is bothering you. In this case, it’s the Jeremy Jamm IRL.

Take a step back and think about the big picture. What is bothering you about this person? Are they making one of your projects impossible? How so? Is this person really being hard to work with, or do you simply not like them? Because there’s a big difference.

Step back from the situation and ask yourself these questions. Take a day off if you need. Have a glass of wine, call up your best girl friends, and find out what’s bothering you so much about this person.

Sometimes, all it takes is your best friend telling you you’re being ridiculous.

Take care of yourself

Don’t forget who your top priority is. (Hint: it’s yourself.)

Don’t put too much energy into your strong disliking of this person. They don’t deserve that kind of attention. Your energy should be spent on yourself.

If you’re realizing that you’re focusing too much on the negativity this person is spewing, walk away. If you’re able to, get away from this person entirely. Ask to move desks, work on the project on your own, whatever it takes. Your own sanity is 100% more important than anything else.

Stand up for yourself

Sometimes, this Jamm IRL needs to be called out for what they are: a dick. In fact, it’s highly possible that no one has ever old them so before.

Mind you, it’s important that you don’t stoop to their level. Be kind, but firm. Tell them what’s bothering you, why it’s bothering you, and what would help both of you feel more comfortable. Be as specific as possible, so you don’t just start rambling without accomplishing anything.

As temping as it might be to call them names and scream in their face, resist. Seriously. I beg you. You’ll likely just regret it later.

Although, there was this one time I told this guy people only liked him because he was rich. It was one of those word-vomit situations where I could hear what I was saying but I couldn’t do anything to stop myself.

It was actually really satisfying. It was eight years ago now, but I still think back on it fondly. So maybe go ahead and yell, but only if they really deserve it.

When all else fails, pull the ultimate Leslie Knope

Let’s be honest, though. Sometimes you can’t escape situations with Jeremy Jamm. The project you want to push through is life-changing, and he’s doing everything he can to get in the way.

You can’t get him fired, and calling him names isn’t doing anything. He’s actually enjoying how miserable he’s making you.

In that case, there’s really only one logical option: drive yourself to JJ’s Diner and eat all of the waffles. Because honestly, this person is a dick and you deserve it.