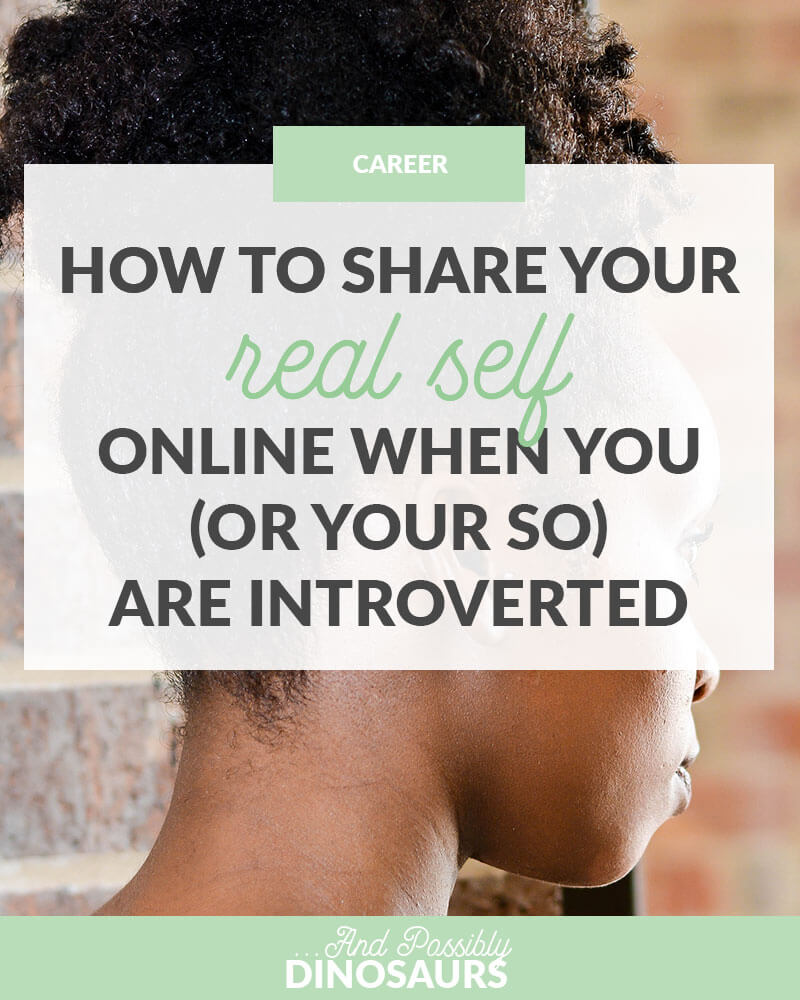 Bloggers are told time and time again that we have to infuse our personality into our brand. And it’s true! To make yourself stand out, it’s important that you share your real self online so your audience understands who the heck they’re talking to.

So, what do you do when you’re super introverted and don’t like talking about yourself? Or maybe your significant other has very intentionally created their personal brand at work, with friends, etc., and doesn’t want you to share the personal, intimate stories that are just for you.

Don’t panic! It’s still totally possible to share your real self online, even when you (or your significant other) are introverted.

1 | Understand what’s uncomfortable about it.

First, in order to make a game plan, you’ve got to understand what makes you or your significant other so uncomfortable.

In other people’s cases, you’re just uncomfortable talking about yourself. Maybe you think people won’t care, or that they will… in a negative way. Other people are just overly private.

If this is more on your SO’s side than your own, try to find out details. What are they uncomfortable with? Is it okay to use their name? Or maybe they’d be more comfortable if you just used their first initial, or just “my boyfriend” or “my wife.” Can you share stories about things you do together? What types of things? These questions will be helpful to build a baseline of what is okay and what isn’t.

Whatever the reason, identify it. Understand it. Without a general understanding of the why, you’re not going to be comfortable enough to share your real self online.

Once you’ve identified the why, start slow. Share little bits at a time.

Maybe at first, you start talking about your dog. It’s not the most personal thing in the world, and let’s be honest… who doesn’t love dogs?

Once you’re more comfortable, maybe share about the city you live in. Or if that’s too big of a jump, mention the state. What do you like about it? What do you want people to know?

Just like with anything, it’s okay to start slow and ease yourself into it. While it’s important to stretch your boundaries when you can, don’t give yourself a panic attack just because you’re forcing yourself to be more outgoing. Take as much time as you need.

3 | Only share your real self online as it directly relates to your niche.

If you don’t feel comfortable talking about your personal life, don’t. Just talk about things you’ve faced within your niche.

Lets’s say you’re a food blogger, and you’re gearing up to share your favorite mac-n-cheese recipe. Talk about how you love mac-n-cheese, but you’ve struggled for the longest time to find a recipe that doesn’t end up super gritty when you reheat it. (#thestruggleisreal)

That’s not super personal, right? You’re not sharing your whole life story with your audience, but you’re still allowing them to get to know you a bit.

And if you don’t want them to know that, it’s totally okay! Some things are meant to stay personal, and there’s nothing wrong with that. They’re not going to know they’re missing out on half the story, but they’ll still connect with you because they’ve faced the same gritty-reheated-mac-n-cheese problem that you have.

4 | Talk to your SO if you’re having trouble with it.

Let’s say you’ve talked with your significant other about what you can and cannot share online, and they’ve limited you pretty hard. If you’re an over-sharer like me, that’s going to be difficult to adjust to.

Give it some time, but if you’re still having trouble, talk to your SO about it. Explain where you’re coming from and why you feel so strongly that you want to share a particular story about them.

I personally get a lot out of sharing something with other people. I thrive off of people’s reactions to my jokes, their shared excitement about my current obsession. It’s a very Millenial, social-media-age thing. And I’m not saying it’s a good thing, but I at least understand where my desire to share comes from.

As you talk about this with your SO, it’s likely one of you will have a realization. Either they’ll realize they don’t feel as strongly about it as you do, or you’ll realize your need to share is less important than the actual moments you have with them.

5 | If you’re going to share anything private, clear it with those people first.

Let’s say you’ve gotten some sort of approval to share about someone on your blog. Maybe your SO said it’s okay to use their name, for example. Whenever you’re mentioning someone else on your blog, clear it with that person first.

When I started writing this blog post, I asked Sean if it was okay first. I haven’t mentioned him a ton, but he is mentioned in it. So I want to make sure he’s okay with the topic before I start writing it.

Plus, how hypocritical would it be if I didn’t ask for his approval before writing this? #awkward

The same goes for friends and family members. Maybe you’re living at home with your mom, and mention something about how your house is in dire need of some spring cleaning. That could really embarrass your mom, who prides herself on being really clean and organized, most of the time.

Remember: whenever you’re sharing a story, you’re likely not just sharing your story. If there are other people involved, you’re sharing their story, too. So be considerate and ask for their permission before broadcasting it to the world.

But most importantly, in the end, remember what’s best for you.

Does that mean you can’t be a blogger? Not at all! Just share what you’re most comfortable with. If that means you’re not talking about your relationship, your pets, your house, or even the city you live in, that’s totally fine!

Don’t compare the amount you’re sharing to the amount other bloggers are sharing. It’s not fair to compare your introverted self with someone who’s super extroverted. And more importantly, it’s not healthy. Everyone is different, so do what’s best for you — not what’s best for someone else.

If it’s your significant other who’s super introverted, on the other hand, you have two choices.

One, you might need to accept that this person might not be right for you. Harsh, right? But if you really want to share your real self online, and you have a hard time accepting how private your significant other wants to be, it just might not work out.

If sharing your story is a fundamental aspect of your life, you’re going to be better off finding someone who’s okay getting caught up in that. After all, you don’t see Taylor Swift dating super shy people who don’t want any attention. It’s just not realistic for her lifestyle.

Conversely, you can take the Kristin Bell / Dax Shepard approach. They don’t post anything on social media or enable photoshoots of their kids. They know that they have chosen to live their lives in the public eye, but they respect that their kids might not want the same. So, they’re waiting until their kids can choose for themselves.

You can take this same approach with your significant other and your blog. If they truly don’t want to be featured, don’t feature them. I know you want to share all of their amazing qualities with the world (I get it), but you have to accept that they might not want the same thing. And at a certain point, you have to respect their wishes. After all, it’s not just your life you’re sharing about. It’s theirs, too.

It can be hard to share your real self online, even when you’re not introverted. Hopefully taking these tips into consideration will help make the process a little easier for you the next time around!