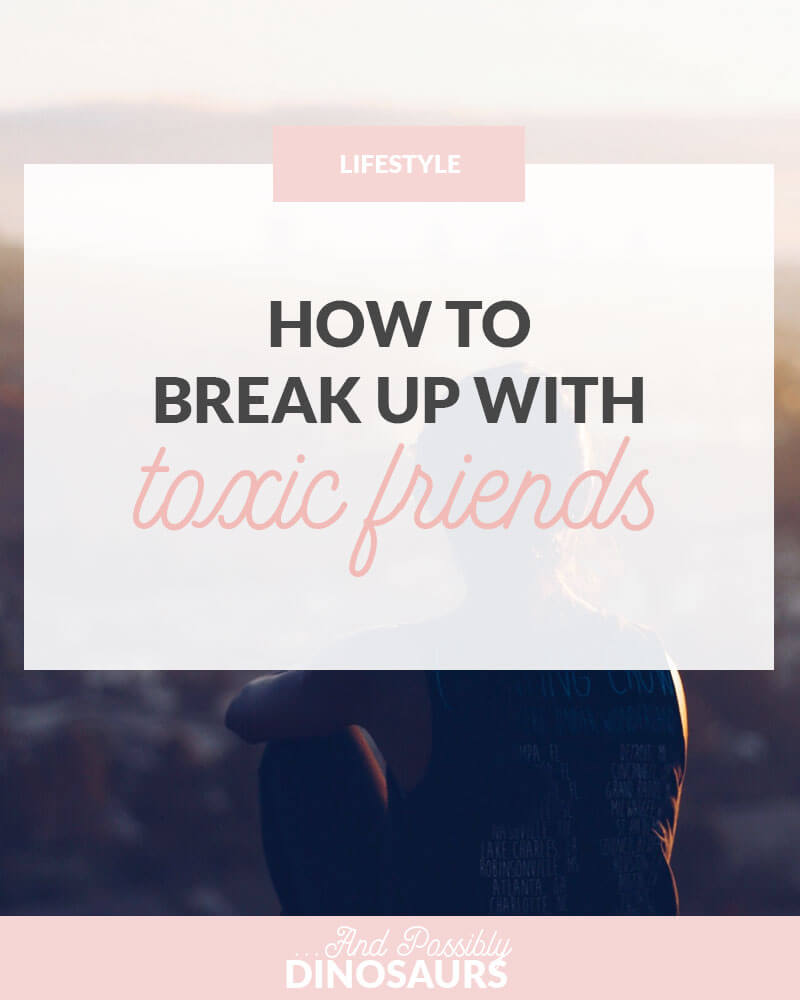 Toxic friends: we’ve all had them. They’re the ones who spend most, if not all, of their time complaining and being negative. They always turn the conversations back to them and their problems. They bring us down.

If it’s true that we are the average of the people around us (spoiler: it is), then why do we bring ourselves down by surrounding ourselves with toxic friends?

It’s time to break up. It’s not you. It’s them. But where do you start?

Identify What a Toxic Friend Is

The characteristics of a toxic friend can be different for everyone, so it’s important to identify what it means to you. Is it someone who brings you down all the time? Someone who’s rude? Selfish? Negative? Write these characteristics down if you need to.

Take your time with this step. Monitor your conversations and make note of how different things make you feel. You want the list to be pretty exhaustive. Remember: you’re important. Don’t let things slide if they make you feel like crap.

Make Sure You Aren’t a Toxic Friend

This is a pivotal (and difficult) step. Once you’ve identified the characteristics of a toxic friend, see how many of them apply to you. Pay attention to how you interact with people. Before breaking up with your toxic friends, you’ve got to clean up your own act first.

I was definitely a toxic friend for a long time. I was selfish, negative, and complained a lot. Luckily I had a few people point this out to me, and I was able to clean up my act. If I had tried to cut out my toxic friends before then, it would have been a bit hypocritical.

Now that you’ve cleaned up your act, it’s time to go back to your list. Which of your friends identify with most, if not all, of these things? They’re the ones you want to break up with first.

If it helps to rank your friends in order of toxicity, do it. Prioritize the ones who make you feel the crappiest. Eventually you’ll only have good friends around you, but this process will take time.

Steer the Conversation Toward Positivity

Once you’ve identified your toxic friends, it’s time to give them a chance. Maybe it’s partially your fault that the conversations have been negative. Every time you feel negativity creeping in while you’re talking to your toxic friends, steer the conversation the other way. Bring out the good side of the scenario. Compliment them. Anything to bring some positivity into the situation.

This goes back to the idea that we are the average of the people we surround ourselves with. If you’re more positive around them, maybe they’ll be more positive, too. You never know how much a little bit of positivity can change things.

Be Honest with Them

This might be the most challenging part of the breakup. If you’ve infused the conversation with positivity and they’re still toxic, it’s time to be honest and open about it with them. Tell them how it affects you. Tell them you’re worried about them. Give them a chance to clean up their act. If you’re important to them, they will.

This might take a few tries. Make sure they really understand you, though. Don’t let them brush it off. Your feelings are important, so don’t let them get away with hurting you. The more you remind them, the more they should take it seriously.

Okay, I lied. This is the most challenging part of the breakup. After you’re honest with them, they might be in denial. They’ll tell you you’re overreacting. They don’t see anything wrong with how they act. They’ll tell you you’re misinterpreting their words and actions. But here’s the thing: your feelings are real. Whether or not you’re misinterpreting their intentions, you are still feeling crappy based on their actions.

So at some point, you have to accept that they aren’t going to change. That it’s time to break up. And you don’t need to try to explain yourself any more. You’ve been honest and given them a chance to prove their love to you. And they didn’t take the bait. So that’s when you tell them that you deserve better. That you wish it didn’t have to be this way, but they’ve given you no other choice. You can’t be friends any more. And you walk away.

Let Yourself Be Sad

This step cannot be forgotten. A breakup with a friend is just has hard (and sometimes harder) than a breakup with a significant other. They’ve been through a lot with you, and might know you more than you know yourself. So you have to let yourself be sad. It’s perfectly normal, and it’s an essential part of the healing process.

Surround Yourself with Positivity

That being said, you can’t just be sad about the breakup. While you’re mourning the loss of your friend, surround yourself with positivity. This can come in many forms: positive people, things you love, etc. These things will make you happy, which can help you become a better person. After all, isn’t that what this whole process is about? Cutting out the negativity and replacing it with positivity?

So go out there and do it. It will never be an easy thing to do. If not now, when?