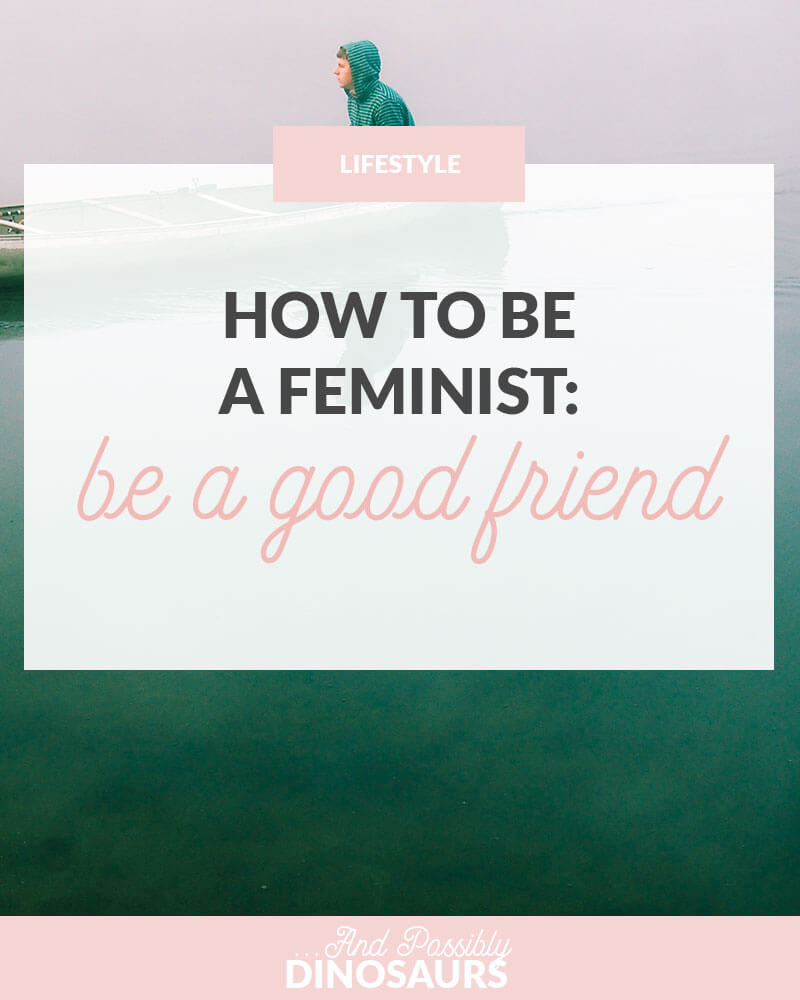 Hey everyone! It’s Caitlin here. I’m excited to announce that Angela Morales is going to be a recurring contributor! She wrote her first post for And Possibly Dinosaurs back in September, and now she’ll be blogging more regularly! This first one is about how to be a feminist by being a good friend. Look for her name and bio on each of her posts!

It can’t be that hard… right?

It’s a lot harder than people think, and friendship is one of those things you don’t really know you’re good at until someone screams “YOU’RE A GOOD FRIEND!” at you.

The other night, my coworker and I were texting each other about her post in a Facebook group we’re both in. It was about waiting for the other shoe to drop when you realize that you’re really happy and that things have fallen into place for a while.

She explained that she was worrying it was all a façade, that it would fall apart, and that her life and relationship changes going on are super cheesy and cliche.

This is where it got real.

I told her exactly how I felt about the situation. That she deserved all the happiness and good things that have come her way. That she worked for, and earned, each and every ounce.

This girl and I have only been friends since we started working together (in June, so for like 2 seconds), but in order to take this job, she packed her whole life up in her tiny car and drove across the country by herself with no certain future.

I told her all this because, besides it being 100% true, that is how I really feel.

Then she pretty much yelled, via text message, that I was a good friend.

I asked Caitlin if I could write another Feminist Friday post, this time about friendship, because it’s been a hot topic in my brain the last few months. In the last year, I’ve seen some friendships blossom and grow into awesomeness, but I’ve also seen a few that I thought were tried and true fall apart for a multitude of reasons.

The last year has really made me doubt my ability in being a good friend. I pretty much broke up with my best friend of a decade because we were/are in very different places in our lives and I got really tired of having my feelings hurt for reasons I couldn’t comprehend.

However, I also got to reconnect with two old basketball teammates, a good friend from kindergarten, and friends from college, and made some amazing new friends along the way.

It’s been a weird year for me and friendship, but here’s what I’ve gotten out of it:

How to Be a Feminist: Be a Good Friend

Commit to your plans, to your life, and do everything you can not to bail.

I get that sometimes life happens and you have to change your plans or, in a sense, bail on the plans and people you had already committed to. That’s okay, just let them know as soon as you can so they can accommodate for it. Don’t take advantage of other people’s time.

Reschedule if you need to, that’s fine too. Don’t go AWOL on people who care about you.

Oh, and for the record: do you best not to over commit. It’s bad for everyone involved, and stretching yourself too thin is never good.

Plus, when you don’t get to see each other all the time, the 3 hour phone calls til 2 a.m. and the lunches that turn into dinners are so worth it.

Listen to your friends. They’ll listen back if they’re good ones.

Lean on each other, but lift each other up at the same time. Vent, yell, scream, cry, talk, gush, whatever. Be there for each other and be present.

If you get to a point where you feel like you’re just there out of obligation, you need to reevaluate how you see your friendship. Part of the idea of friendship is being there for each other, and being there to listen is a HUGE part of that.

You might not always have any advice for them, or you might say the wrong thing, but you’re there. That’s usually all that matters.

Okay. I feel like I need to teach a lesson on how not to be that friend.

You know who I’m talking about. The one who gets overly mad when you hang out with other friends or your significant other… or the one who awkwardly talks about the friends they’ve never met… or the one who doesn’t even try to get to know your SO.

Secondly, your friend doesn’t belong to you.

I do my best to make sure I don’t do this, but I’ll be completely honest and say that I have. It wasn’t a good idea at the time, and it still isn’t.

All in all, you don’t have to like other friends or significant others, but as long as your friend is happy, and they aren’t in a dangerous place, try to keep your opinions to yourself.

When someone’s significant other isn’t my favorite person, and they ask me my opinion, I’ll tell them that while that person might not be my favorite, as long as my friends are happy and okay, so am I.

If the tides change and they ask me, I’ll ask permission first, but I’ll be honest.

Don’t only come around when you need something from the other person.

Taking advantage of someone is the worst when you’re on the receiving end and you know it. Keep that line of friendship open so that you have a relationship that warrants the ability to do something like this and it doesn’t make your friend feel used.

Friendship is a give and take type thing. Try to give more than you take, and find people who want to do the same.

Because when you do, you end up with amazing friends who become family, regardless of where they live, what they do or who they associate with.

Do you have any other tips on how to be a good friend?