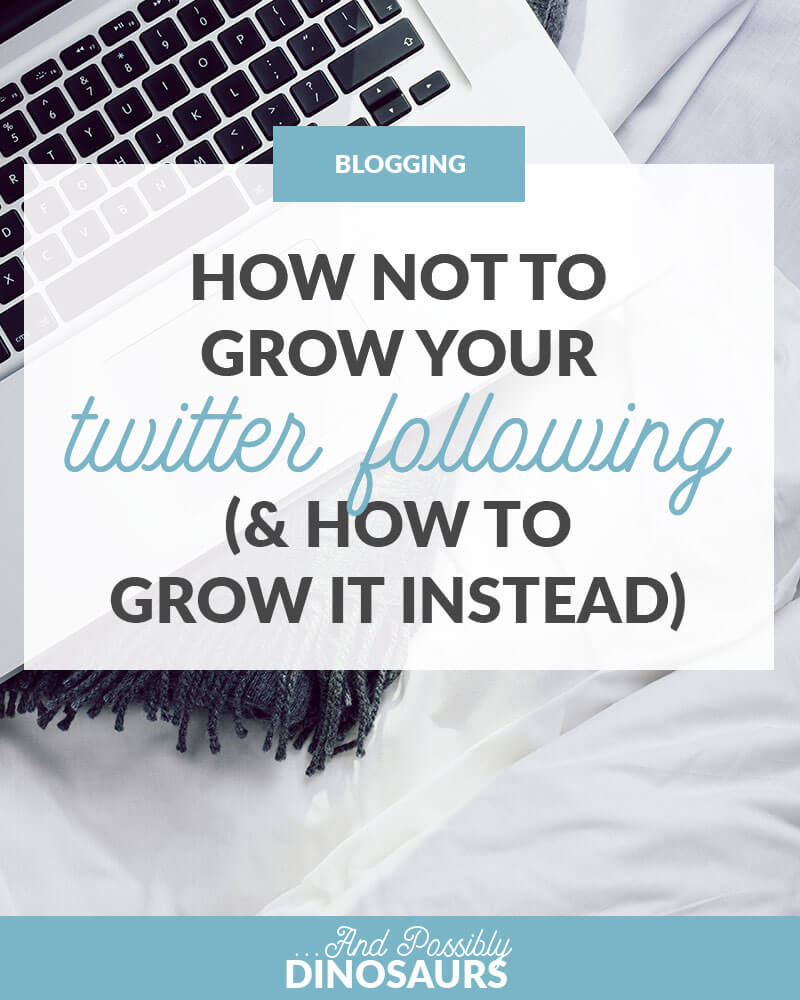 A few years ago, as I was just getting started with my blog, I got some advice on how to grow yourTwitter following. She told me that I could grow my current following (about 400 followers) to 5,000 within two months.

Sound too good to be true? I mean, technically it wasn’t. I did, in fact, grow my following to 5,000 followers (though it did take a little longer than two months) using her technique.

But it really wasn’t a great strategy, and I wouldn’t recommend it to anyone.

The general idea of Follow for Follow (F4F) is that you follow a ton of people all at once, and within a few days many of them follow you back. You then go back and unfollow all of the people who didn’t follow you back, and repeat.

(Does this remind anyone else of w4w? #myspace)

I used a specific website (I’m not going to link to it because I don’t want you to use it) that showed me a list of Twitter profiles I’m following who don’t follow me back. I then just had to mass-unfollow all of those people (except celebrities and brands that were obviously not going to follow me back, but I still wanted to follow them).

I even paid for an upgraded version so I could unfollow more than the allocated 200 per day on the free account.

I did this every three days or so, starting in January, and got to 5,000 followers by the beginning of May.

That seems like great results, right? This is why F4F is super tempting. You can grow your Twitter following super quickly if you’re willing and able to put in the time.

In conjunction with F4F, I was using a WordPress plugin, Revive Old Post, that automatically tweeted out my blog posts every four hours. (I still use this plugin, but I’ve changed it to every 24 hours.)

Because of this combination, my blog’s traffic was growing a respectable amount. Not huge, but still respectable.

So, in a roundabout way, when you grow your Twitter following, you can also grow your blog’s traffic.

Here’s the deal, though. F4F is a terrible idea. I seriously wouldn’t recommend it to anyone. Why is it so terrible? I’ve got four reasons for you.

1 | It takes a lot of time to sit there and follow / unfollow people.

You’re sitting at your computer clicking the same button on roughly 3,000 profiles every day, in hopes that you’ll gain about 200 followers.

No thanks. I’d rather spend my time engaging with people and creating new relationships than growing my Twitter following by being spammy.

2 | If you want to speed up the process, you have to pay.

If I could get that money back, I would. But alas, I cannot. What a waste.

3 | It fills your feed up with a ton of random shit.

This is easily the worst drawback. F4F caused me to stop using Twitter (outside of Revive Old Tweet posts) because my Twitter Feed was the biggest cluster.

What’s the point in trying to grow your Twitter following if it creates an environment you don’t want to spend time in? Oh right, there isn’t a point.

4 | It made engagement impossible.

Because your Twitter feed becomes littered with millions of tweets every day, engagement is impossible. At one point I was following about 4,000 people, so I couldn’t build relationships with any one person.

Building a relationship means understanding them and their interests, and if your feed is getting thousands of tweets every minute, these things aren’t easy to find.

You can either try to connect with everyone (ineffectually), or wait for people to reply to you (not ideal in the slightest).

A few months ago, I decided to overhaul my Twitter and unfollow anyone whose name, photo, or Twitter handle I didn’t recognize.

After several weeks of meticulous unfollowing, I now only follow 230 people. The number of followers has dropped from more than 5,000 to about 3,800 (and lowering every day), so I technically still have a large following because of F4F. But it makes me feel pretty skeezy.

So, what are you supposed to do if you want to grow your Twitter following?

Instead of F4F, it’s important to prioritize engagement and relationships instead of the number of followers you have. If you’re patient and really work on engagement, your following will grow. Just know that it might take a while.

So let’s discuss some ways to grow your Twitter following through engagement.

This is one of the biggest ways I’ve met people on Twitter. Join a Twitter Chat (if you don’t know how they work, check out this post) and be super engaging with other people. Don’t wait for people to interact with your tweets, interact first!

This is hard for me, because I’m definitely an introvert. But just remember: this is the internet. You don’t have to put yourself out there and worry about what you look like, sound like, etc. Just say something genuine and you’ll likely be able to start a conversation!

By the way, I’m looking for some new Twitter Chats to join. Got a suggestion? Let me know in the comments!

This one is a bit time consuming, but hella worth it.

As you’re coming up with other blogger’s articles to share on social media (remember, you should be sharing your content 20% of the time, and other people’s content 80% of the time!), @mention them in the tweet. On their website, find the link to their Twitter and copy and paste their handle into the message as you’re scheduling it.

Typically, they’re going to reply to your tweet thanking them for sharing it. This is a great opportunity to engage with them! It’s tempting to just favorite the tweet or reply with “you’re welcome!” (or worse, not react at all!) But this doesn’t really help you engage with these people, and therefore doesn’t help you grow your Twitter following. Instead, reply with why you thought it was so helpful or how excited you are to put their blog post into action. But remember to be specific—copying and pasting the same thing over again is super spammy and obvious!

I love when people tag me in tweets about my blog posts. Not only does it make me feel really good, but I notice the people who share more than one. So if you really love a blogger, they’re going to notice if you @mention them every time! If you don’t they might not have any idea, and therefore might not strike up a conversation with you.

3 | @Reply to people’s tweets (whether or not they’ve mentioned you first!)

And finally, be engaging! @Reply to people’s tweets, even if they haven’t mentioned you first. You likely already do this with your friends on Twitter, so make new friends to grow your Twitter following by @replying to the other people you follow!

Whether it’s a blog post they shared that you really enjoyed, a funny comment, or something that really resonates with you, let. them. know. Sure, you could retweet it or favorite it. But that’s not going to get their attention as much as a @reply. Plus, it’s impossible to start a conversation without any sort of @reply.

It should also go without saying, but… @reply someone if they @mention you in a tweet! Thank them for sharing your blog post, continue the conversation, etc. Be super engaging!

While I gained a relatively large following thanks to F4F, it’s the last way I suggest you try to grow your Twitter following. Instead, be super engaging by starting the conversation and continuing it when people start one with you!

What are your favorite techniques to grow your Twitter following and be super engaging? Let me know in the comments!