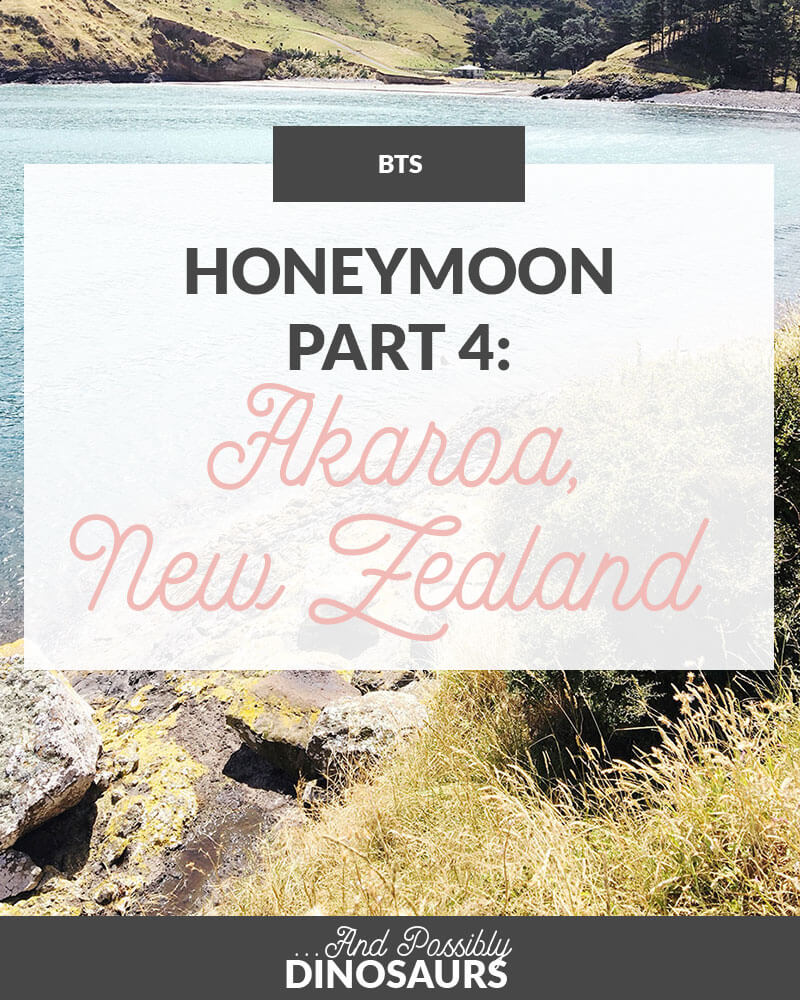 The day after we traveled to Dunedin, we arrived in Akaroa, which is about an hour away from Christchurch on the eastern side of the southern island.

Akaroa is home to the largest penguin colony in New Zealand, so you bet we scheduled a tour with Pohatu Penguins.

When we arrived, it was even colder and windier than it had been in Dunedin. I was a bit nervous, because the tour we scheduled was for sea kayaking. I’m not a strong swimmer / kayaker / outdoor adventurer in general, so I would have been nervous on a warm and sunny day. But it was cold out, and the wind was making the harbor quite choppy.

We got into port at about 10 a.m. (after some delays due to the choppiness of the water), but our tour wasn’t scheduled until noon. We found the man from our tour company, who said they were going to make a decision at 11:30 on whether we’d go or not.

In the mean time, we walked around downtown Akaroa at all of the cute shops. We got some ice cream, which wasn’t the best idea for how cold it was, but it was still 100% worth it. 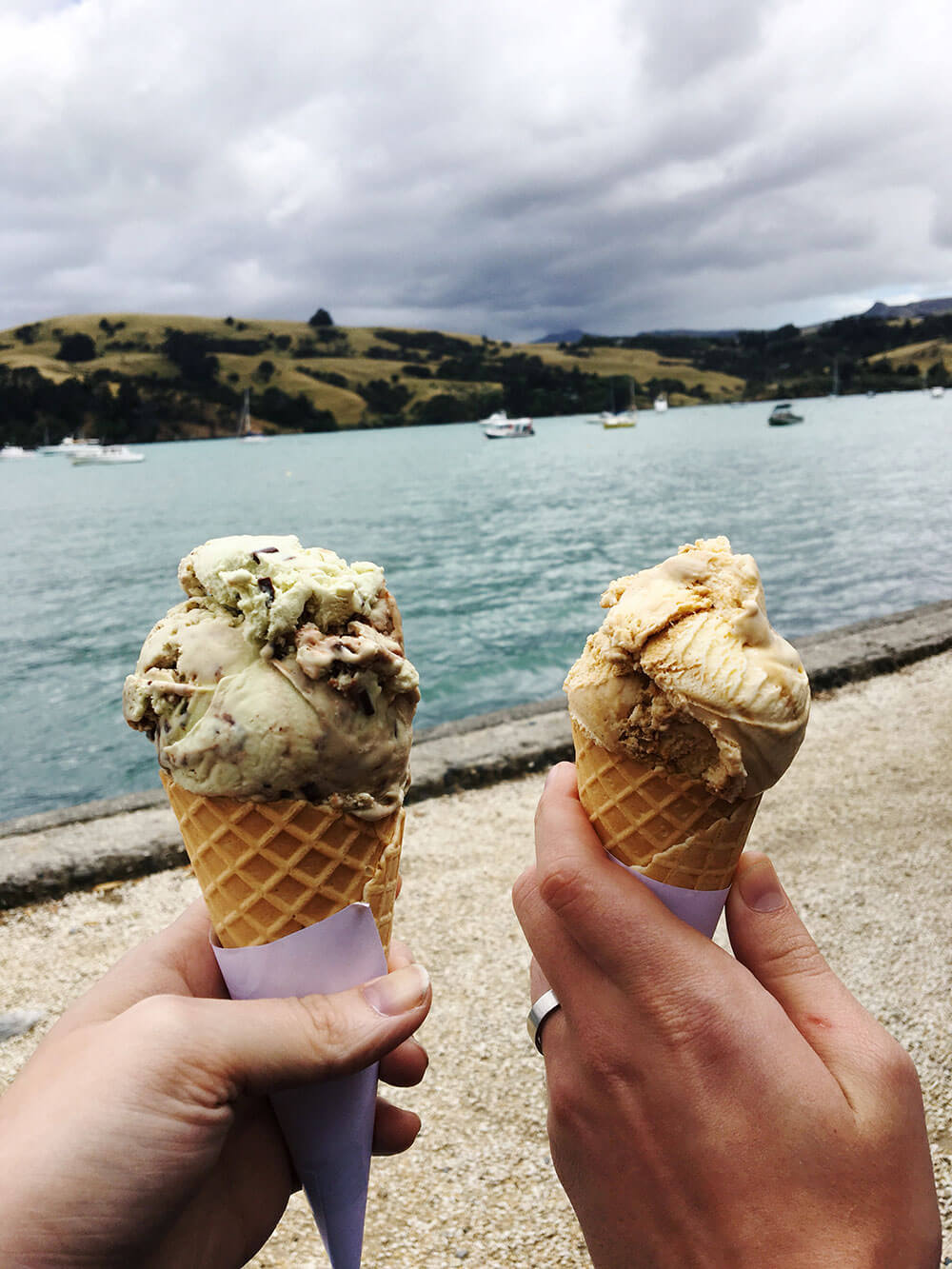 Fun fact about Akaroa: it used to be called Fakaroa (FAK-uh-row-uh), which is the Māori word for “long harbor.” But tourists didn’t really like the sound of it, so they dropped the F and named it Akaroa.

By 11:30 we returned to the pier and found out our sea kayaking tour was canceled. However, they had a similar tour booked that was the same cost, the same time, and we’d still see penguins, so we switched to that tour.

Needless to say, I was not disappointed.

Okay, so there was one disappointing thing: we didn’t see any Hector’s dolphins. They’re the smallest and rarest dolphins in the world, and they’re only found in New Zealand. We likely would have seen them if we went kayaking, but with how choppy the water was, we couldn’t see them from land.

The tour was a lot of driving (which I was okay with after how much biking we did the day before), but we had plenty of opportunities to get out and take photos.

After driving around and learning more about Akaroa, we finally arrived at the penguin colony! Our tour guide was a conservationist, so we got to learn a lot about why this penguin colony is so strong.

More than 30 years ago, a couple, Francis and Shireen Helps, bought acres upon acres of land in the Akaroa area. There was an existing penguin colony on their land, and they noticed every year that the penguin population was steadily declining. So they decided to do some research and stop the decline from happening.

What they discovered was three main problems endangering the penguins: predators, fishing, and tourism.

Before New Zealand was settled, insects, birds, and bats were the only things living on the islands. There were no mammal predators until the British brought them along when they colonized New Zealand. This means animals like dogs, weasels, and stoats have taken over, since they have no natural predators themselves.

The penguin colony in Pohatu was such easy pickings for the weasels and stoats would catch a penguin on the beach, drink all of its blood, and then move onto the next penguin and do the same thing. There were so many penguins available that they didn’t even bother eating the meat; they just drank their blood. So when the couple would wake up in the morning, there would be dozens of penguin bodies all over the beach.

Now, they have traps set up throughout the colony for predators. They’re not attractive to the penguins, so they don’t have to risk accidentally killing a penguin. It’s impossible to solve the predator problem entirely, but these traps have definitely helped the penguins thrive a bit more.

Akaroa is a major fishing area. One major problem for the penguins is that they would get caught in fishing nets and drown. Once the fishermen pulled their nets back in, they’d simply toss the dead penguins overboard; they were collateral damage.

It took 15 years, but the Helps fought to make Flea Bay, where the penguins live, into a marine reserve. Fishing is no longer allowed in the entire reserve, and repercussions if you’re caught are steep.

Our tour guide was kayaking in the reserve on day and saw some fishermen. He told them that they were in a marine reserve and needed to leave, but they didn’t take him seriously because of his Irish accent. He then called the police, who arrested the men and confiscated their fishing boat. Which cost them about $200,000. #sorrynotsorry

Once it became widely known that there were penguins in Flea Bay, tourists started coming to the public beach to camp. At nighttime, they’d get their flashlights out and wander the beach in search of penguins.

The problem is, the tourists would scare the adult penguins, who had been fishing throughout the day, so they’d stay in the water instead of crossing the beach to return to their nest. Because of this, they’d never be able to deliver food to their babies, who would starve.

To help solve this, the Helps started the penguin tourism group to bring people to the penguins in a more controlled setting. They also do overnight packages, and have set up blinds throughout the bay where you can watch the penguins return to their nests, but they aren’t aware of your presence. Plus, these tours help fund the conservation work they’re doing, so it’s a win-win! 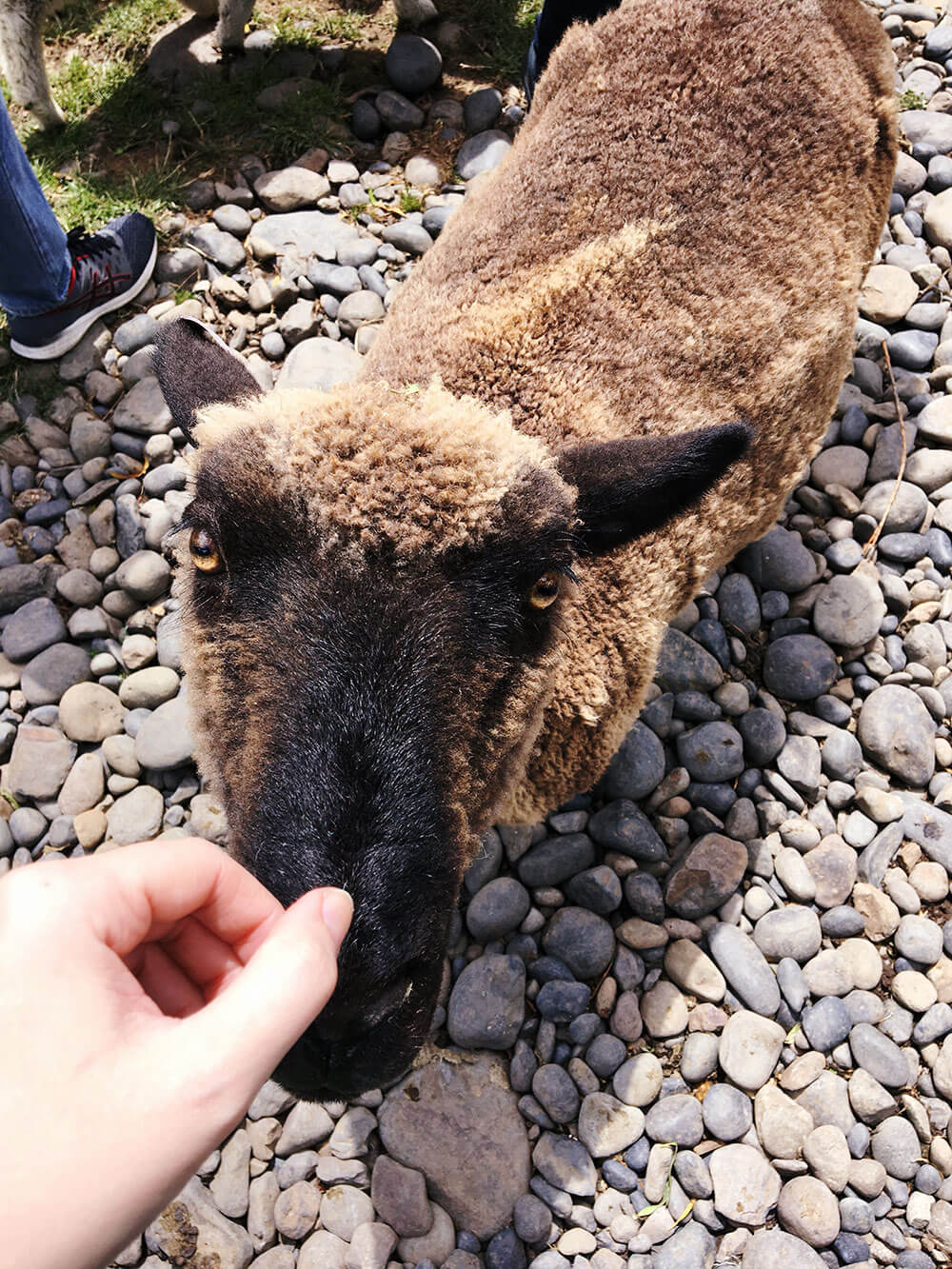 When we first arrived at the home base for Pohatu Penguins, we were greeted by dozens of hungry black sheep. We got to hang out and feed them before hiking through the penguin colony. 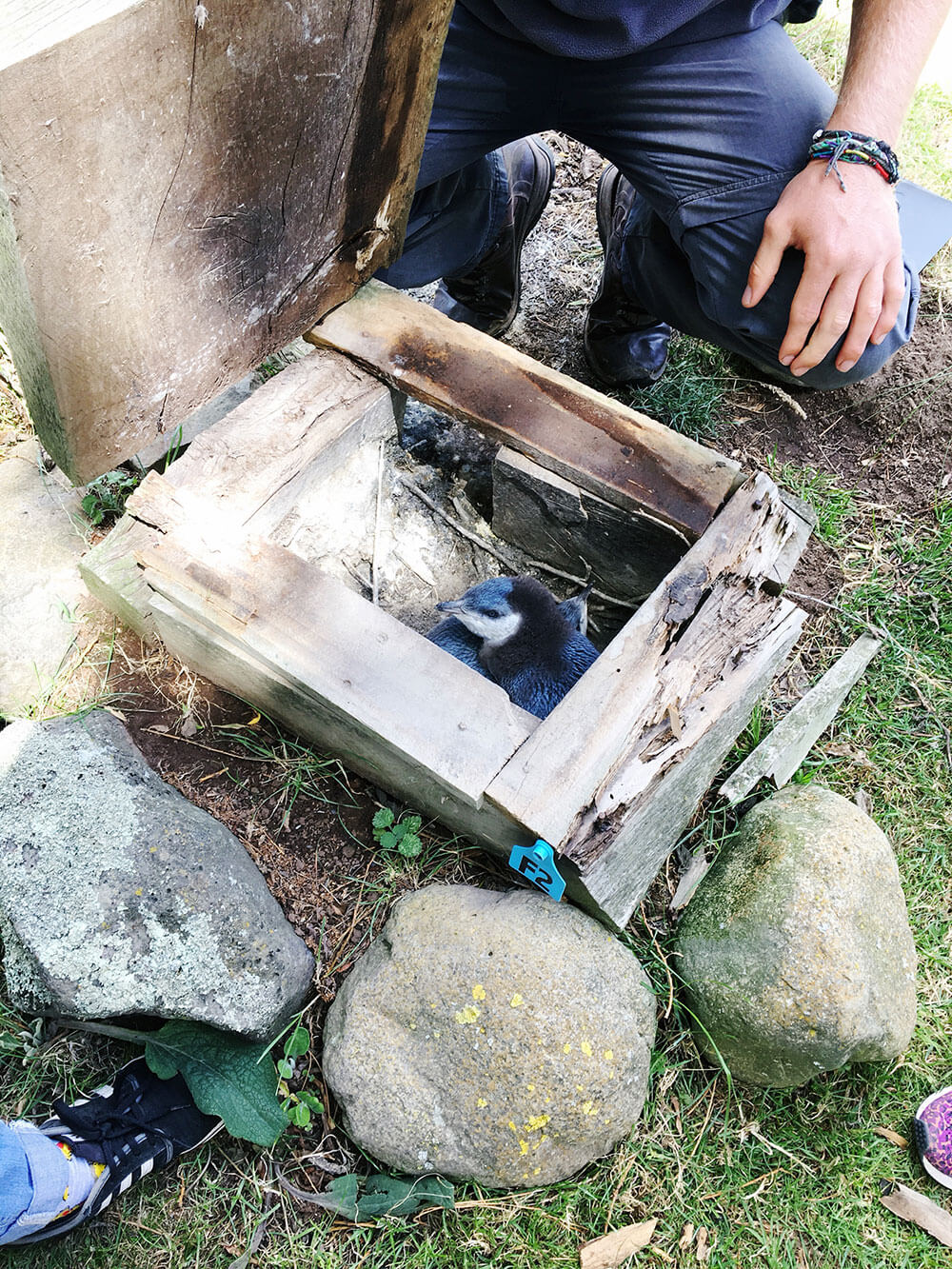 When I first saw the boxes the penguins were staying in, I was a bit confused and concerned. It didn’t look like a natural habitat, and instead like they put these boxes here so they could show off penguins to tourists.

But when he explained them, it made a lot of sense.

During mating season, penguins will go around the colony and begin to dig nests where they’ll lay their eggs. The conservationists then go around during the day looking for nests that penguins have begun to dig. They then dig up the hole for them and put a wooden box in its place, with a lid on top. Then, once the penguin gets back, it sees how awesome it is at building nests and lays its eggs.

The boxes then allow the conservationists to track the penguins in the colony and check on the babies periodically. There are always two babies, and if one starts to get bigger than the other, it means one parent has likely died and is favoring one over the other. They’d prefer to have one strong baby rather than two babies that likely won’t survive, so they only feed one.

In those cases, they take the smaller baby out of the nest and bring it to their infirmary, where they’ll feed it until it’s large and healthy enough to go out to sea on its own.

Once we saw a couple of the penguin nests, we walked over to one of the blinds and got to see some young seals hanging out in the sun. 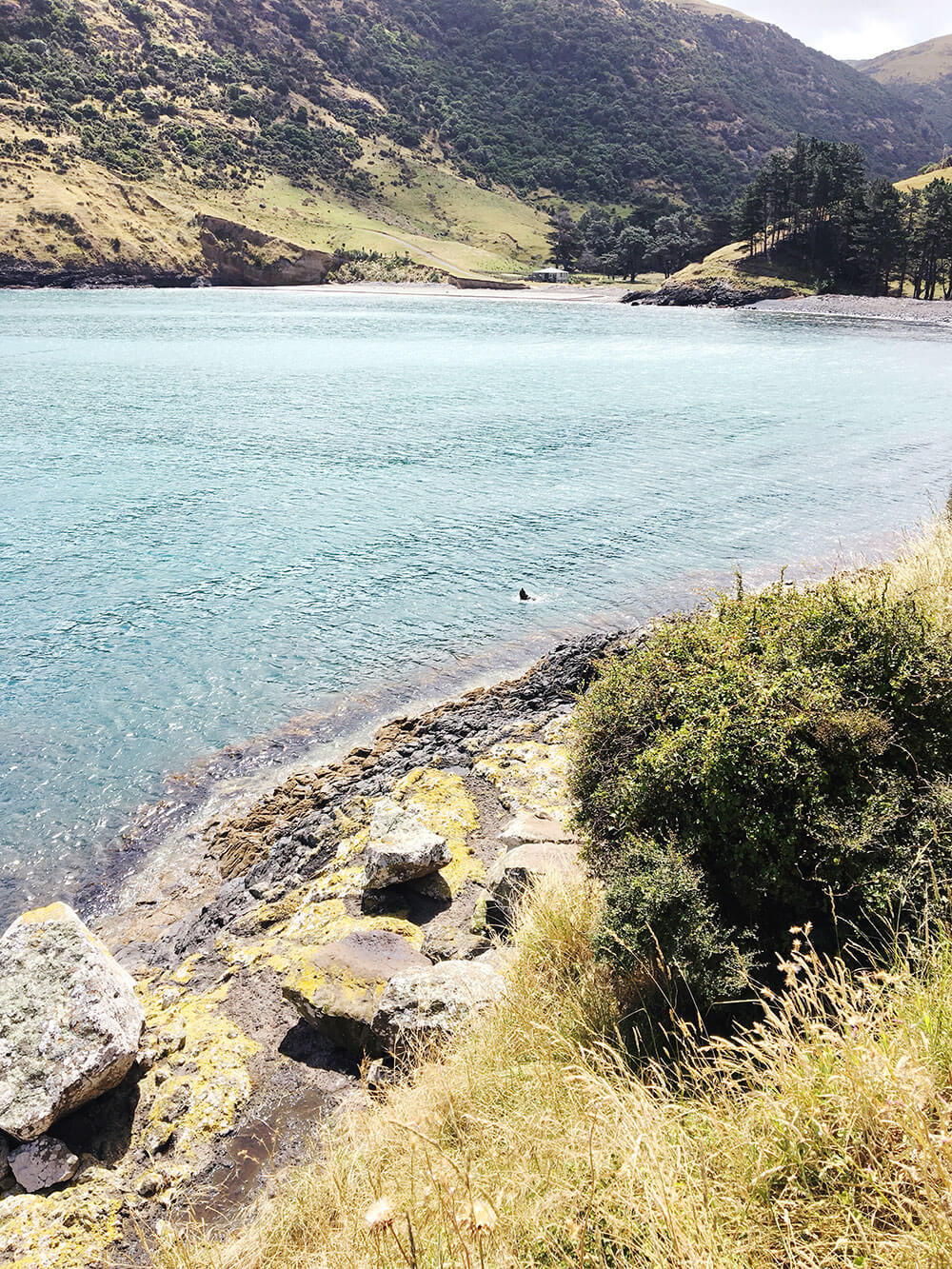 Can I move to New Zealand yet?

This tour was absolutely our favorite tour that we did while in New Zealand, and I can’t recommend it highly enough. They’re truly doing amazing work. Over the last 10 years, after a long period of steady decline, they’ve been able to double the penguin population in Flea Bay. And amazingly, they’re a team of only 7 people.

When Sean and I move to New Zealand (more on that later), we’ll definitely be visiting Pohatu Penguins again. If we hadn’t done a cruise, we absolutely would have stayed overnight, so we’re adding that to our list of things to do when we go back.

If you’re visiting New Zealand, please visit Akaroa and go on a tour with Pohatu Penguins! You won’t regret it.