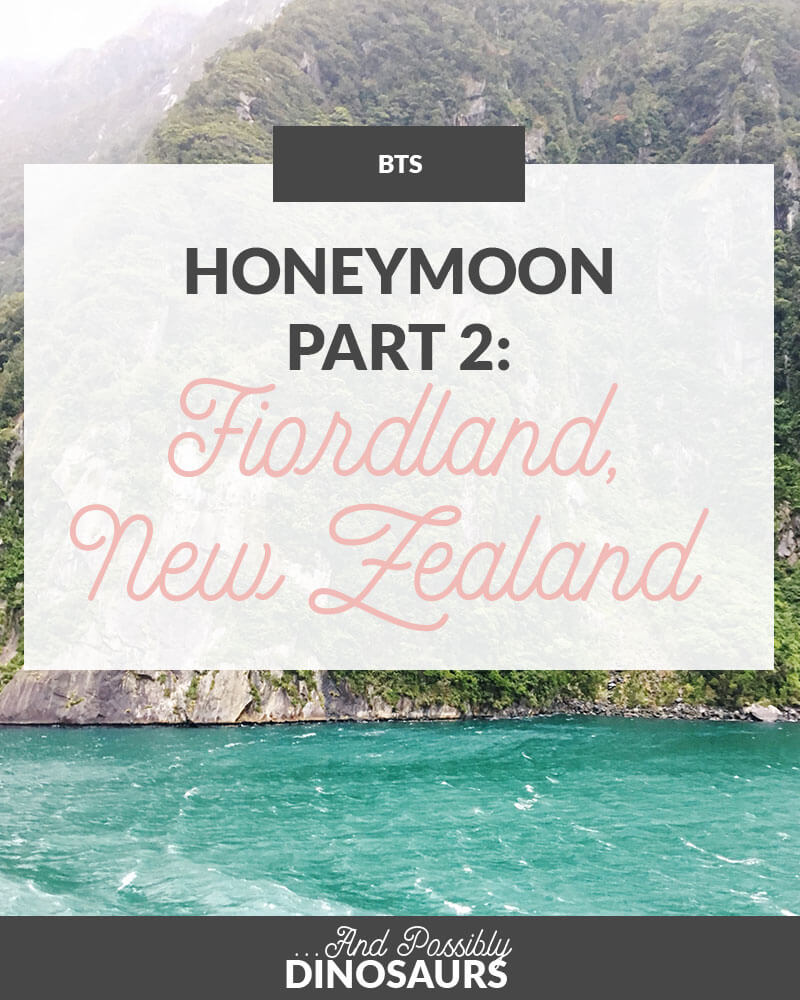 It’s time for the second part of my honeymoon recap: Fiordland, New Zealand!

We woke up on Christmas morning to a foggy, rainy view of Milford Sound, which is on New Zealand’s southwest coast. It’s part of Fiordland, which is New Zealand’s largest national park. It’s an absolutely beautiful area with mountains, lakes, and glacier-carved valleys, which are now flooded with ocean water. 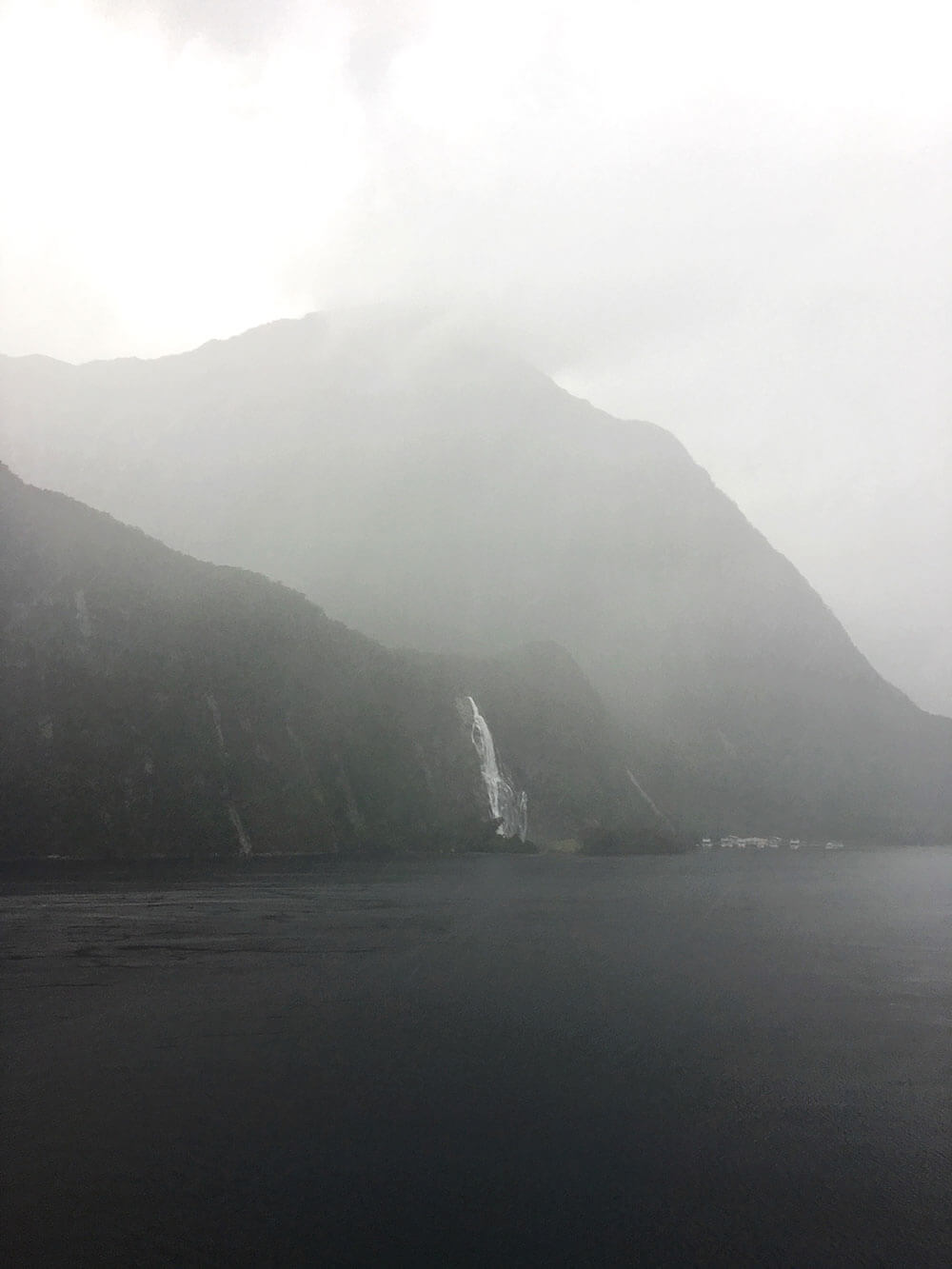 Because we were sailing over Christmas day, when most shops and restaurants would be closed, it was the perfect time to explore Fiordland. We didn’t disembark because of how steep the cliffs are (in fact, much of Fiordland is inaccessible, which means it’s been largely untouched by industry), which made the day relaxing.

This is one of the main reasons we got a balcony room on our ship (as opposed to an inner room with no windows, or a room with a small porthole or a window that doesn’t open). We knew we’d be spending a whole day in Fiordland, and wanted the ability to view the sites and take photos without having to fight people for the best spot on the deck.

And we’re glad we did! It was cold and rainy that morning, so no one wanted to go out on the decks. We went up to the cafeteria for some breakfast and it was packed. All of the seats by windows were taken, and even then you could barely see out them from all of the water that collected on the outside. We ventured out to the uncovered seating area to take a few quick photos, then headed back to our room to enjoy the views from the covered balcony. 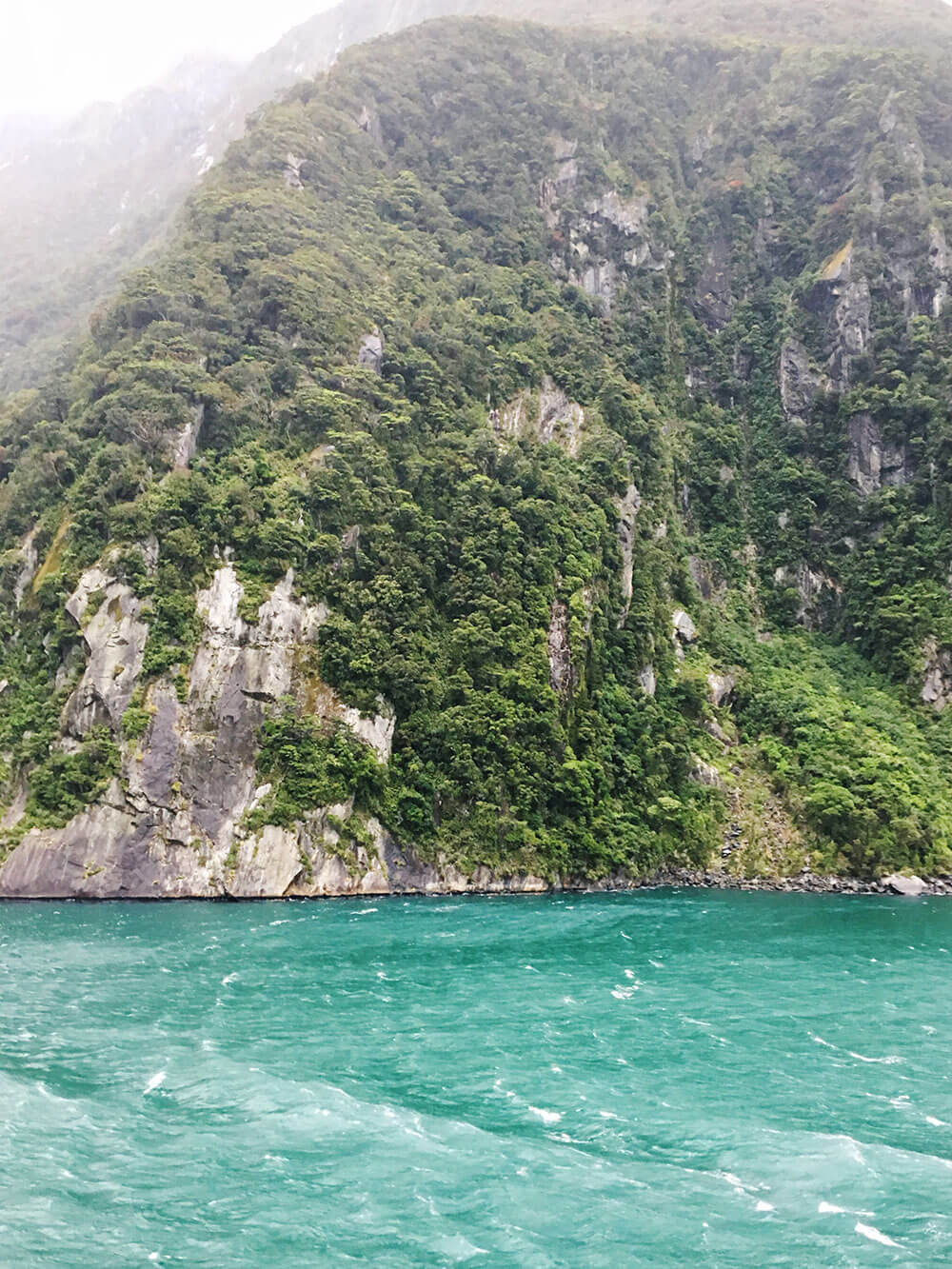 Apparently we were lucky to be able to enter Milford Sound at all; it’s relatively common for cruise ships to make it to Fiordland and not enter Milford Sound due to rain or wind. The weather that day was probably right under that threshold, because it was quite windy.

For example, here’s a waterfall (there were so many of them because of the rain!) that barely even made it to the water because the wind was turning it into vapor as soon as it left the cliff face. 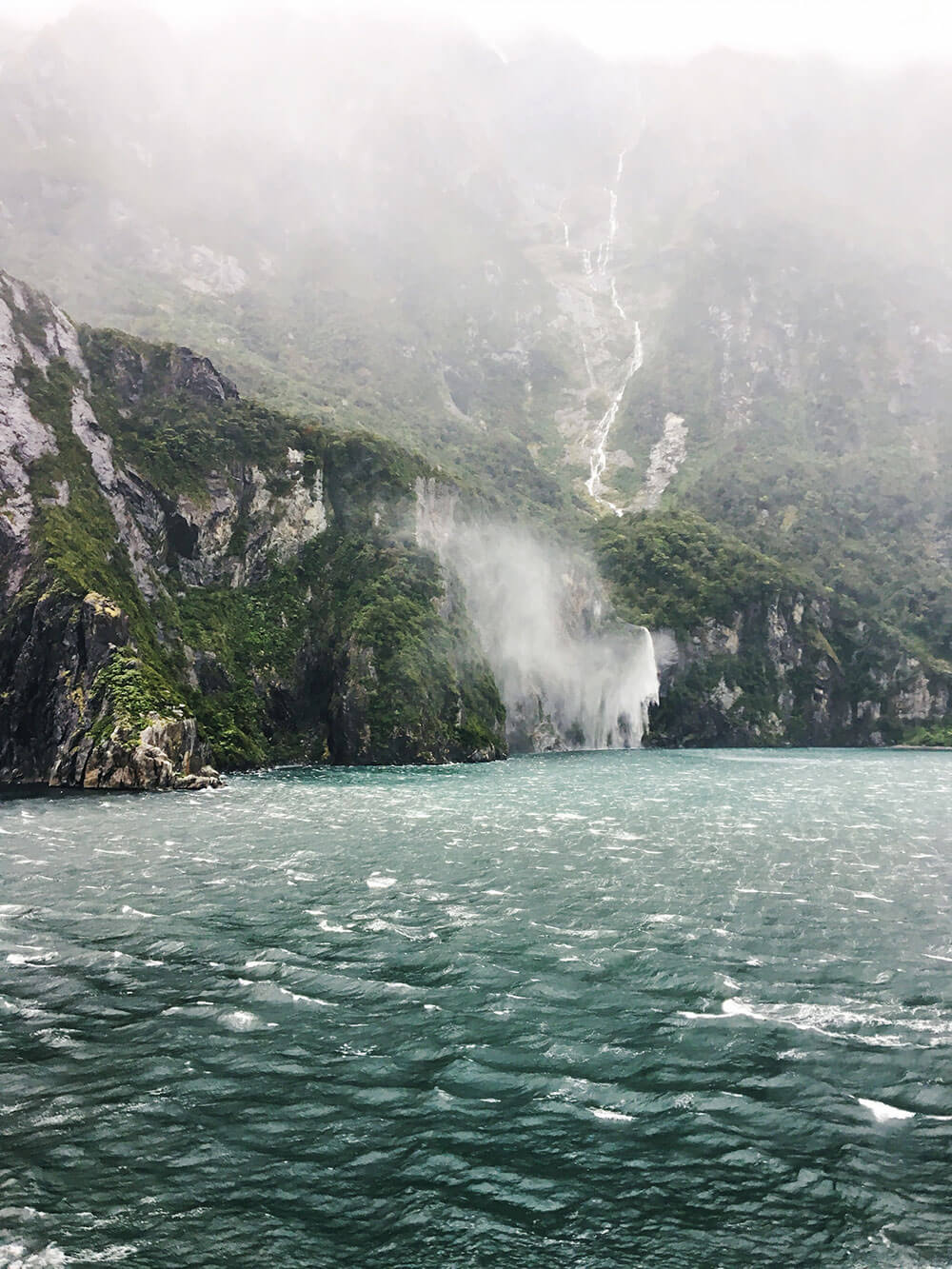 The rain was clearing up by the time we were leaving Milford Sound. We were a little bummed by all of the rain, because on sunnier days you can see seals, penguins, dolphins, and even humpback whales! But with the crazy weather, we didn’t see any wildlife.

After Milford Sound, we headed to Doubtful Sound. The sun was out by that point, so we headed up to the helipad for all-around views (our balcony only had views of one side of the sounds). While the sun was out, it was still really windy, especially once we rounded a corner and got a big, continuous gust of ocean wind.

I didn’t take any photos in Doubtful Sound, mostly because I was terrified of dropping my phone in the water. But believe me, it was beautiful.

Later in the afternoon we went to the third and final fiord on our itinerary, Dusky Sound.

We spent a lot of time on the deck for this one, and since the wind died down, it was much warmer. I was even able to wear jeans and a short-sleeved t-shirt for part of it!

Dusky Sound has a memory that I’ll probably never live down. At one point, Sean went to the bar to get us drinks. Immediately afterward a waiter came by asking if I needed anything and I said no. About 5 minutes later, while Sean was still waiting at the bar, a pod of dolphins went by the ship. Sean was too far away to call over (though I probably could have gone to get him if we’re being honest with ourselves), so he 1000% missed them.

I don’t think he really forgave me until we saw dolphins later in the trip. 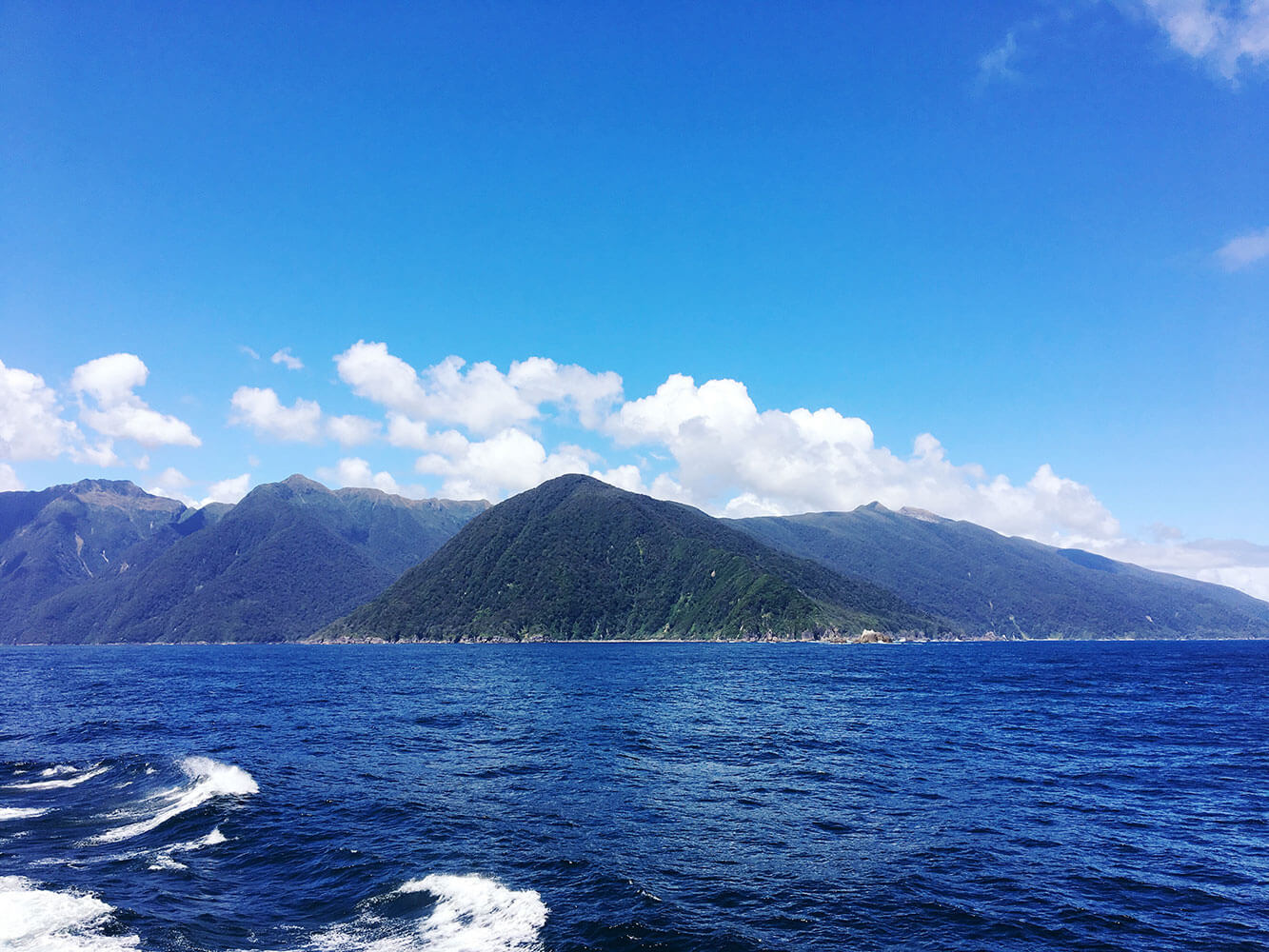 Fiordland was absolutely beautiful, and definitely a unique way to spend Christmas. We loved it! The views were amazing. We wanted to take a photo basically every five seconds because everything was stunning. 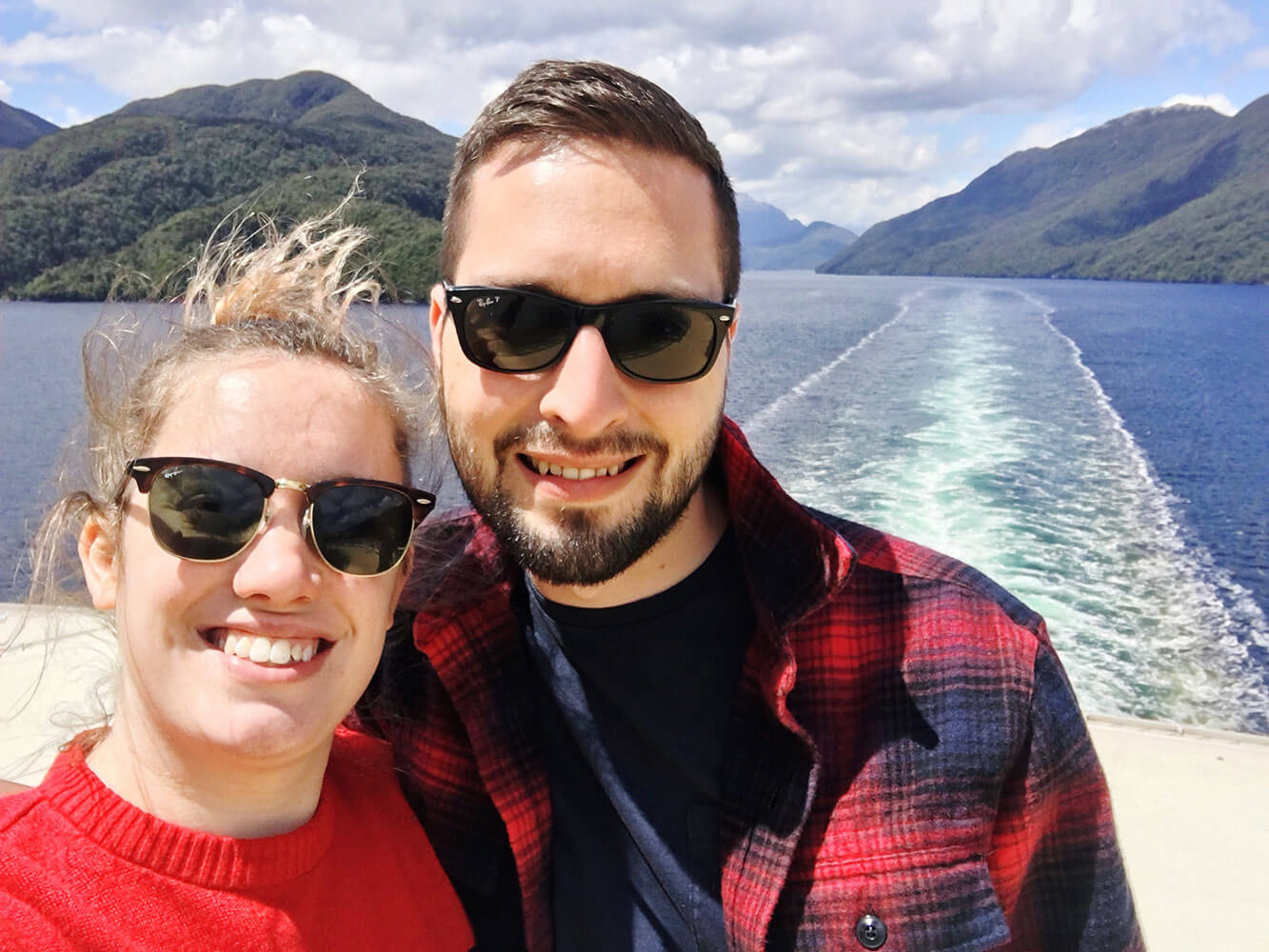 Sean & I in Dusky Sound

While Fiordland is largely inaccessible (only Milford Sound has road access), we highly recommended visiting. If you’re deciding between a cruise with a stop in Fiordland vs. a cruise without one, go to Fiordland! And get a balcony room if you can! It’s the best way to see the Sounds if you’re caught in the rain.