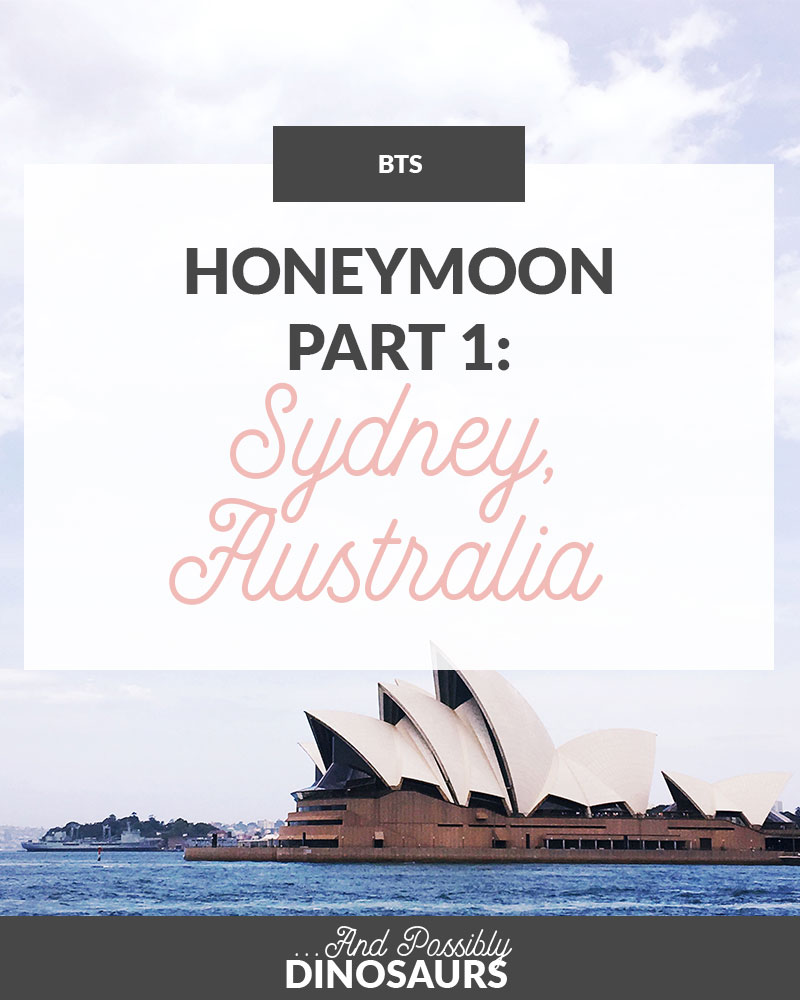 For the past 3 weeks, Sean and I have been adventuring around the South Pacific for our honeymoon! We’ve always wanted to move to New Zealand (in a haha-but-no-really kind of way), and we knew our honeymoon would be the perfect opportunity to visit it (yes, we wanted to move there before we even visited, and no, it isn’t weird).

We ended up booking a holiday cruise and got to see a lot of New Zealand, plus Sydney, Australia! Since there were so many amazing places and experiences, I decided to chop it up into smaller blog posts, like I did with the Mediterranean Cruise we went on in 2014.

After more than 24 hours of travel and about 21 hours on a plane (ouch), we arrived in Sydney, where it was a balmy 97 and humid (although I suppose I can’t complain too much since we left before this). We were planning on taking the train to Circular Quay and walking the remaining kilometer to our hotel, but we decided to dish out for a taxi instead.

We stayed at Pier One Sydney Harbour Hotel, which I had seen recommended on What Olivia Did (and I could use credit card points on it!), and it was amazing. It’s right next to the Sydney Harbour Bridge, and right around the corner from the Sydney Opera House. 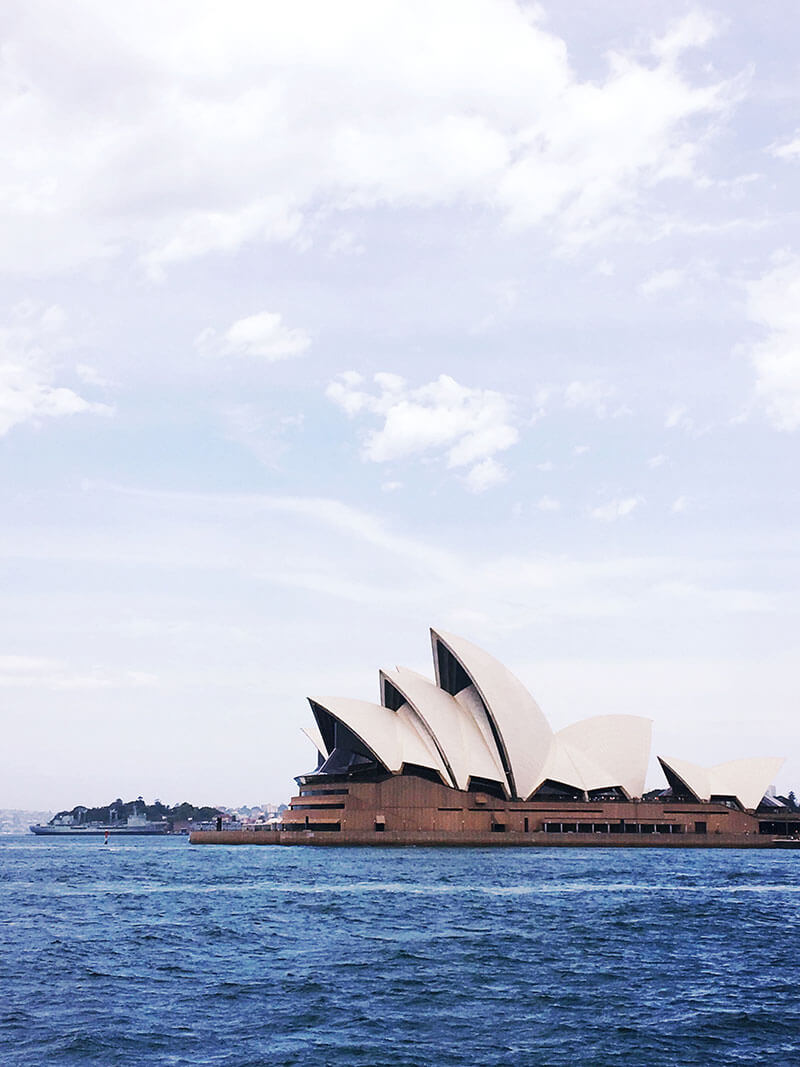 After showering and napping, we grabbed a bite at the restaurant on the ground level of the hotel. It rained a little bit, but we were able to sit under a big umbrella right on the pier, so it was worth it!

The next morning, we woke up early (jet lag, womp) and got breakfast at the most adorable (and delicious!) place, Creperie Suzette. 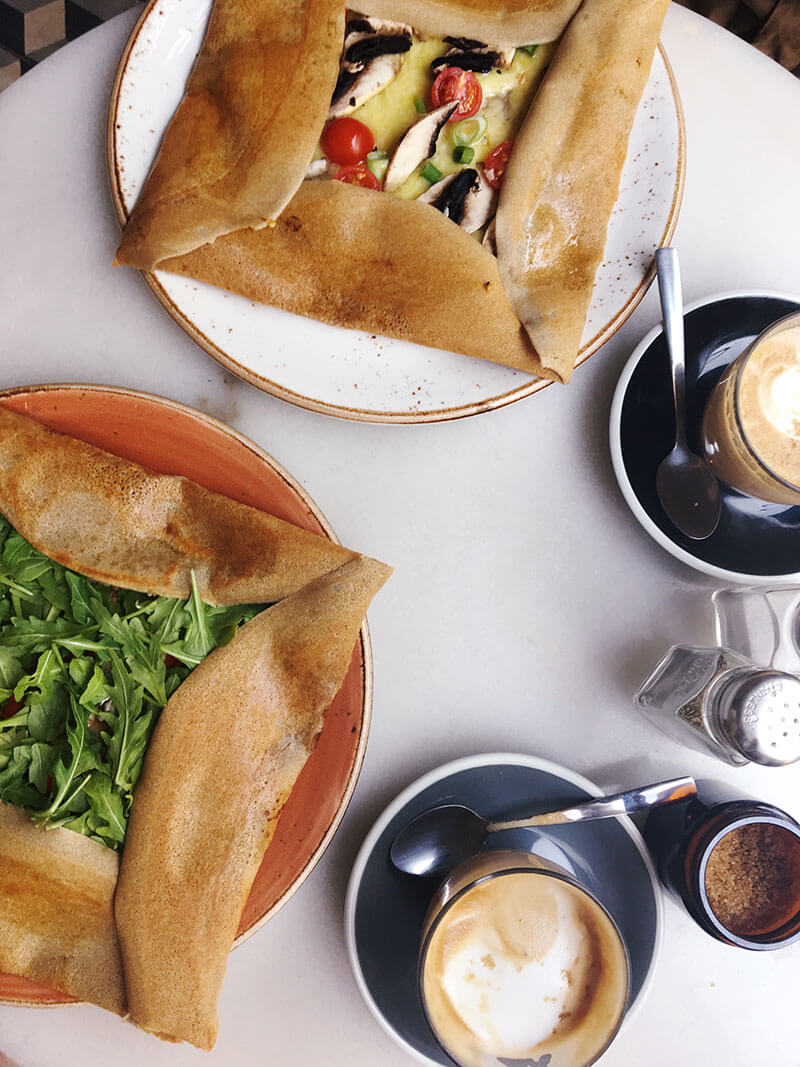 The food was amazing, and the latte art had animals on it! #goals 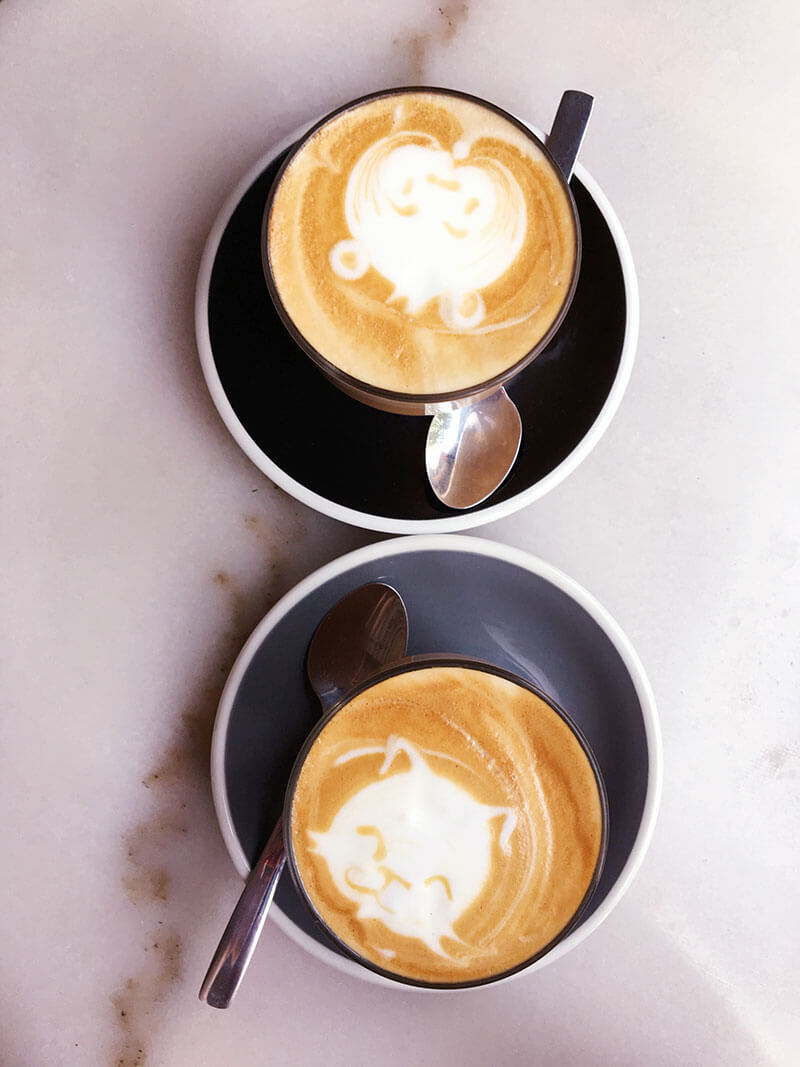 At 10 we had a walking tour reservation with Urban Adventures called Sydney With Conviction that we loved. It was mostly around the Rocks (where we’d been staying), and it was really interesting. We learned about the city’s history as a penal colony and the riff-raff that came after. It felt like the Sydney you wouldn’t necessarily hear about in most tours.

The tour ended outside of the Opera House, so we walked up and took some photos in front of it. It’s interesting that the roof goes close to the ground in some places. When you get that close up, you notice it’s actually got a tile pattern all over it. We weren’t able to go inside but we still loved seeing it from the outside! 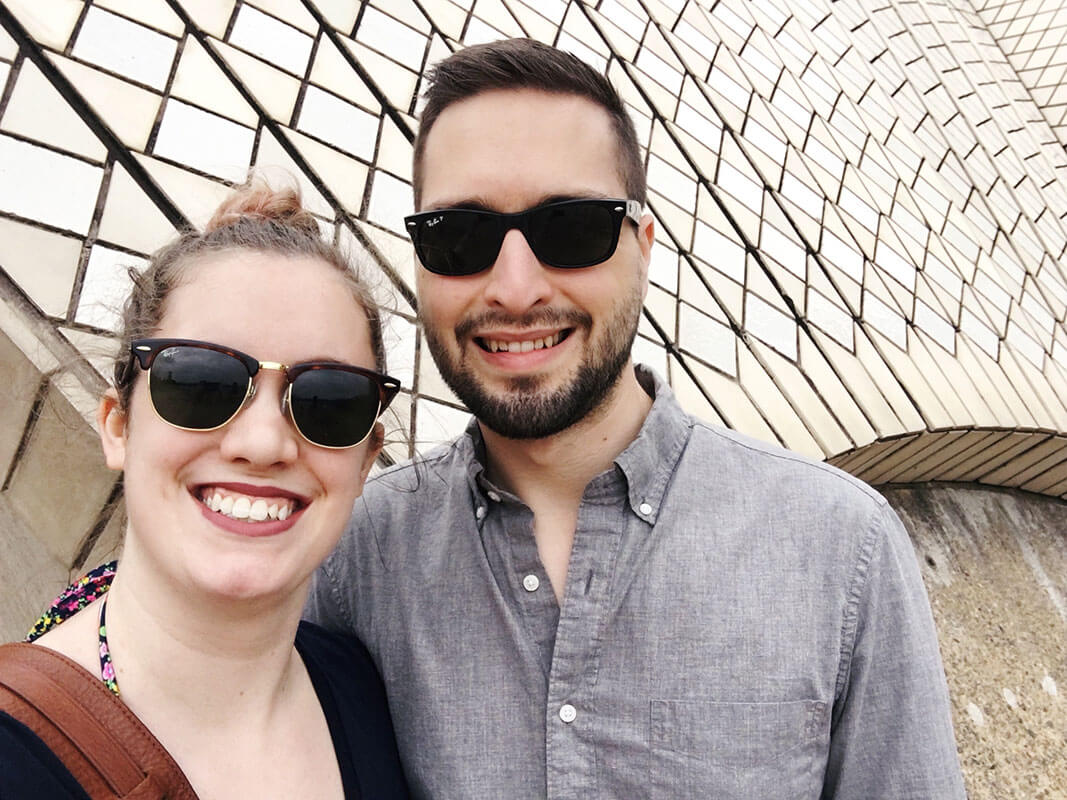 For lunch, we hit up Burger Project, which was delicious, and finished it off with some gelato (even though we were not hungry any more). Afterward we hit up Lord Nelson Brewery Hotel, which is supposedly Australia’s oldest hotel and pub (though a lot of places say that). One thing we learned: pints in America are small compared to Australian pints, and we prefer the Australian ones a lot more. 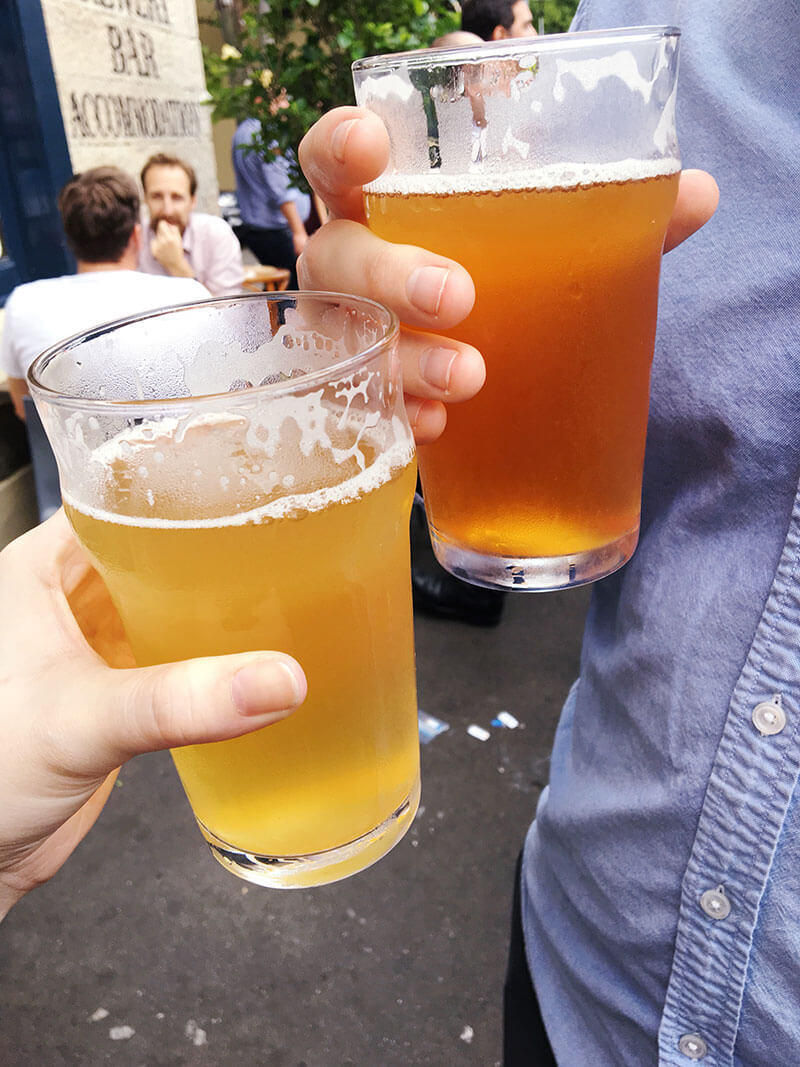 For dinner, we looked into a few different restaurants in Sydney. We quickly discovered how expensive dinner in Sydney can be. Any place with a view of the Opera House was $180+ per person. And they’re the type of places where you don’t get to choose what you eat; the chef tells you what you’re having.

We ended up going to an Italian restaurant right around the corner. It would have had a beautiful view of the Opera House if the Port Authority building weren’t in the way. The food was delicious, and we were able to get tiramisu for dessert. Any meal that ends with tiramisu is a good meal.

The next morning we were up early again, so we went to the local 24-hour pancake place, Pancakes on the Rocks. I got some Nutella pancakes and they were so good (but very sugary). All of the pancakes there come with a scoop of ice cream, if that tells you anything. 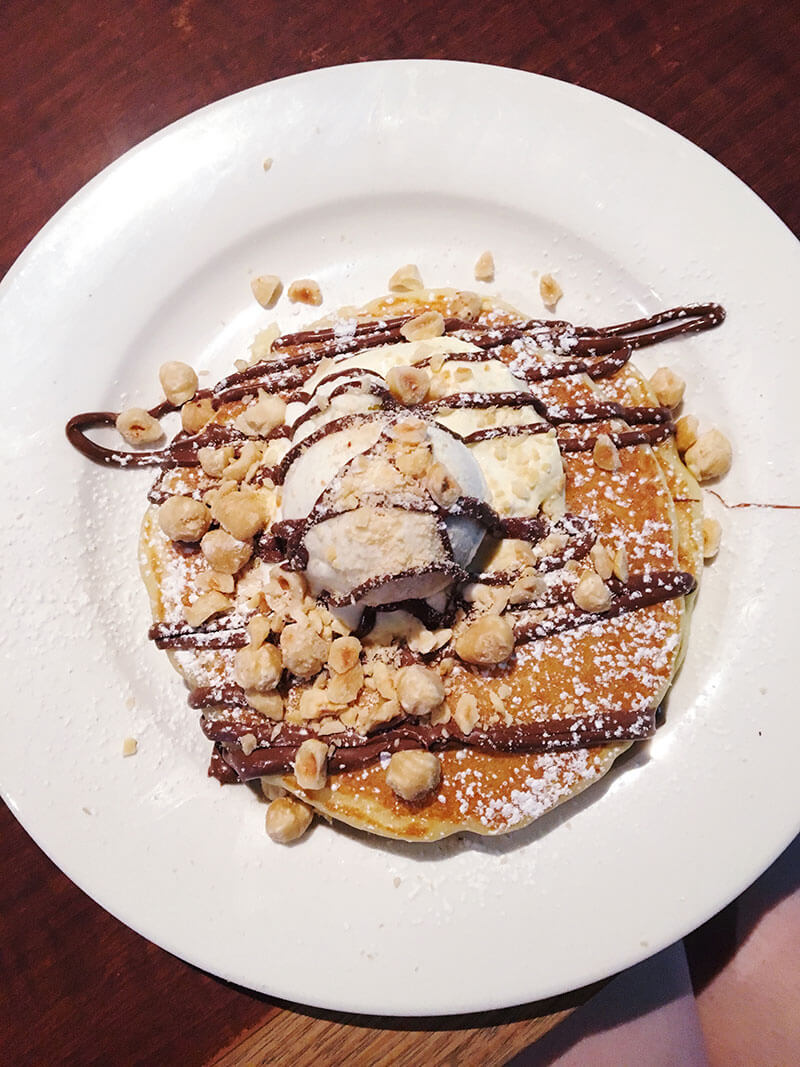 Pancakes on the Rocks

Afterward, we walked around and hit up a few shops before jumping on the cruise ship!

Once we got back from New Zealand, we had a few hours before we needed to be at the airport, so we dropped off our bags and had them transferred to the airport (best $75 we’ve ever spent) and did the Bondi to Coogee Beach Walk, which was beautiful. 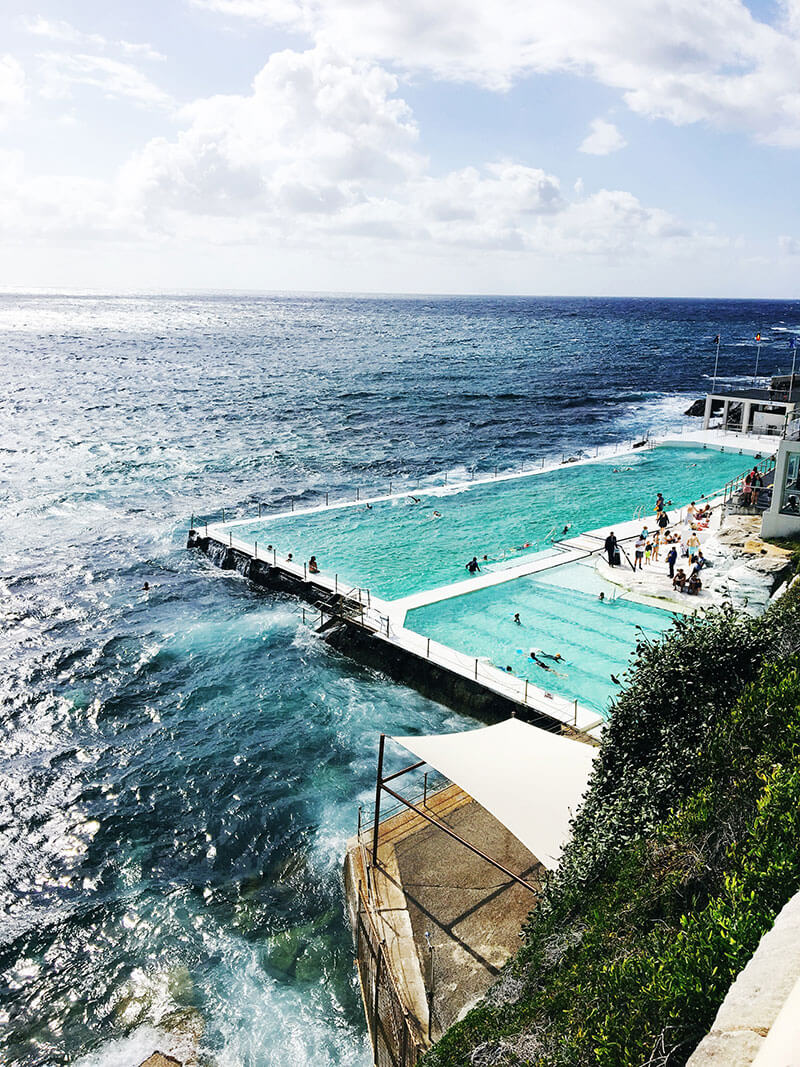 It was quite windy and a little rainy, but there was no way we could complain about these views.

We unfortunately didn’t get to swim, since we were getting on a plane that evening. But one thing we both loved were all of the public baths on most of the beaches. They’re basically man-made pools added to the side of the beach, which makes the dangerous, rocky parts of the surf more accessible. The pools are filled with sea water and waves crash over the edges, which seemed like a lot of fun.

When we move to New Zealand, we’ll definitely take a trip back to Sydney. This time, we’ll do the beach walk and swim at all of the beaches along the way.

So there you have it, our short trip in Sydney, Australia! There was a lot of eating and napping, but the food was glorious and the sleep was much needed after all of the crazy travel.