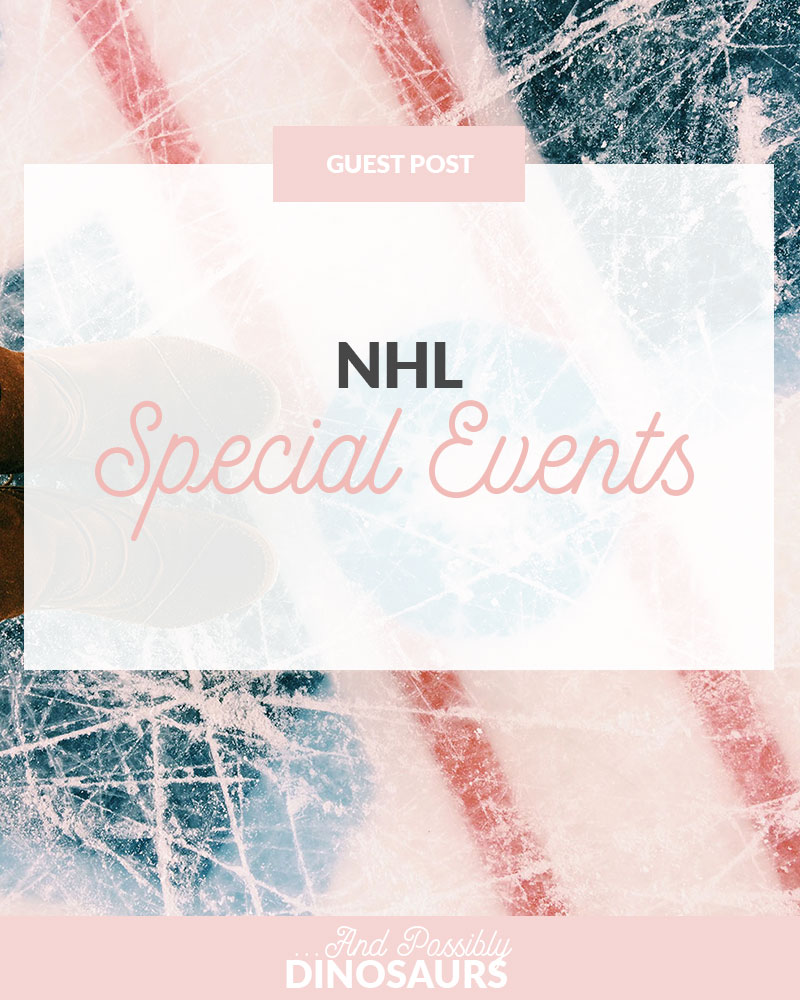 I’m so excited to introduce the newest guest blogger on And Possibly Dinosaurs: Ashley from Under the Ash Tree!

She lives in NYC and works at the NHL (#dreamjob), so I invited her to write about the fun NHL special events she gets to go to.

I seriously cannot contain my jealousy of her life.

This weekend is Hockey Weekend Across America, so what better of a time to talk about hockey? (Plus, did you hear the Miracle on Ice team is reuniting in Lake Placid on Sunday?)

Hey Guys! I’m Ashley, I write at Under The Ash Tree and I, like Caitlin, am a huge hockey fan (Let’s Go Rangers!). Caitlin and I actually share a similar hockey background—both of us didn’t grow up watching hockey but were converted by our boyfriends for the better!

I live in New York, and in college I was able to intern with the NHL and was offered a job there shortly after. Today I’m here to tell you a bit about a big portion of my job: NHL special events.

When most people think about hockey, they think of kids skating around on a pond.  It’s an image that at one point was even on the Canadian five dollar bill!  That concept inspired the NHL to create a few different events that featured NHL teams playing on NHL ice, but outdoors at some of the best stadiums in the country.

The Winter Classic is the premiere event of the NHL.  It was created in Buffalo, New York in 2008 and is played each year on New Year’s Day.  It’s by far the most watched regular season NHL game and has lead to some of the most memorable moments in NHL history.

In 2014, the Detroit Red Wings faced off against the Toronto Maple Leafs at the University of Michigan’s Big House. This game has probably become the most famous of the Winter Classics.  Over 100,000 fans (including Caitlin!) got to watch hockey on a beautiful, snow-filled, freezing cold, and awesome afternoon. 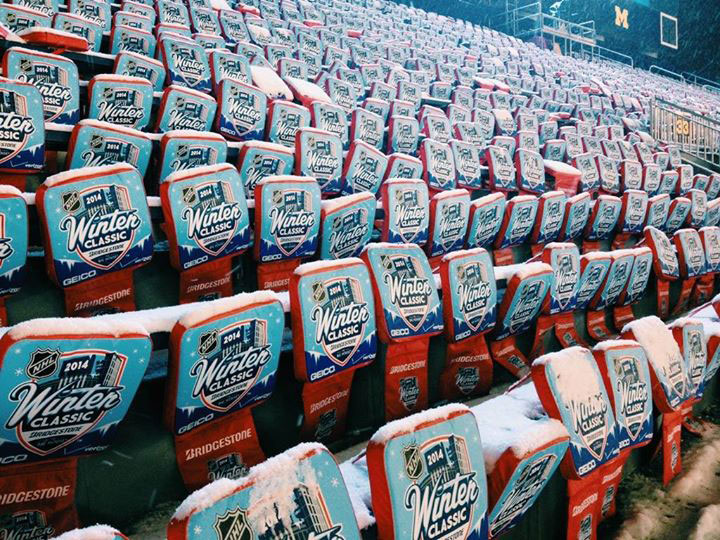 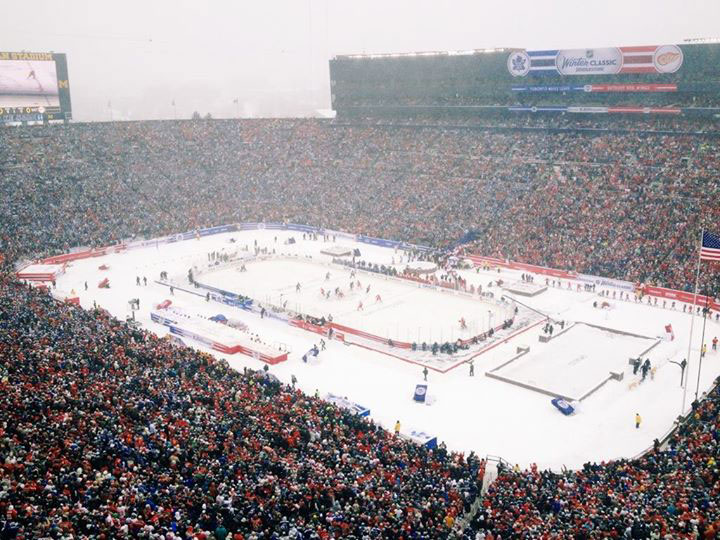 This past New Year, the Winter Classic was held in Washington DC where the hometown team– the Capitals– and the visitors– Chicago Blackhawks–faced off in one of the most star studded outdoor games yet. Unlike many of the previous years, the sky was clear and the weather almost warm, which lead to some seriously good hockey. 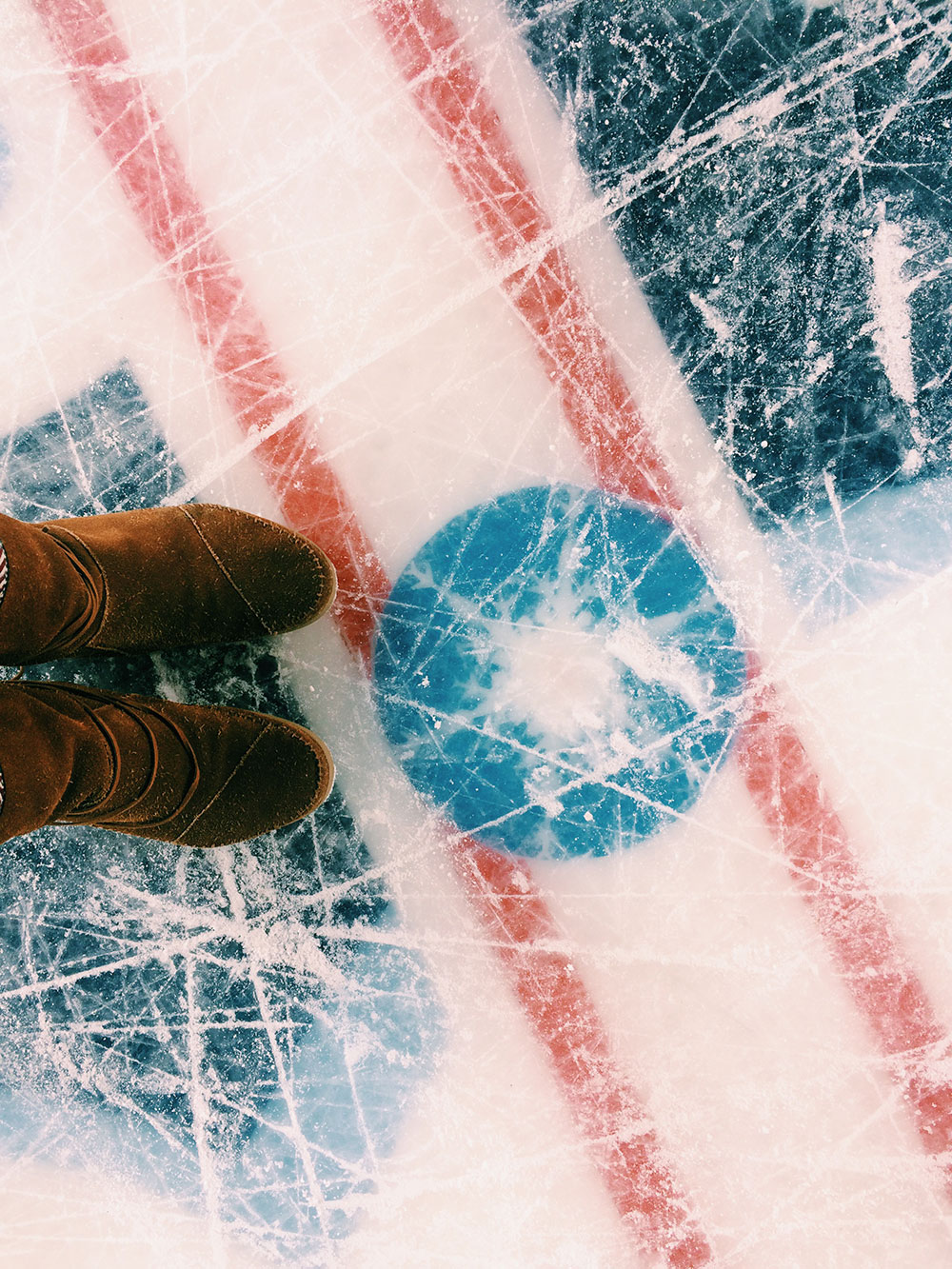 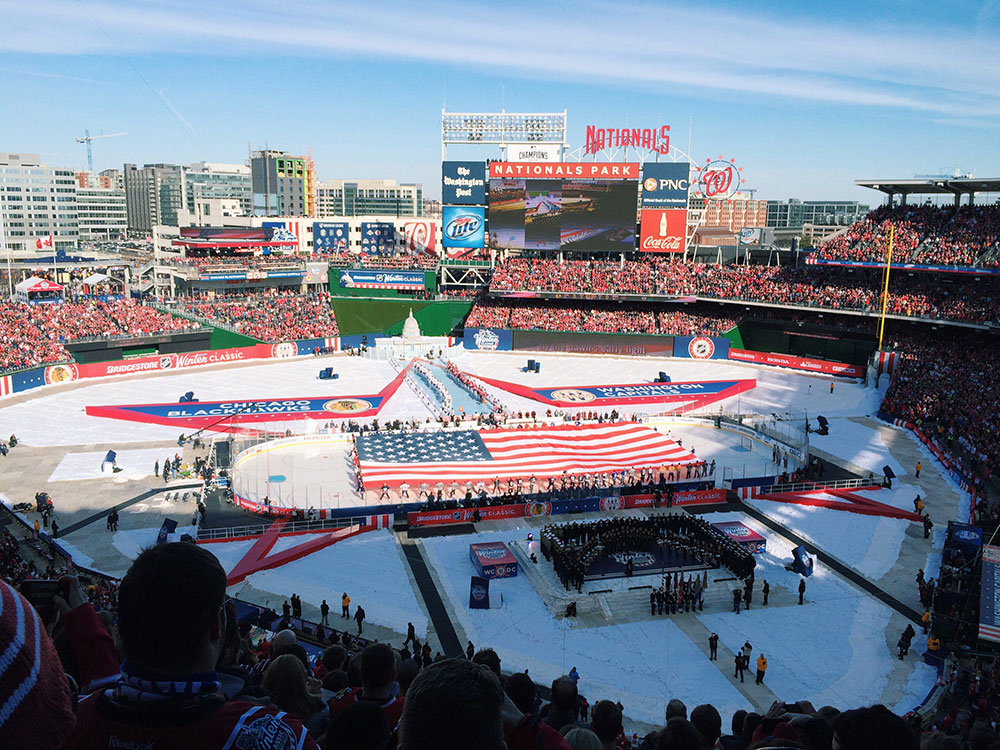 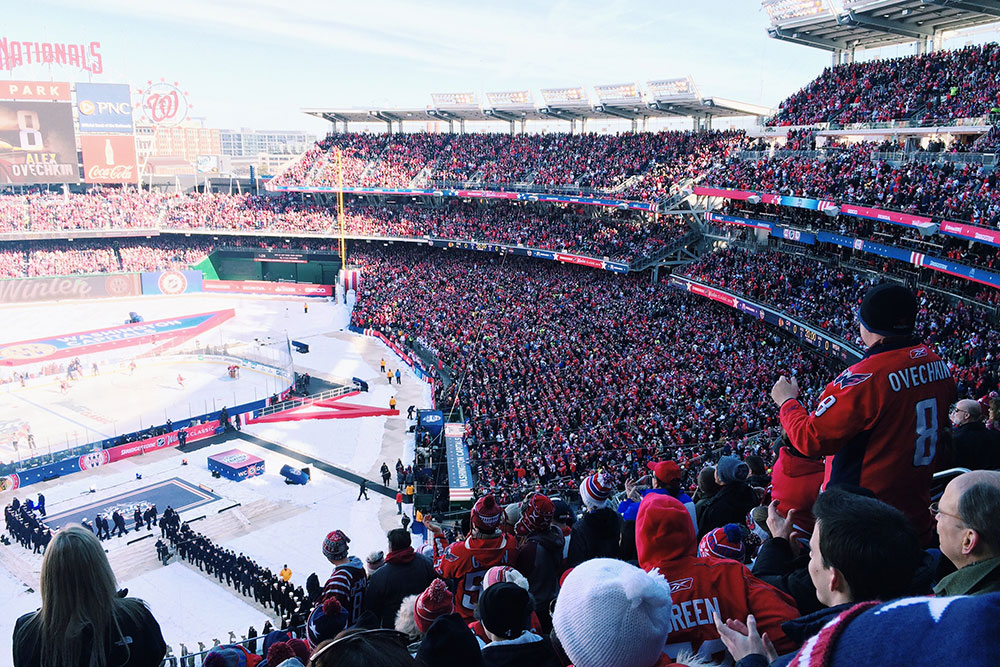 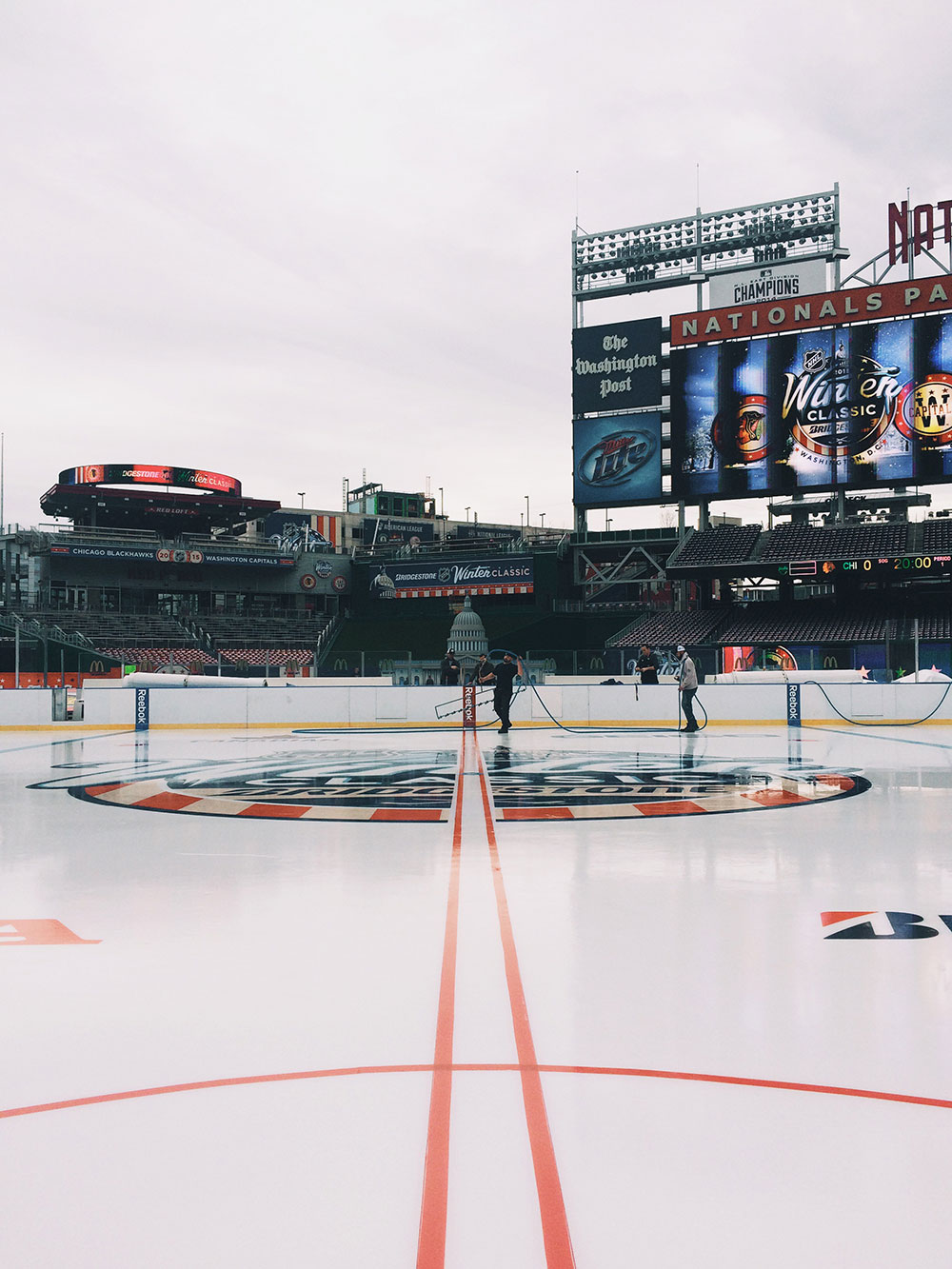 Next year, the Montreal Canadiens will be shipping down to Boston to face their biggest rivals, the Bruins, at Gillette Stadium.  This historic rivalry in that famous arena is sure to make the 2016 Winter Classic an event to remember.

Due to the success of the Winter Classic, the call for more outdoor games was louder than ever, and the League answered.

In 2014, the Coors Light Stadium Series burst onto the scene with four outdoor games: two at New York’s famous Yankee Stadium, one at the historic Soldier Field in Chicago, and one revolutionary game in Los Angeles at Dodgers Stadium—proving that warm weather would not stop outdoor hockey. 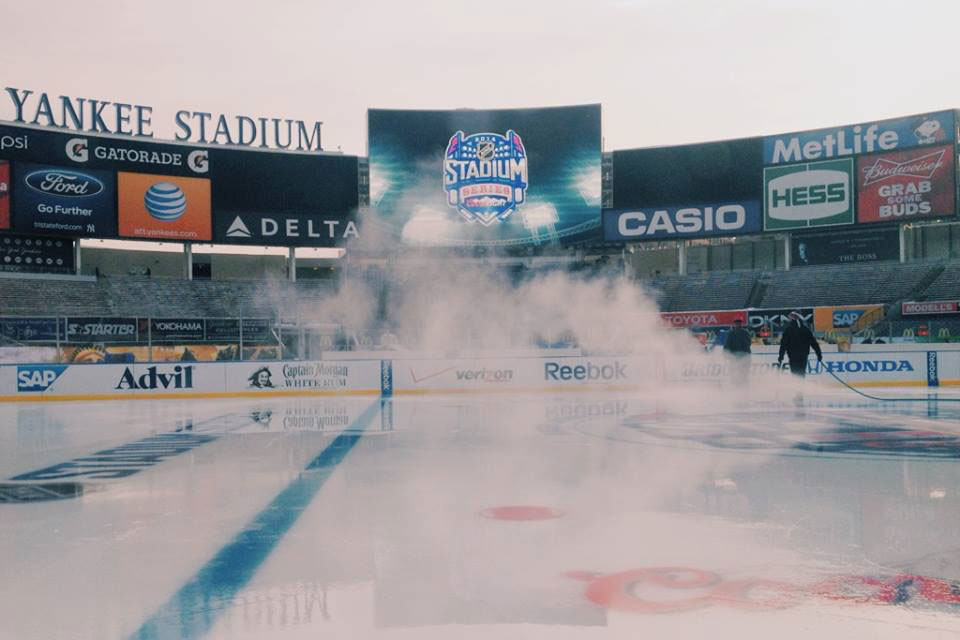 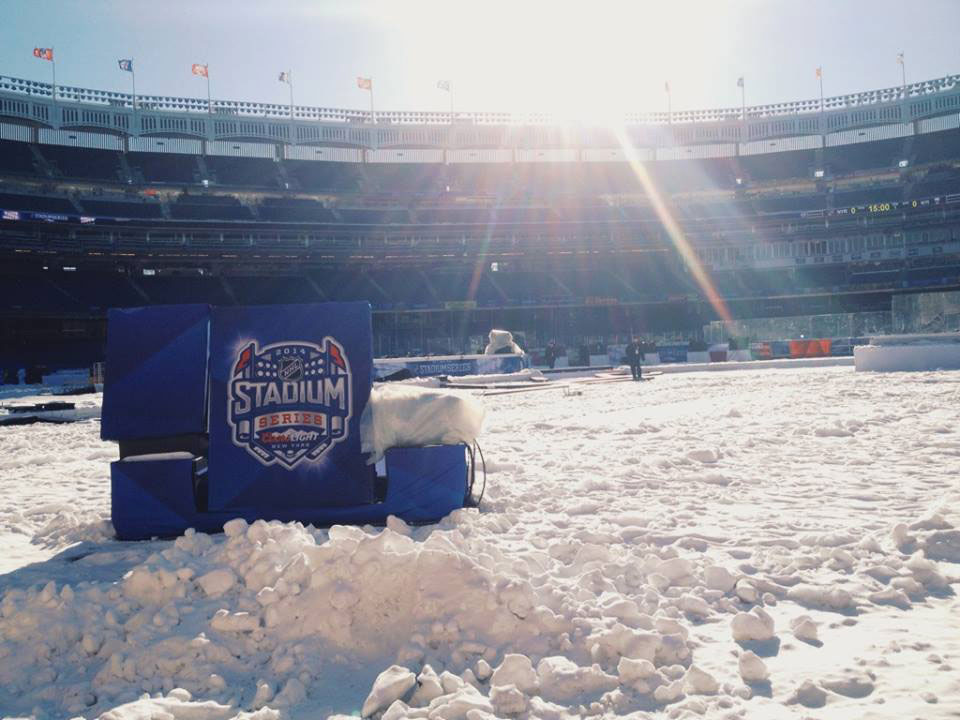 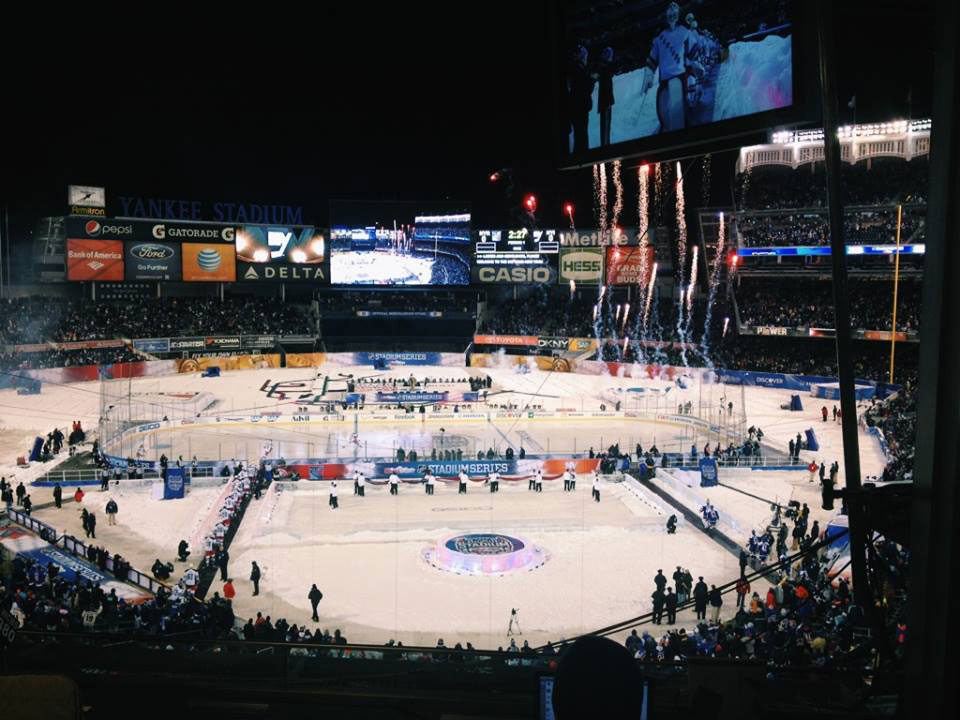 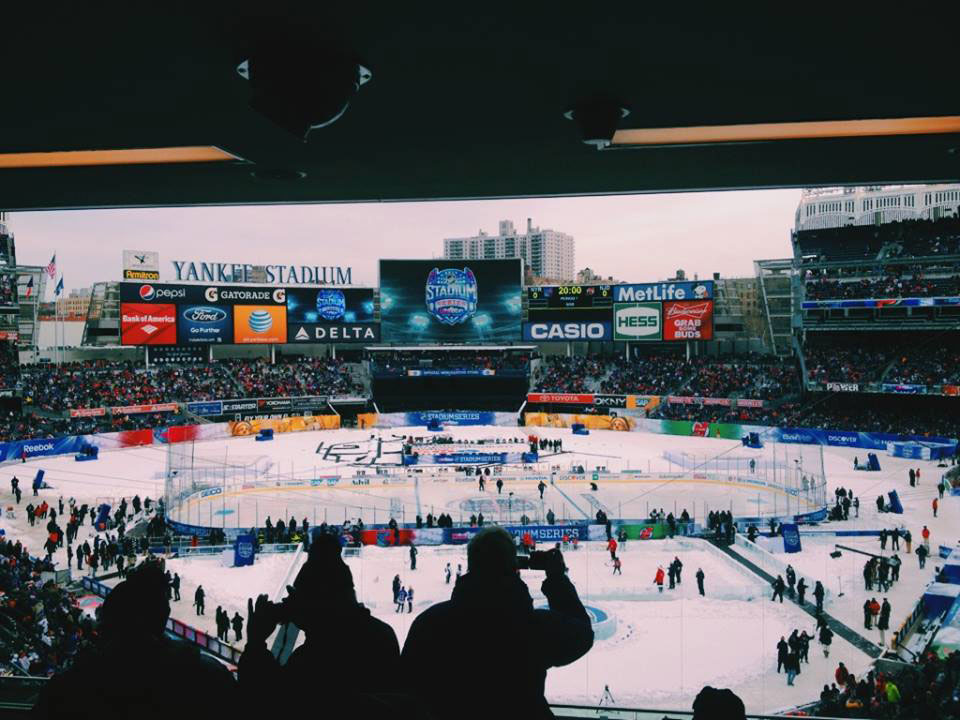 This Saturday, February 21, the Stadium Series continues—this time with only one game in Santa Clara, California where the Los Angeles Kings will take on the San Jose Sharks. I’m sure it will be just as magical.

Like most sports, the All-Star Game brings the best players of each team to one city to celebrate hockey, and it’s truly a spectacular weekend!

Before the weekend, team captains are chosen—usually one from the host city and one chosen by the league—as well as a few assistant captains.  The first event to take place is the Fantasy Draft, where the captains and assistants flip a coin and pick teams, school-yard style. They go back and forth, have the ability to “trade” players, and the very last person picked receives a brand new car!

Night two is the All-Star Skills Competition, where teams and players face off in relay races, shootout challenges and the hardest shot competition. The team with the most points wins the game!

The final activity is the NHL All-Star Game. It’s always a high scoring, highly amusing affair, where the best players in the world get to play with each other.

This year, the All-Star game came to Columbus, Ohio!  The fans dug it, the players had a great time, and fun was had all the way around. Next year, the All Star Game is heading down south to Nashville, Tennessee and I’m sure it will be a weekend full of fun music and good times. 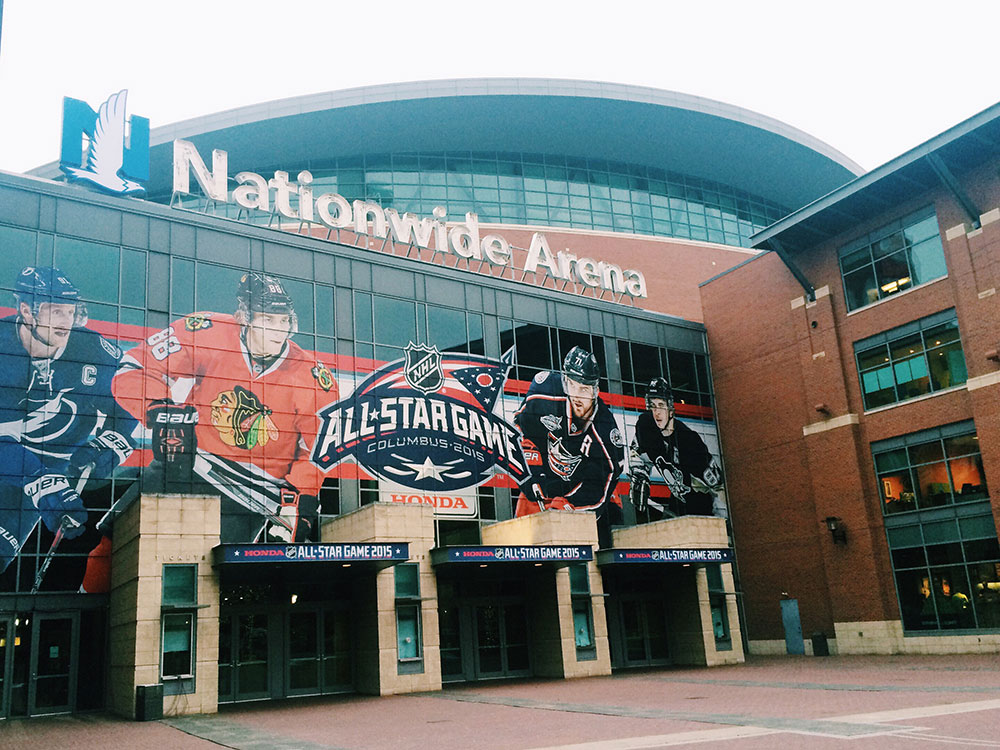 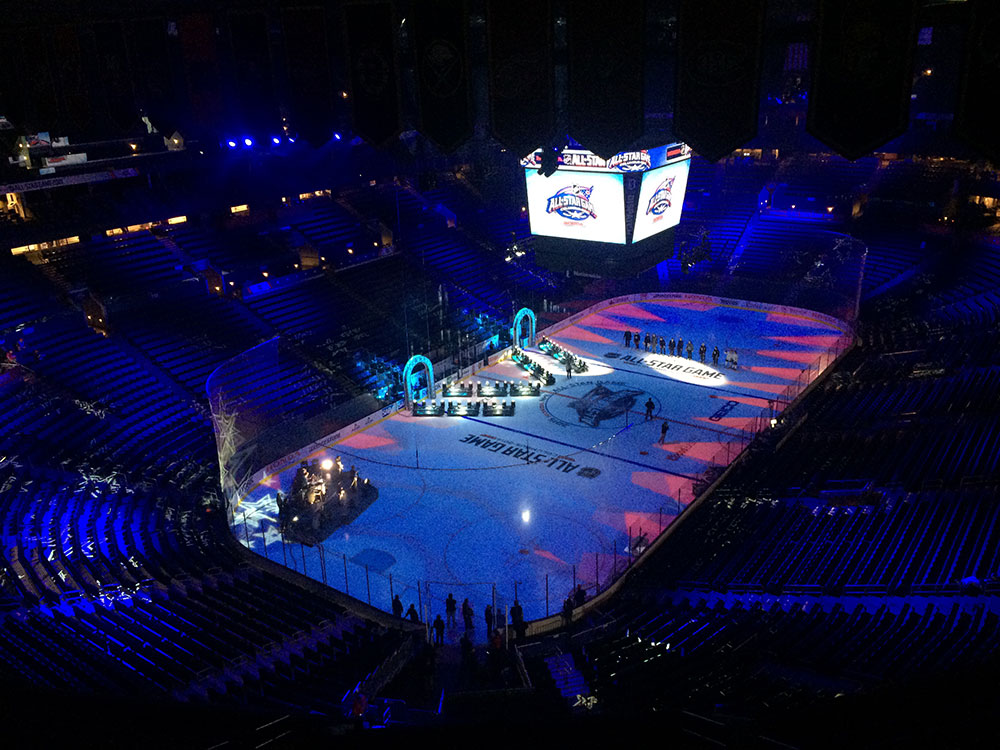 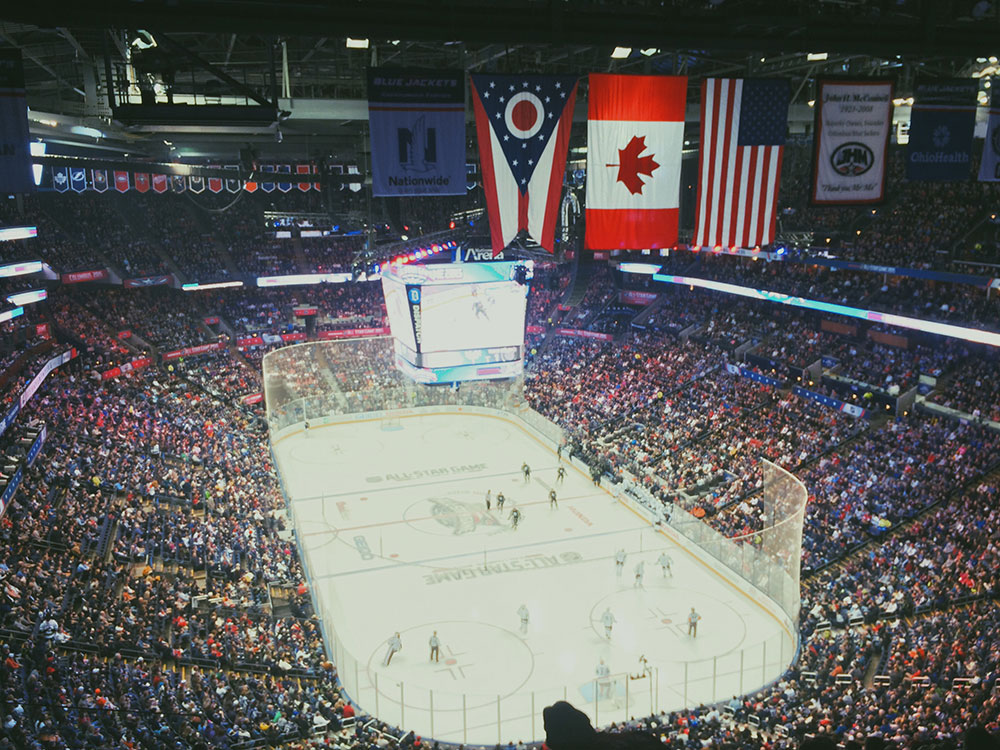 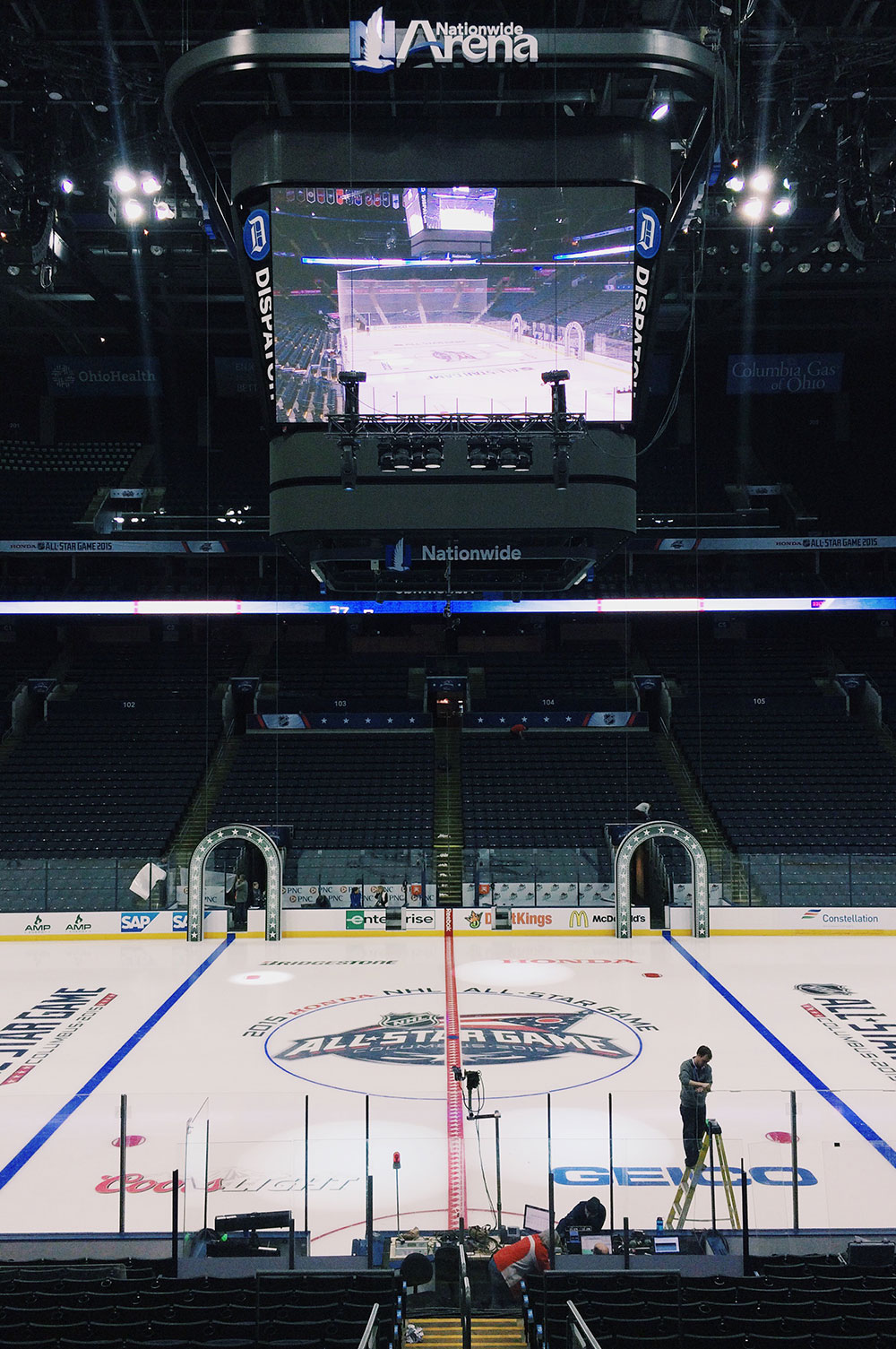 (Caitlin here—I just want to mention that the Detroit Red Wings were the only team not represented in the All-Star Weekend this year, because our goalie Jimmy Howard, who was selected for the event, got injured beforehand. The injustice…)

At the end of the season, after the Cup has been presented and the official “season” is over, the NHL gets all the best players together in Las Vegas to give out the season awards!  The premiere prize is the Hart Trophy for the league MVP—last year it was presented to Pittsburgh Penguins’ Sidney Crosby… but who will it be this year?

The final event of the NHL year is the Draft! Seven rounds, 210 eighteen-year-olds all hoping to be picked!  This year’s draft in Sunrise, Florida is expected to be one of the most important ever with two of the highest rated prospects in history—Connor McDavid & Jack Eichel!  It’s going to be an interesting draft for sure!

There are a few events that don’t take place every year, but that makes them even more special!

The Heritage Classic is an outdoor game in the country where hockey was created—Canada!  It’s always between two Canadian teams and its always one of the most talked about events of the season. The next one isn’t scheduled until 2016 in Winnipeg. 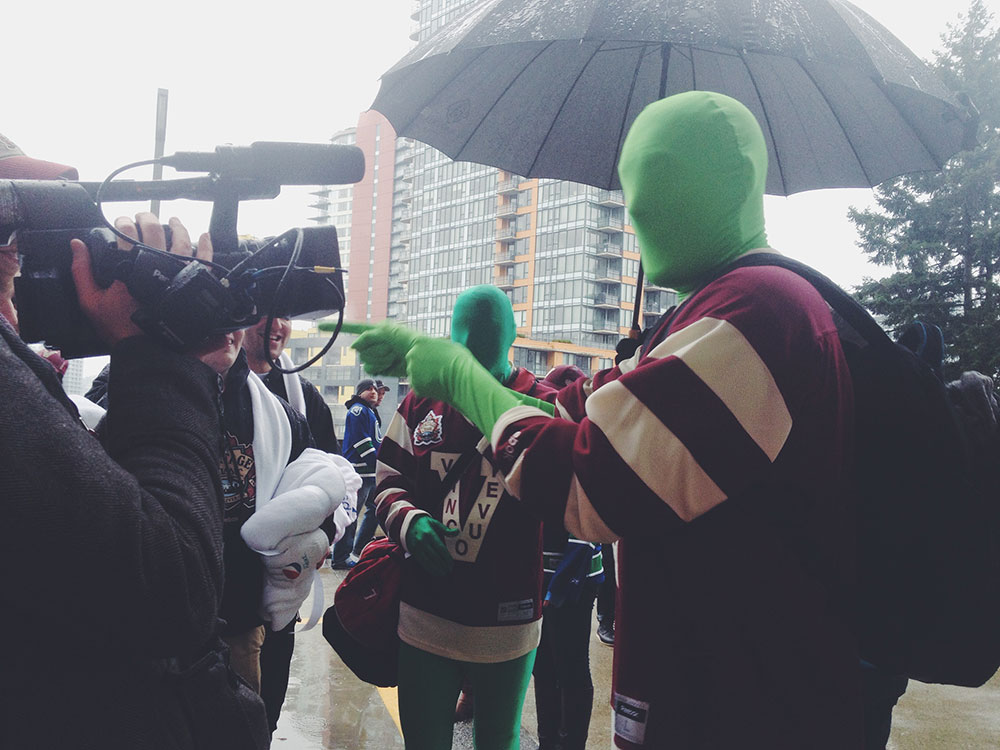 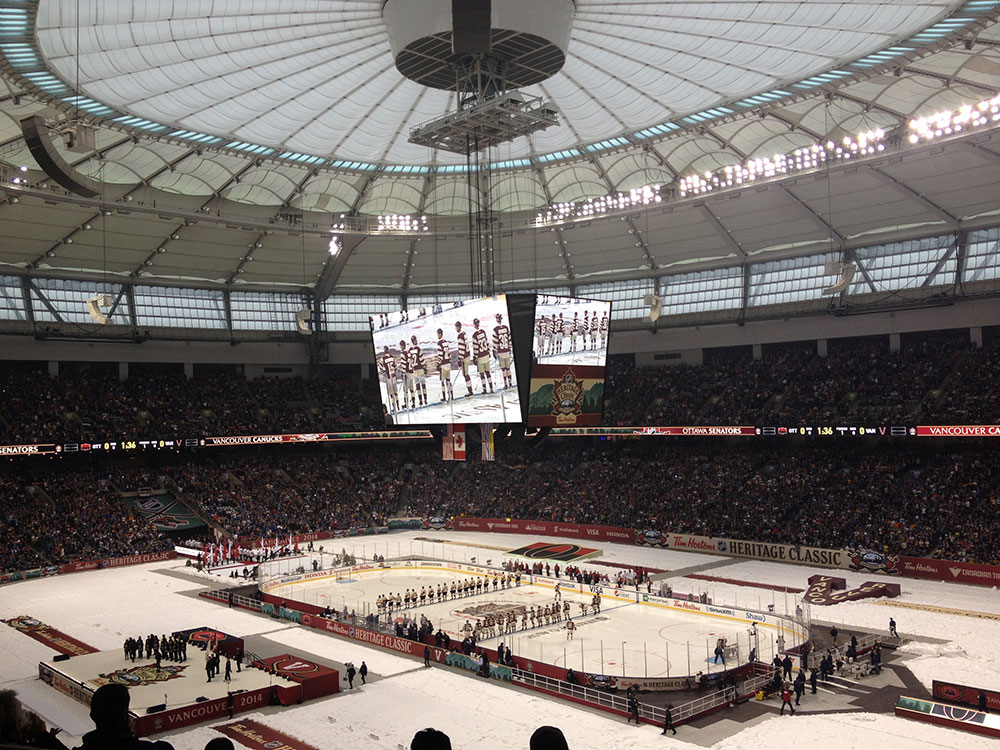 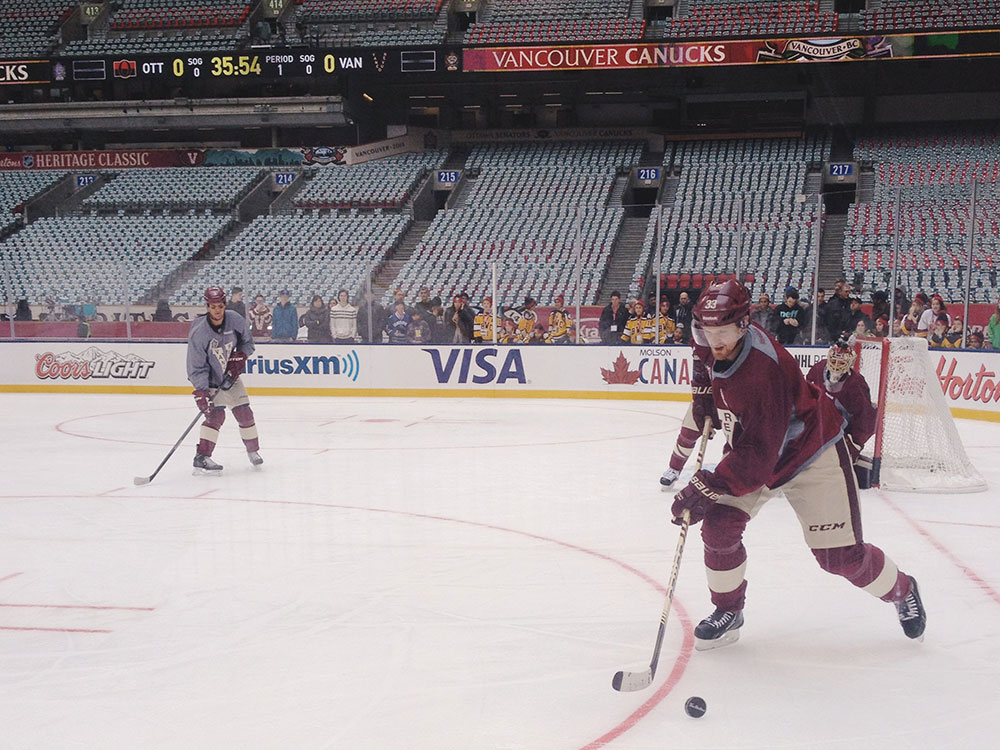 Once every four years, hockey takes center stage at the Winter Olympics. The best players in the world play for their country and fight to take home gold.

The game is a little different than NHL hockey. The rinks are larger–which is the European style– and they follow International Ice Hockey Federation rules, which have a few minor differences.

The most recent Winter Olympics were in in Sochi, Russia. Canada took Gold, Sweden got Silver and Finland won Bronze over the USA, while hometown Russia had an untimely early exit. Historically, Russia (USSR) and Canada hold the most Golds, but the USA has arguably the most famous Gold metal with their 1980 “Miracle on Ice.”

If you are interested in learning more about Olympic hockey, I highly recommend the new documentary, “Red Army” which is all about hockey during the Soviet Area, as well as ESPN’s 30 for 30 “Of Miracles and Men,” also on the 1980 Olympics.

The World Cup of Hockey is an international ice hockey tournament organized by the NHL. It’s hasn’t happened since 2004, but will be returning to Toronto in October 2016 with hopes that it will happen every four years from now on.

Similar to the Olympics, there will be six national teams– Canada, USA, Russia, Sweden, Finland and Czech Republic. However, unlike other international tournaments, the 2016 World Cup of Hockey will have two extra teams: an “All Europe” team—with players from countries that aren’t represents in the six national teams (e.g. Slovakia, Germany, Norway, and Denmark)—and a “Young Guns” Team—for the best players under 23 from anywhere. Any NHL player under 23 cannot play for their national team, so this team will be the best of the best in terms of young talent.

The National Hockey League is growing each and every year and as it grows these special events will grow with it. Hockey is the greatest and these events just highlight how truly amazing hockey can be!

Have you ever been to an NHL special event? Which Special Event Appeals to you most?