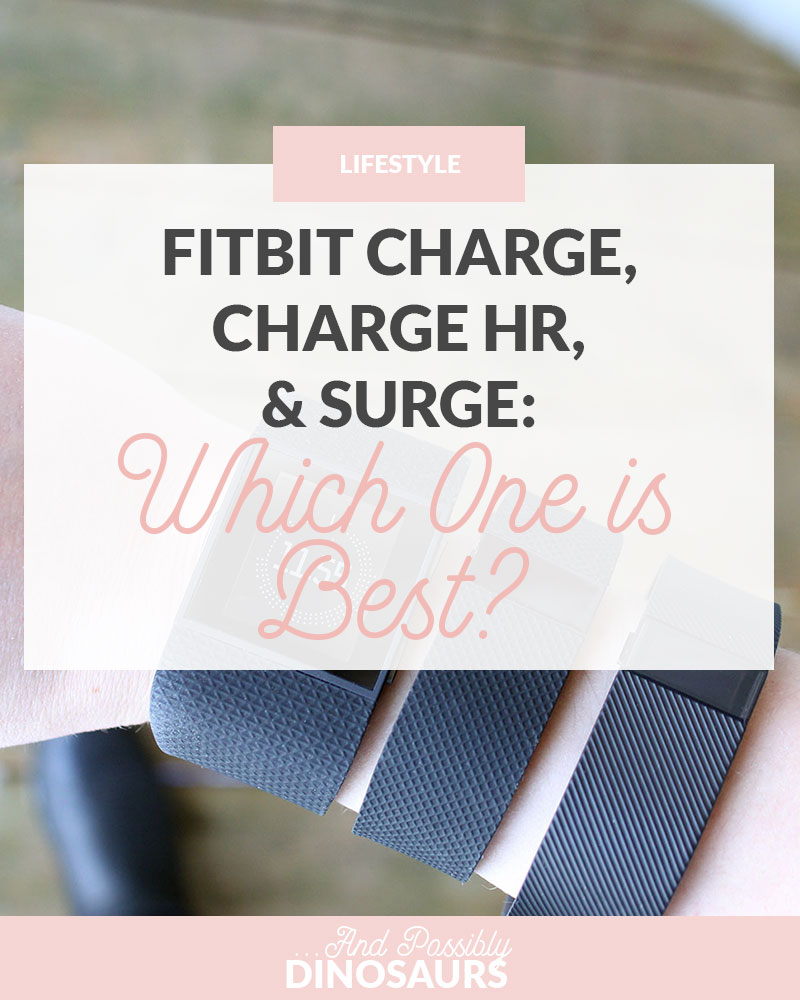 I, like most people, made being healthier one of my New Year’s Resolutions.

I knew I wanted a fitness tracker, and after months of deliberating, I decided on the Fitbit.

The next problem: which one did I want?

I knew I wanted something that I could wear on my wrist, so the Zip and One were off the table. I also knew that if I was going to wear it on my wrist every day, it better have a clock on it, so the Flex was out, too. The ones left, then, were the Charge, Charge HR, and Surge.

At the time, only the Fitbit Charge was available, so I bought it, figuring I might return it when the Charge HR and Surge come out.

They came out the day after I got the Charge in the mail. Womp.

Sean convinced me to get both the Charge HR and the Surge, try all three out, and decide after using them which one I like the best. I could then return the other two.

He’s such a bad influence on me.

So, here’s what I thought of each one. 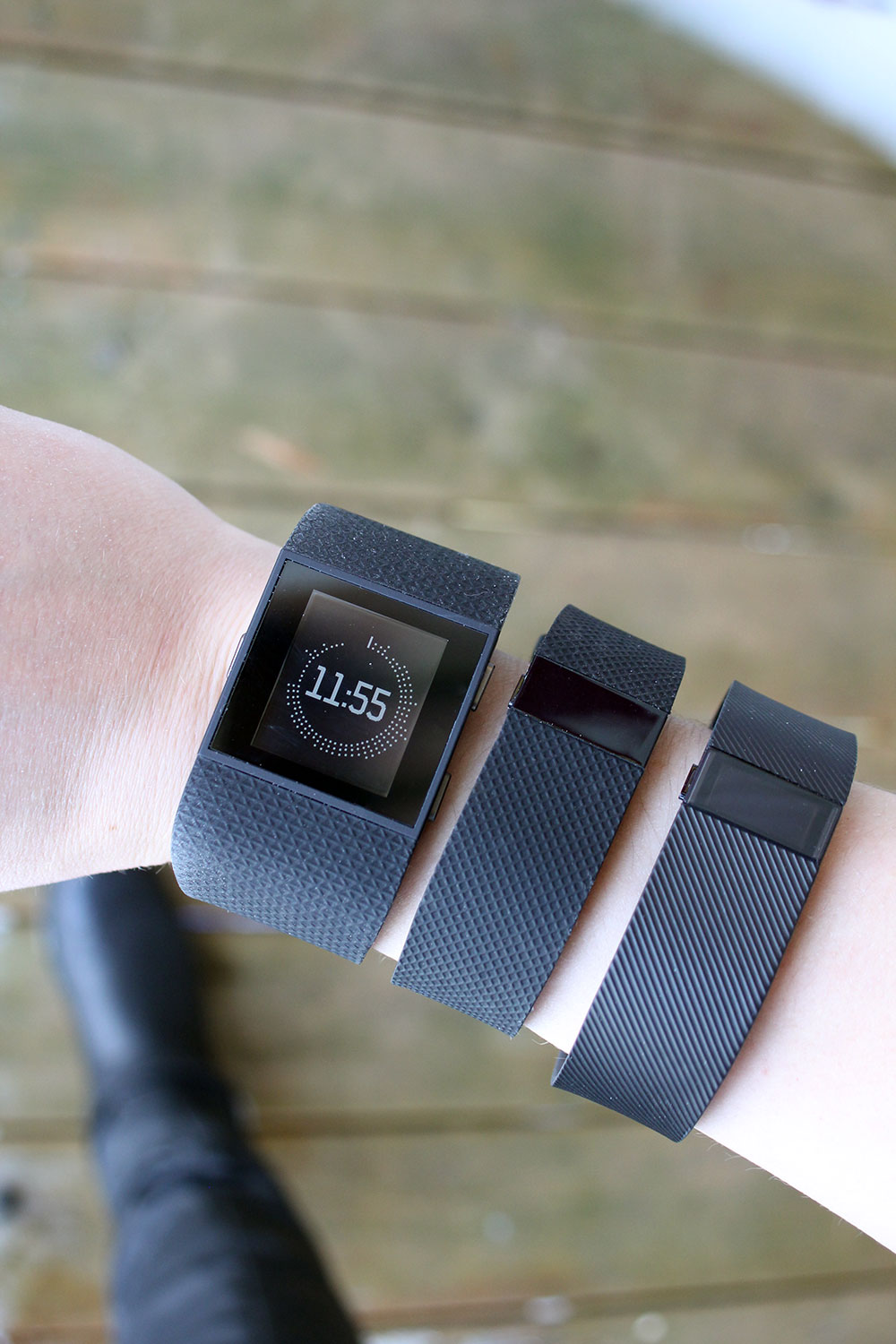 Originally, I thought I was going to just get the Fitbit Charge and not even both with the Charge HR or the Surge. After all, it registers how many steps I walk every day, how well I sleep, how many floors I’ve climbed, and how many calories I’ve burned. I don’t run, or work out really hard, so why would I need the heart rate monitor?

Well, I’ve got high cholesterol, so I need to do more cardio. I still don’t like to run because I have asthma, but I should still be getting my heart rate up.

Once I got it in the mail, I realized it was basically just a glorified pedometer. It does vibrate and tells you when someone is calling, but so do the other models that do more.

So, onto the Charge HR I went.

The Charge HR was properly named, because it was the first one to charge once I got the two high-end models in the mail.

The size wasn’t much bigger than the Fitbit Charge, but it stuck out a little more off my wrist because of the heart rate monitor.

The monitor gets a little annoying, but only if you strap the band on too tightly. If it’s loose like they recommend, it isn’t problematic at all.

I didn’t have too many problems with the Charge HR. You can set a timer for workouts, see who’s calling, and view steps, floors, calories, etc. on the screen, just like you can with the Charge. This one just has the added benefit of also tracking and displaying your heart rate.

However, once I tried the Fitbit Surge, I knew I couldn’t go back.

When I first saw the Fitbit Surge, I was totally turned off by how big it seemed.

It still took some getting used to, but I realized it isn’t much bigger in size than a regular watch I would wear. The grip makes it difficult, especially in the winter, because it’s hard to get sleeves over it, but that’s really the only downside I see.

I love being able to choose what type of workout I’m doing, so if I work out twice in the same day, I can see which workout was labeled “yoga” and which was labeled “hiking.” It keeps my dashboard organizing, which is awesome.

The other nice thing that the Surge has that the Charge and Charge HR don’t is the ability to receive text messages. I had a bit of an issue syncing my phone and my Surge when I first tried it. But once I restarted both, it hooked up right away and hasn’t had any problems since.

Also, now that I have a dog, I’m going to be going on more hikes and walks. (Note that I did not say runs. I am confident I will never find joy in running.) The Surge has built-in GPS, so I can see on a map where we went during the day, without having to bring my phone with me. The device does the GPS on its own; it does’t use my phone’s GPS, unlike some other performance trackers. This is especially fun as Stanley gets older, so we can see how long he’s able to last during walks as he grows.

And finally, the battery life. Given everything that the Surge does, the battery life is amazing. If you’re using GPS, it only lasts about 5 hours, but if you aren’t, it can last up to seven days! The Charge lasts 7-10, but doesn’t have all the bells and whistles; and the Charge HR only lasts up to 5.

I’ve been using the Fitbit Surge for almost a week now, and I can easily say the tracker’s size doesn’t bother me at all any more. It took me less than a day to get used to.

I highly recommend the Surge, but if you aren’t going to use all the bells and whistles, the Charge and Charge HR are great options as well.

And, just in case you’re curious about all of the features, as well as the products that I didn’t talk about, here’s a handy graph from the Fitbit website (just click on See a Full Comparison Chart): 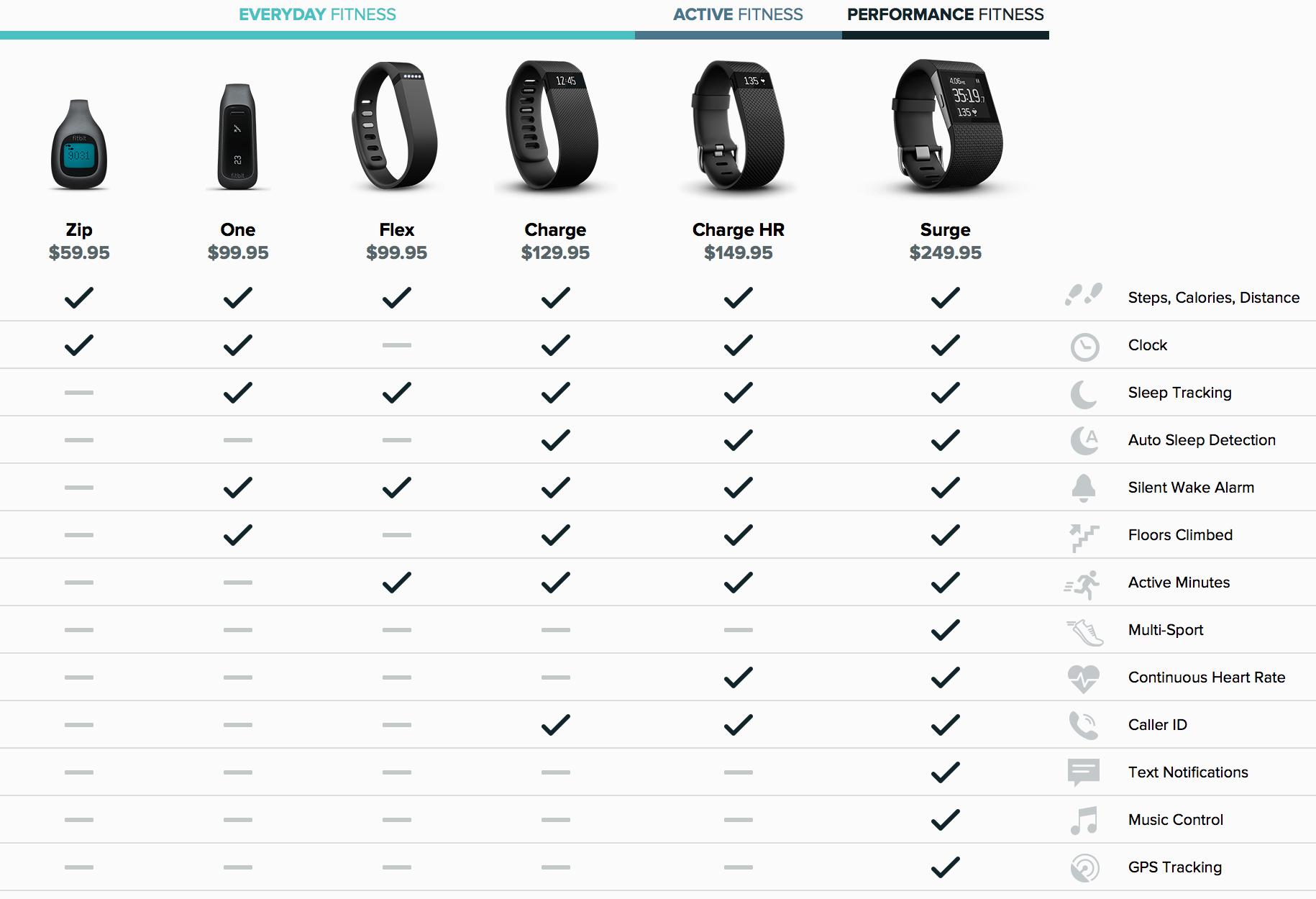 Do you use any of the Fitbit products? What do you think of them?