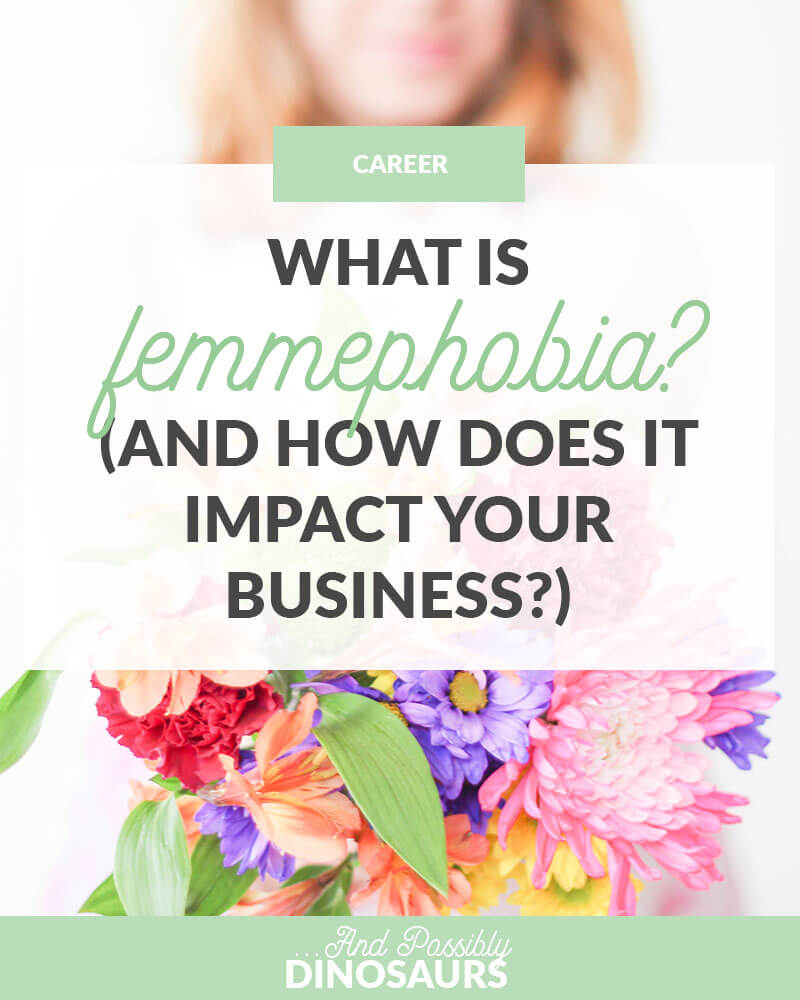 One of my favorite things about blogging and online business is how many women are empowered to run their own small businesses.

In fact, most of the blogs I read are written by women. And at my monthly blogging meetup, almost all of the attendees are female.

It’s awesome! And so encouraging to see how many women are rocking their businesses.

However, as women, there’s one thing we need to keep in mind when running our businesses, especially online: femmephobia.

So, what the heck is femmephobia?

femmephobia: prejudice, discrimination, bullying, violence, etc. against people who are feminine and choose to present as feminine

Basically, femmephobia is a hatred of girly things. The color pink, ribbons, bows, polka dots, baking, Hello Kitty… everything you picture when you imagine Zooey Deschanel.

Now, there’s nothing wrong with disliking those things. If you don’t want to wear the color pink, don’t. Prefer stripes over polka dots? Awesome! Don’t like putting bows in your hair? No big deal.

That’s not femmephobia… that’s just your personal preference. Femmephobia is when you start to make assumptions about or start bullying people who prefer those things.

The most common form of femmephobia is assuming overly feminine people are stupid or overly dramatic. (News flash: this typically isn’t true!)

Growing up, I noticed a lot of girls in my school were only friends with guys. It was intentional, and something they were super proud of. Their reasoning? Girls always start drama; guys are super chill.

And here’s a confession: I was very guilty of doing this in high school.

I had been on the cheerleading team since freshman year, and by the time football season was done junior year, I was done. I had been spending nine months out of the year with the same 14 girls, and I just couldn’t do it any more. So, I didn’t try out for competitive cheer that year.

It wasn’t that I hated cheerleading. In fact, I loved it! The gymnastics, the stunting… it was all a blast. I just didn’t get along super well with the other girls on my team. They weren’t mean or anything… we just had different personalities.

And that’s totally fine! People (of both genders) don’t always get along with other people. There’s nothing wrong with that.

There is, however, something wrong with blaming it on their gender. Which is exactly what I did.

I said I quit because the girls were too catty or dramatic. And then I insisted I was only friends with guys because they didn’t start any drama.

Just because they wear bows in their hair, wear skirts five days per week, and enjoy the ultra-feminine sport of cheerleading doesn’t mean they’re stupid or dramatic.

Actually, fun fact: most of the girls on my cheerleading team were in the top 10 percent of our class.

How does femmephobia impact my business?

So, now that we know what femmephobia is, what the heck does it have to do with blogging and business? A lot, actually!

As female business owners, it’s not uncommon for our brands to be at least a little feminine. Peonies, DIY projects, frilly dresses… these are all pretty common in the blogging industry.

And, thanks to femmephobia, people might be put off by that.

They might assume you aren’t a reliable source because of your white and pink website. Or they might think you have no idea what you’re talking about because you use a lot of script typography in your graphics. Or maybe they’ll click away immediately if they see too many photos of flowers.

(You don’t even have to be Lauren-Conrad-level feminine to experience any of this.)

But you know what?

One of my three main colors on my blog is hot pink. And it’s the primary color of my course, the InDesign Adventure Guide.

If someone doesn’t like my branding because I use pink, I don’t get super offended by it. After all, they probably aren’t my target market anyway.

One of the three topics I talk about on And Possibly Dinosaurs is feminism. If they think people aren’t intelligent simply because they like feminine things, they probably don’t want to hear any of my posts about feminism.

So as you’re creating your brand, just keep in mind that feminine elements will likely turn people off.

Are you okay with excluding those people from your target audience? Which is more important to you: reaching those people, or having those feminine elements in your brand?

People on the internet are cruel.

Another important thing to keep in mind is that, when hidden behind a computer screen, people can be especially cruel.

While I’ve been fortunate enough to not experience a ton of negativity aimed at me (though I’m sure it will happen soon enough), plenty of bloggers are targets of trolls and rude comments. There are entire websites designed to make fun of bloggers. (I won’t link to them here because I’m not going to encourage that bullshit.)

How insane is that?!

Thanks to femmephobia, bloggers and small business owners have to deal with hatred and bullying just because their brand has feminine elements. Ugh.

While I genuinely hope you don’t have to experience this, it’s important to keep it in mind.

However, I don’t think you should make your entire branding decision based on the comments you’re worried about getting from other people. The only opinions you should be concerned about are your own and those of your target audience.

After all, some people will find any excuse to make fun of other people. Even if your brand isn’t feminine, they’ll likely still find a way.

Femmephobia isn’t cool. There’s no other way to say it.

However, it’s something we have to deal with as business owners (for now), so it’s important to keep it in mind as you’re branding your business.

Have you experienced femmephobia before? (Or maybe you’ve been guilty of it in the past, like I have?) Let me know in the comments!