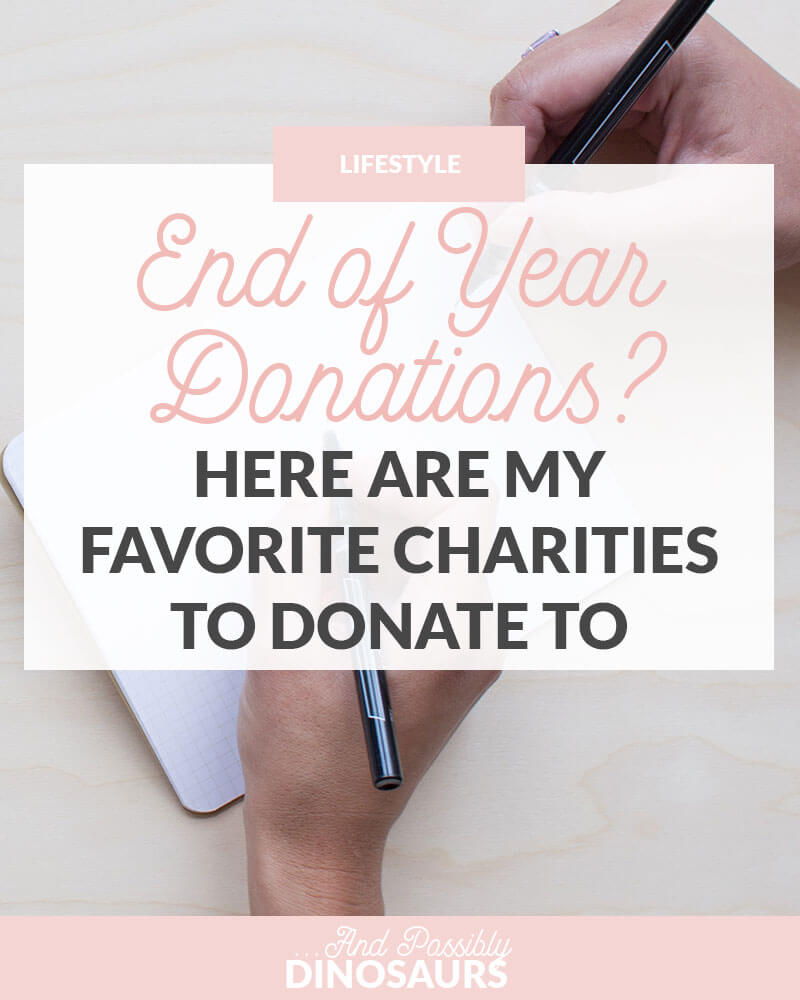 Ah, the holiday season. The best time to get together with family and donate the remainder of the money you have set aside for tax-deductible charitable donations.

Don’t get me wrong, that’s not a bad thing. Even if you’re donating for totally selfish reasons like a tax write-off, you’re still helping people.

It depends on the charity you’re donating to. After working for several different nonprofits, I’ve learned a lot about which charities are deserving and which are… less so. Here are my favorite charities to donate to!

Because different causes are important to different people, I’m going to highlight many different types of charities to donate to. Some are local, some are national, some are international. Some work on specific causes, others are more general.

As always, I encourage you to look into any nonprofit you donate to. Don’t simply take my word for it; do your own research as well.

My Favorite Charities to Donate To

LIGHT is a nonprofit organization that came out of the award-winning documentary Blood Brother (which is available on Netflix and is highly recommended). Rocky Braat is an American expat who traveled to India and ended up staying. He works at an orphanage with kids affected by HIV and is an all-around amazing guy. LIGHT helps fund his projects work the kids at the orphanage, from things like medication to making sure every child gets a cake on their birthday. He’s also working on creating additional living spaces for the kids once they get older and need more independence.

I know, I know. The controversial one. But hear me out: it’s not just about abortion. They also provide important things like birth control and STD testing and treatment. In some women’s lives, it’s the only health option. And they’re kinda struggling for donations now because Congress is trying to defund them.

Cystic Fibrosis is a personal cause for me, because one of my managers at my part-time college job has a son with CF. It’s a genetic disease that makes it really hard for those affected to breathe. Those born with CF are expected to live until about 40. The Cystic Fibrosis Foundation does research into cures for CF. Their goal is to make CF stand for “Cure Found.”

United Way is a quite famous and widespread nonprofit. They find a lot of different projects and have an awesome impact. Their three focus areas are education, income, and health, because without those three things, it’s hard to have a good quality of life.

When I studied abroad in Ghana back in 2011, I had the privilege of working with Beatrice in Kisseman, a village outside of the capital city, Accra. She spends her days weaving baskets and puts on an after-school program to help area kids succeed in school. Beatrice was never able to finish her education, and she wants to make sure the kids don’t have the same problem. She’s such an amazing woman, and I highly recommend one of her beautiful baskets. It would be a great Christmas gift!

GLAAD, or the Gay + Lesbian Alliance Against Defamation, is a nonprofit devoted to helping members of the LGBTQIA+ community find acceptance and overcome boundaries. They create media showing the heterosexual and cisgender communities what LGBTQIA+ members face every day.

Conversely, I recommend looking up a local LGBTQIA+ nonprofit to help those in your community.

The mission of Love146 is to abolish child trafficking and slavery. Pretty lofty, eh? But someone’s got to do it. They primarily work in southeast Asia, but do work all over the world. They help educate people around the world and provide survivor care after children have escaped.

We all know someone who is or has been in the military. It’s something that affects everyone. Fortunately, most of us have been able to see our loved ones come home. But what about those who haven’t? That’s where Folds of Honor comes in. They help fund scholarships for spouses and children of America’s fallen and wounded soldiers.

You may have heard of this little thing called the Refugee Crisis. There’s been a civil war going on in Syria for the past four years, and people are fleeing for safety. Syria Relief and Development provides aid to Syrian refugees. My good friend Sara has volunteered with them in Jordan and I cannot recommend them enough.

On a similar note, the UNHCR is an amazing organization that helps refugees all over the world. The refugees need our help, despite our nationality. They’re people, too.

What are your favorite charities to donate to? I’m always looking for new ones to support, so let me know in the comments!