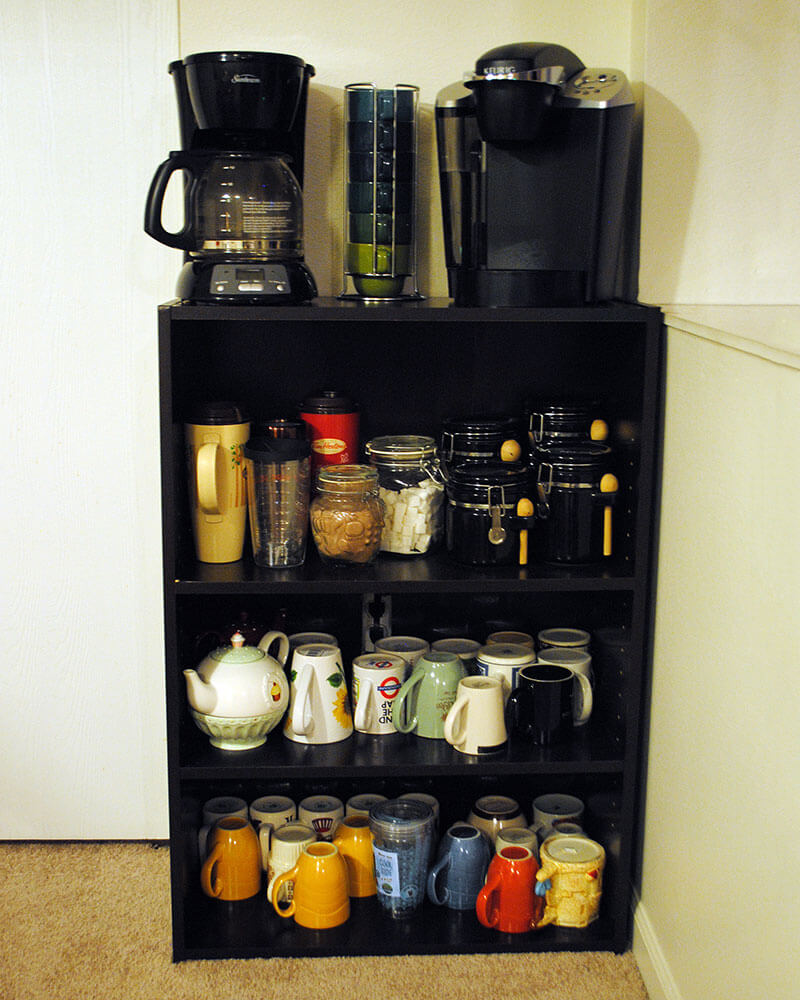 I’ve been seeing many different kinds of at-home coffee bars on Pinterest lately, and I kept thinking they would be great for when I move into a house. Then I realized I could easily make a diy coffee bar in my apartment, too.

I went to Meijer and got a three-tier bookshelf (similar) for less than $20. I put it together and cut a hole in the back where the outlet was. It fit into the space perfectly. Rather than putting the mugs on shelves above the coffee makers, I decided to put them on the shelves below.

How To Build a DIY Coffee Bar

The only modification I made to the bookshelf for my DIY coffee bar was cutting a hole in the backing so the outlet wouldn’t be covered. That way, I could drop both cords behind the bookshelf and plug them in without it having to be several inches away from the wall.

I found some jars at Goodwill to put different coffee grounds in, but they aren’t necessary at all. If you don’t want to spend extra money, you could simply put the bags of coffee grounds on the shelf! That’s the beauty of this DIY coffee bar: you can customize it however you want!

The space dictated a smaller bookshelf, so I could only fit my coffee maker and Keurig on the top shelf. I wish I had more space so I could put the coffee grounds and K-Cups on the top as well, but that can be a goal for a future apartment or house!

The best part of the DIY coffee bar is that it’s right by the door, so it’s easy to make a quick cup and head out for work!

Do you have a DIY coffee bar at your home? What’s your favorite feature?