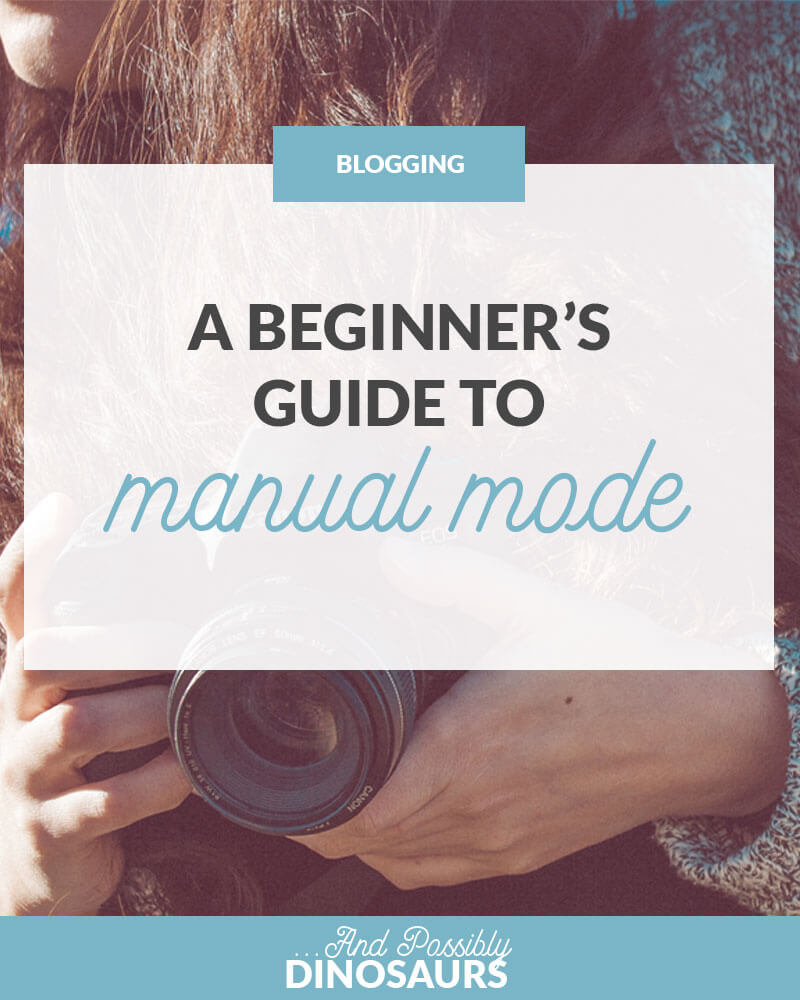 Manual mode. One of the most intimidating aspect of photography.

My first (and only) college-level photography class taught me the basics of DSLR cameras. And while I really appreciated the overview, we didn’t have to use it in class. If we had a point-and-shoot camera, we were able to do the assignments.

So my biggest piece of advice: once you get a little comfortable with the following, practice using them. If you don’t use it, you lose it. Or whatever.

Arguably one of the most important parts of photography is the lighting. It can completely make or break a picture. There are three different settings on your DSLR camera that affect the photo’s light: aperture, shutter speed, and ISO.

Some settings will automatically set your aperture and shutter speed for you.

Manual Mode, on the other hand, allows you to choose your own aperture and shutter speed.

In all modes, you must choose your own ISO.

So, what the heck do aperture, shutter speed, and ISO even mean?

This is how wide your lens’s shutter opens. The wider the aperture, the fuzzier the background and foreground become in your photo. So if you want a photo that shows all of the detail, no matter where the lens is focused (in a landscape, for example), use a small aperture.

Here’s the slightly confusing part: the smaller the number, the wider the aperture. It’s because the values are fractions, and the value shown is the denominator. So, f/22 is much smaller than f/1.4. Make sense?

Here are two photos, one taken at f/22 and one taken at f/1.4. These were taken in Aperture Priority mode, so the shutter speed was chosen by the camera. 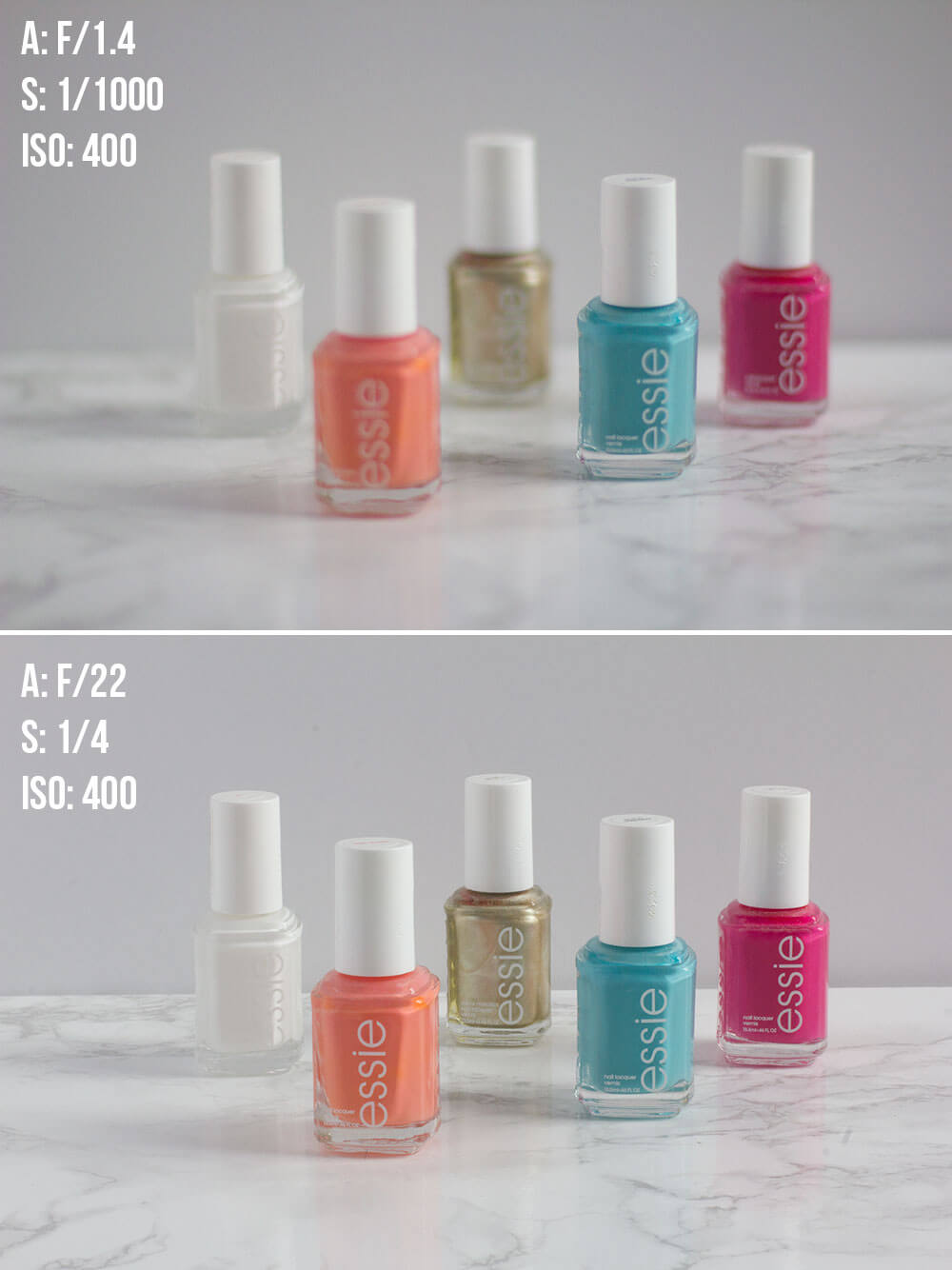 So the important things to remember about aperture:

Got it? Let’s move onto shutter speed.

So, aperture is how wide the lens’s shutter opens. Shutter speed is how long it stays open. The number that appears is how many seconds it stays open. 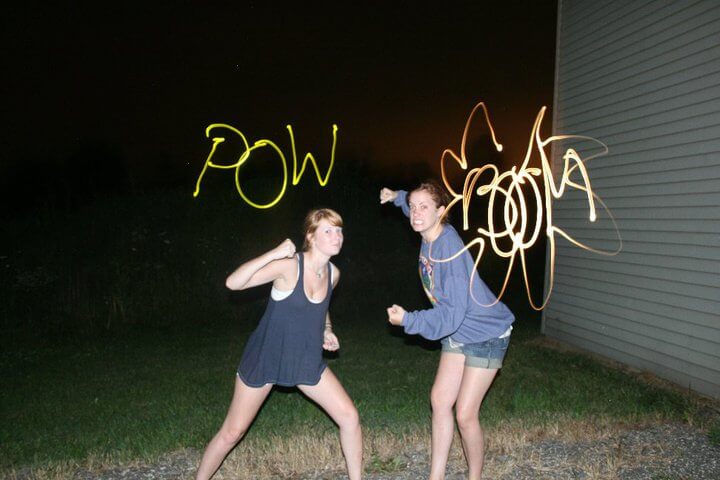 It’s important to note that 1/60th is the slowest the shutter can open while the camera is being held in your hands. Slower than that, you’ll be able to see shakes based on your body’s natural movement. So, if you need a slow shutter speed, you’ll want to use a tripod.

I should mention, too, that for the bottom photo set at 1/4, I had to use a handheld remote. Even pressing down on the camera’s button made the camera shake enough to show motion lines. I recommend not going much lower than 1/60 if you can avoid it.

Okay, one more to look at: ISO.

Keep in mind, though, the higher the ISO value, the more “noise” will appear in the photo. And noise is no bueno.

Manual Mode: Putting It All Together

So, how do all three of these settings work together? Well, they all affect how much light is let into the camera when the photo is taken. So we have to use the correct combination of all three to let in just the right amount of light.

Sounds a bit daunting, right? Luckily, there’s a helpful tool right on your camera to help you figure out how much light is enough. It’s called the Exposure Value Guide, or EV Guide. On my camera, it looks like this:

I prefer to choose two that are most important to me for that specific photo. Typically it’s ISO (I want as little noise as possible) and aperture (I want some depth of field, but not too much). Then I have more flexibility in terms of which setting to adjust. I’m usually taking blog photos, so I can use a tripod and motion blur isn’t a factor. So I’ll change my shutter speed based on what I want my aperture and ISO to be.

Here’s a handy guide if you can’t remember which settings create more or less light:

You want an even mix of more light / less light so it doesn’t get blown out.

Want some more examples? Here are those same nail polish bottles, with one factor changing.

So, the higher the ISO value, the brighter the photo gets / the more light is let in.

So, the faster the shutter speed, the less light that is let in and the darker your photo will be.

So, the wider the aperture, the more light your camera captures, and the lighter the photo.

Whew! That was a lot of info. Feel free to download the PDF of the DSLR Cheat Sheet (with instructions!) below! What questions do you have about Manual Mode? Does it make sense?