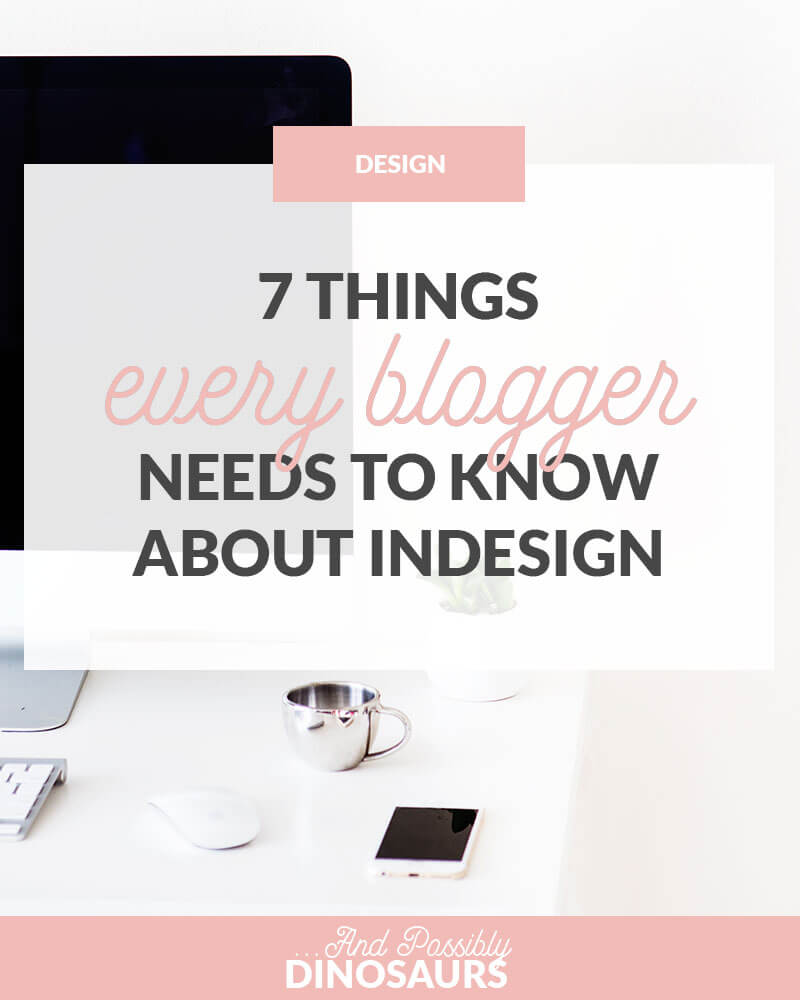 There are a lot of great tools out there for bloggers to use. Plenty of them are talked about everywhere: Leadpages, Photoshop, Mailchimp, ConvertKit, etc. But it seems like a big one is missing from the discussion: InDesign.

A sister program to Photoshop, Adobe InDesign is an amazing tool for bloggers and business owners. It can be used for a ton of different things: content upgrades, ebooks, image templates, and more.

So, why isn’t anyone talking about it? And what all do you need to know about InDesign as a blogger or business owner? Well, let me tell you.

InDesign isn’t as scary as it seems

Okay, let’s be honest. All new programs are intimidating. Shoot, I just downloaded Keynote for the first time and I’m a bit nervous to open it. But it’s probably super easy, right?

Well, good news. InDesign is actually quite easy. In fact, there are times in college when I wrote up papers in InDesign instead of Microsoft Word because I liked it better. Yeah. It’s that easy.

Everything is customizable, so it’s super easy to move things around on your page. You don’t have to try to line things up based on where text is; even the text can be moved around where you want it.

To be honest, a lot of it is drawing shapes and changing the colors. Eat your heart out, kindergarten-age-Caitlin.

PS Did I mention I’m giving out a free ebook template to make InDesign even easier for you? Grab yours below!

It is an awesome way to make passive income

You’ve heard of passive income, right? You make something and invest a bit of time into it at the very beginning, but once it’s up for sale, you don’t really have to do anything.

Think things like ebooks or planners. You’re going to spend a ton of time perfecting it at the beginning, but it really doesn’t need any work after you’ve posted it online. So, you’re getting paid while not having to do any continuous work. Pretty amazing, right?

Well, InDesign is an amazing tool for those projects. It’s perfect for creating things like ebooks and worksheets. (In fact, that’s what it was designed for.)

Use InDesign to take your blog to the next level. Enroll in the InDesign Adventure Guide!

You can create multiple pages, add automatic page numbers, and link text boxes together so it functions just like Microsoft Word. But you can add images, change the colors, and really customize it however you want. It’s amazing how many different things you can create with it.

Oh, and because I love and appreciate you, here’s a free ebook template just for you.

InDesign can be a better tool than Photoshop

There’s a lot of love for Photoshop out there in the blogging community, so hear me out. I totally love Photoshop and couldn’t imaging blogging without it. In fact, I create all of my blog post images in Photoshop. But that’s because they’re photos. Get it? Photoshop? Photos? It’s part of the title.

Well, similarly, InDesign is used for designing things. Now, that’s a little more vague than Photoshop, but that’s because there are so many options.

First of all, you can create multiple pages. This is great for ebooks, obviously, but it’s also awesome for content upgrades. Imagine you want to create a worksheet, but you’ve got so much great content that it has to be two pages long. In Photoshop, you’d have to create two separate documents: one for page one, and one for page two. High-maintenance, much?

But that’s not the only benefit InDesign has. You can also make your documents interactive. It’s seriously the best.

Imagine you’re creating a content upgrade, and you’ve got your logo on it for branding purposes. Great idea! Now what if we created a link, so your audience can open up that PDF and click on your logo to load your website. Awesome, right? You could do that for text, too. Say you’ve got a question, and for more details you recommend they check out a blog post you’ve written. Make that a link, baby! Now they don’t have to copy and paste a random URL into Google Chrome to get to your awesome post.

Oh, and did I mention forms? It’s like, my favorite part of InDesign. You can create actual text boxes on your worksheets so people can fill out their answers right from their computers. No need to print it out! Sure, they can print it out if they want to. But they don’t have to by any means. Plus, they can go back and change their answers if they want to. It’s a win-win!

It has got a lot of the same tools as Illustrator

The other program in the “big three,” as I call them, is Illustrator. It’s another awesome tool, but I rarely use it. Why? Anything I’d use it for is also available in InDesign.

We discussed how Photoshop is for photos and InDesign is for designing. So it shouldn’t come as a surprise that Illustrator is for illustrating. But here’s the thing… there are plenty of illustration tools in InDesign, too. For example, one of my favorite (albeit hardest to master) tools is the Pen Tool. It’s available in both Illustrator and InDesign. So, why would I open up Illustrator to draw something if I could do the same thing (and more) in InDesign?

(Seriously, those who use Illustrator on the reg, please let me know what I’m missing.)

InDesign is totally worth the investment

I won’t lie, Adobe Creative Cloud is kind of expensive. At $50/mo, you’re probably thinking it’s not worth it, right? Well, I have to disagree.

First of all, that $50 covers every single Adobe program. Photoshop, Illustrator, InDesign, the works. If you just wanted to go with InDesign, it would only cost $20/mo. Getting better, right?

Now let’s look at the alternative. You hire a designer to create your content upgrades for you. How much would that cost?

P.S. Interested in learning more about InDesign? Enroll in the InDesign Adventure Guide for just $197!

It can help you create a cohesive brand

The thing I love about InDesign is that it uses vectors rather than rasters for a majority of its design elements. Say what?

Vectors are math-based lines and objects. Don’t worry, InDesign does the math for you. Basically, it means that you can make your objects as big or as small as you want without losing any quality. Need a 24″ by 36″ poster of your logo? Easy peasy. If you had done it in a raster-based program like Photoshop, though? No dice. It would come out super pixelated and look like shit.

I also use InDesign to create my own style guide for my brand. It’s got all of my fonts, colors, and logos saved in one vector-based file so I’ve always got access to them when I need them. It makes branding super easy and I always know my graphics are on-brand.

InDesign can really speed up your blog processes

While it may take some time to learn to begin with, InDesign can really help you speed up your blog process. Let’s take content upgrades, for example.

I’ve got a template that I use for my content upgrades. It makes the design process super easy for me. All I have to do is fill in the info and save it as a new document. Bam! Instant content upgrade.

If I had to create each one individually, I probably wouldn’t be offering content upgrades very often. But now that I’ve got my template, I can offer content upgrades with almost every post. How awesome is that?!

PS Did you miss your content upgrade? I’ve got you. Check it out.