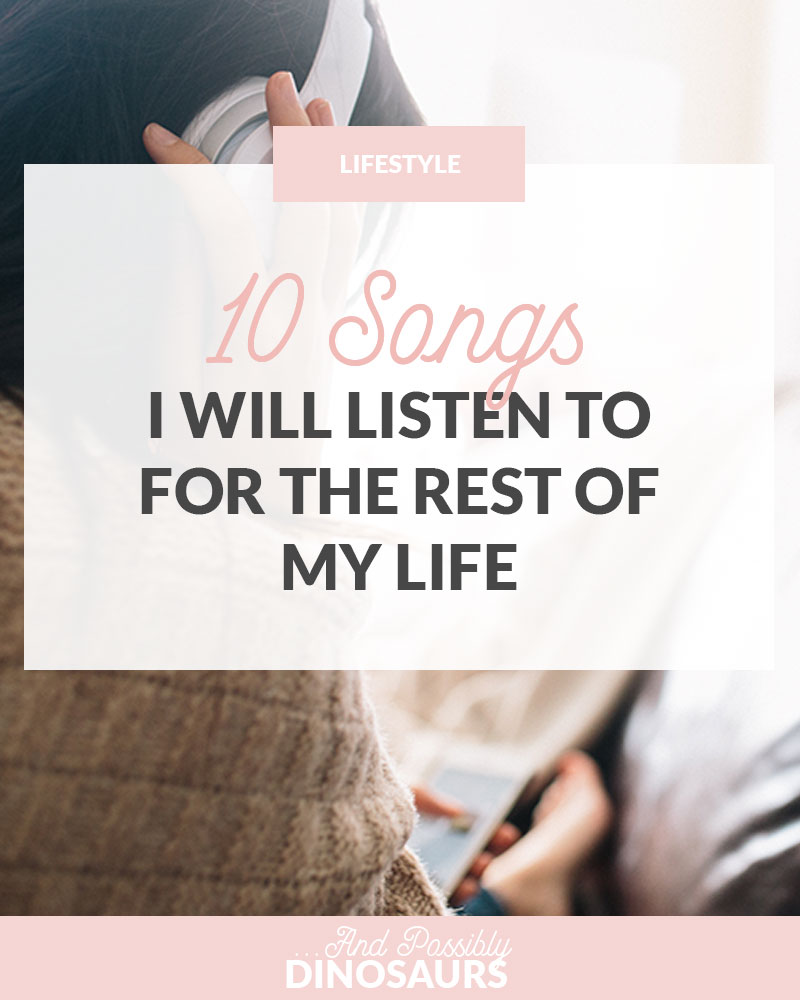 Music is such an important part of society. It’s fundamental, but it’s incredibly diverse.

Everyone listens to music, yet everyone doesn’t necessarily listen to the same music.

I’ve listened to a range of music throughout my twenty-some years. The boy bands of the 90s and early 2ks in grade school. Punk rock and screamo in high school. Folk and electronic in college.

Now I’m a weird mix of all of those categories.

I don’t really seek out new music any more. I’m good with whatever music plays on the radio, for the most part. (My high school and college self is cringing.)

And when I’m at work, I just put my whole iTunes library on shuffle. I love rediscovering old songs I loved that simply fell off my radar.

Some songs I’ll never get sick of. I might forget about them temporarily, but as soon as I find them again, I love them like no time has passed.

Here are the 10 songs I’ll listen to for the rest of my life.

Yes, really. I saw Hanson in concert with Randi back in 2010, and they’re seriously so impressive. And if you really listen to the lyrics, the song has an awesome message. Yes, I know all of the lyrics by heart.

That Green Gentleman – Panic at the Disco

The first Mumford and Sons song I ever heard. It’s such a solid song, and it reminds me of the week I spent with my sister in southern Colorado.

Picture this: you’re in an auditorium filled with 1,400 of your closest friends, watching a video about the life-saving programs you’re helping fund. On the screen, some people put flyers onto a plane, fly in the air, and throw the flyers out the window. Then all of a sudden the same life-saving flyers are being dropped from the ceiling of the auditorium. And Pompeii is blasting through the speakers. Now you understand why I love this song.

Once again, this song is full of wonderful memories. All Time Low will always be one of my favorite bands, and I loved discovering that this song is actually about Stella Artois, not a girl named Stella. Now every time I go to an ATL concert, my friend Kenzie and I always get Stellas. Except that one time the Intersection wasn’t serving Stellas and we almost cried about it.

Six Feet Under the Stars – All Time Low

The first ATL song I ever listened to. It’s their original sound, super punk-y, and just wonderful.

Your Hand in Mine – Explosions in the Sky

I will never ever ever ever get sick of Explosions in the Sky. It’s an instrumental group, so there are no lyrics to their songs. Yet somehow, as soon as you listen to it, you feel as though they’ve turned all of your emotions into music. They’re playing you your life story. It’s magical.

I Will Follow You Into the Dark – Death Cab for Cutie

When I was a freshman in high school, I decided this is the song I would dance to at my wedding. Didn’t know who the groom would be, but he’d just have to accept the fact that I chose our song in 2005. So far I’m still on track to have this song played at my wedding, whenever that will be.

Where Are You Now – Mumford & Sons

This song is so raw and honest, it makes me choke up just thinking about it.

Tearin’ Up My Heart – NSYNC

Once again, yes really. This is the first NSYNC song I ever heard, and I instantly loved them. The rest is history.

What songs will you always listen to? Let me know in the comments!